I want to share with you my recent development with Hubitat and Node-RED.

It is some generic nodes to facilitate the integration with Hubitat. The challenge was to found the middle between generic and easy of use. I will be very happy to have your feedbacks and discuss about how to improve it

Note that I keep this post updated with every release, no need to read all posts to know new features or changes.
You can look at the CHANGELOG for news

How to use it

If you have never used Node-RED before, follow tutorials. There are quick, funny and will avoid you pulling out your hair in the next steps. The debug node is your best friend to see message between nodes.

Installation of the module

Install node-red-contrib-hubitat from the menu -> Manage palette -> Install -> search for hubitat and install it.

You will have 5 real nodes and 1 configuration node:

My flows are not yet amazing but here a basic example:
Toggle light with only one action button: 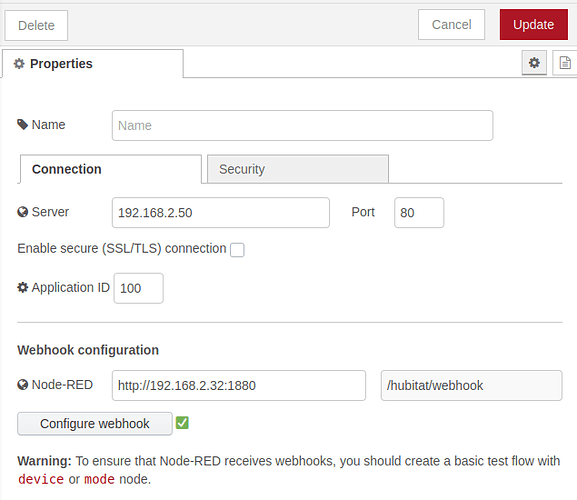 The second reads the state of my Outlet

The third does a switching logic 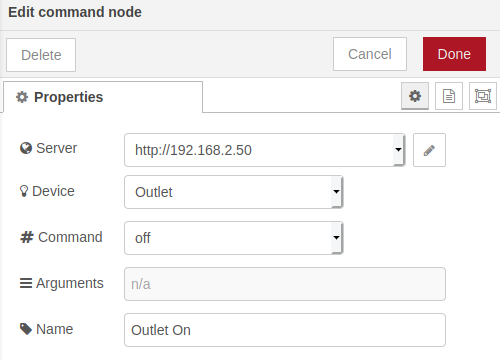 I lost patience after some misclicks with the Rule Machine and my friend @sylvainboilydroid just started to work on another Node-RED module. So, in theory, all I had to do was copy it ... so naive

I firstly copy a lot of code from node-red-contrib-wazo-platform, then read Node-RED documentation (I know, I should have done it first).
After creating the config and command node, I started to read the node-red-contrib-smartthings module and I found some good ideas. So I did a device node and refactor the config node which listen on the Maker API webhook.

Now the code has been so much refactored and improved that nothing is left of them.

There is a LOT to do and any help is welcome

How I personally use it

Here is my currently flow for all my devices

Here what cause me some trouble from Maker API

20 Likes
Hubitat Node now on Node Red
Calling all raspberry pi nerds (Bluetooth to WiFi)
BACnet integration
Lights off after no motion for X amount of time
Why did they leave out the opportunity to see graphs?
[RELEASE] Alpha WyzeSense Integration
Help with a new rule. Using speech device to hold a local variable
stephen_nutt February 15, 2020, 5:49pm #2

Sorry to have leaked your work with my post a few days ago before you were able to release your in-depth explanation in this post. This is great work!

A few quick comments from my 1st 5 minutes...

For reference, this is the example flow I am using for testing a single GE motion dimmer device:

Thanks for the feedback, really appreciated

Edited the answer of #2

Each device keep its state and will send event independently. If you have 4 devices node, then each one will output an event. If you don't want to send events for a node, uncheck the box "send event"

To be more exact, I have:

So I'm not sure why the single device node outputs 4 times. It may be correct, and I just am misunderstanding (?).

Also note that I get the same 4 outputs from that device node whether "send event" is enabled or disabled, which seems odd... This screen shot is from turning the light OFF, and send event is disabled on the device node.

Still got 4 event output from the block. 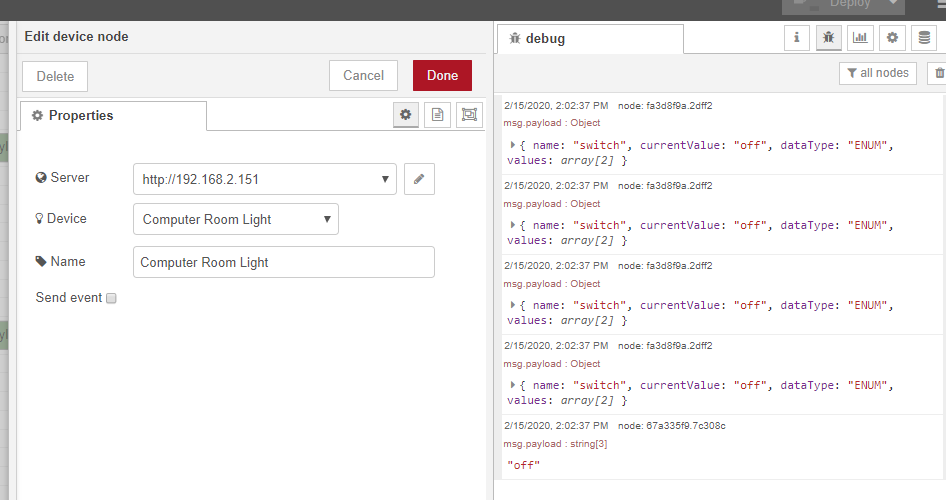 Ah sorry I misunderstood your scenario
Can you check if you device has 4 attributes switch with the API
http://<hubitat-api>/apps/api/<api-di>/devices/<device-id>?access_token=<token>
For mine I have 2 switch attributes and I receive event twice

Not four, but there are two, which is odd enough... 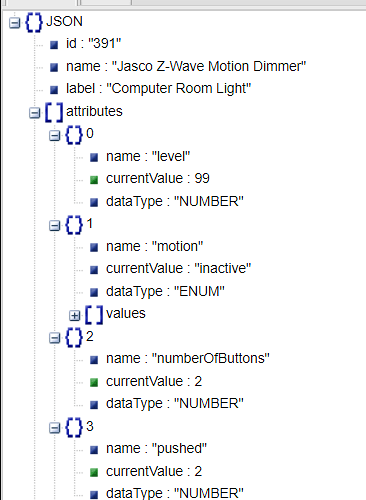 For the send events not working, I cannot reproduce it. Can you try another device and be sure to deploy the flow

Since I can only reproduce the two events issue instead of your four events issue, I cannot guarantee if it will be fixed. But you can test it and give me feedback

EDIT: Gotcha !! There is an issue with the unregisterCallback. If you redeploy the entire flow, it should be OK. I will fix it and release another version

I must be doing something wrong. How does the device node get notice of changes from Hubitat? I created a simple node just to get the status of a light using an inject node that runs every 5 seconds. It works and gets the status correct the first time. However, after I turn the light off, my simple node still says the light is on.

How does the device node get notice of changes from Hubitat?

By maker API sending a post event to node-red.
As long as the device is added to maker API, and maker API is configured to send post events to the proper address in node-red, the device node should get the event

So if that is all setup, maybe there is a new bug since this mornings version?

I am out, but will try the latest version when I get home in a few hours.

As long as the device is added to maker API, and maker API is configured to send post events to the proper address in node-red, the device node should get the event

Yeah, I knew that it was something stupid that I didn't do. Lemme see if I can get it to work now.

0.0.12 fixed the "send event" and repeated device node events. Thanks!

FYI that the device lists are still not in order, though. See below. This is after upgrading to 0.0.12 and rebooting node-red: 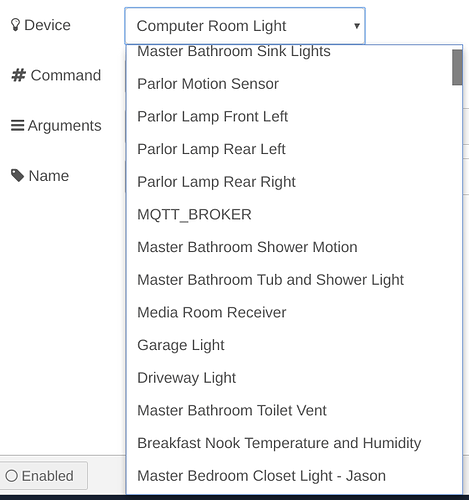 Also, for those setting it up, don't be dumb (like me) and forget to put your Node-Red port in the POST URL in Maker API config...

This was a great addition to Node Red when it was just a Command node. Now its even better. Thank you.

Ah well see, can you try to update the config node: click to edit the server and click on Update button, then redeploy. But I'm not sure to understand why, I'll check it tomorrow

@stephen_nutt Nice to see it works

I would love to have a dummy command to send and get back an event to verify that webhook is correctly configured. I'll try to think how to make this part easier

Ah well see, can you try to update the config node: click to edit the server and click on Update button, then redeploy. But I'm not sure to understand why, I'll check it tomorrow

Nope, still not sorted. Minor issue in the big scheme of things.

I even deleted the connection and re-made it, still not sorted.

Again, minor issue for now - it will wait! Only thing I can think of for you to check is to make sure you are sorting based on the Device Label, not the Device Name.

EDIT: I would guess you are sorting on Device Name based on how mine are sorted.

It worked on my dev environment because I was lucky...
Fixed in 0.0.13

0.0.13 fixed the sorting. Thanks!!! While minor in terms of overall functionality, that is a huge help when you have dozens/100+ devices in the list like I do!

EDIT: Never mind, what I asked was already in the OP.