It was webhook. I did not know I had a choice, until you said something. I clicked the websocket button, now it works.

For another NR newb

And off down the rabbit hole he hops

Ah, so check the switch for each before firing off the command! a lot to add, but its worth it! Cheers for that.

Its definitely worth it. My Good Night Routine is over 20 devices but usually only 4-5 are on so I query all of the ZWave Plus devices to see if they are on and it made the routine noticeably quicker to complete. For my ZWave non-plus devices, I just send the OFF command in case the state is wrong.

I think I may reboot now in reediness. I think this is the biggest flow I have up to now.

Automatically whenever they change in hubitat. In this case they happen to be life360.

I clicked the websocket button, now it works.

Just pay attention to the differences between the two...

I only use webhook.

any pointers on how to "fix" what ever was preventing it from updating when I was using wh?

If it isn't updating via webhook it is almost always a POST url config issue or a host firewall issue on the machine running node-red.

99% of the time it is the POST url. Users either put in the wrong IP, forget to put in the port, or other wrong info. Clicking "Confgure Webhook" only checks that it was successfully written to hubitat - not that the URL is actually correct.

Example from one of mine.

Also make sure you actually type in the ip/port info! The config node will show what it thinks should go in there in 'grey', but it still needs to be typed in and the config node updated.

How are you running node-red?

Synology NAS. I had the firewall turned off. I turned it back on, made the exception for NR port and now it is working.

something to keep an eye on, but thank you for the explanation of dif.

This may want to make you flip a table... lol

From what I see, you check all yours doors and windows to make sure they're all closed. I do something similar, except in 1 line for 9 doors/windows.

HA has this awesome little node called "get entities" which will scan a group and output every device in that group which matches the condition. I had been doing them the same way till I found this gem.

Fyi mine has an underscore in the path

Thanks for the help. I have been trying to do this in RM for months and think I finally got it in NR.

Fyi mine has an underscore in the path

If you cannot remove underscore from the input, it's because you have other config nodes that already bind the /hubitat/webhook
You can view all your config node in the Configuration nodes menu 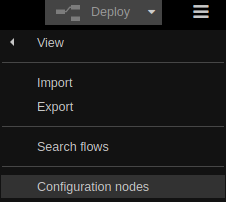 @TechMedX My 2nd hub has the underscore added to it. Do you you have 2 hubs connected to Node Red?

Yes, both my 'Devices' and 'Apps' hubs (the Apps hub has some zigbee lights on it too)

To be honest, the path name doesn't matter. But if you want to be clear in your config, you can change the path to /hubitat/devices/webhook and /hubitat/apps/webhook (or whatever you want to distinguish your both hubs) or leave underscore

I don't care what you call me, just don't call me late for dinner!!

Sadly I don't have that, looks messy but all its doing is outputting 1, and once we have 10, they are closed. If not, something isn't closed. Everything stops, and I'll be setting the mode back, so I can fix the issue, and run it again.

I do kind of miss my webCoRE for that, as that would tell me which had the issue.
But I want to try and keep everything in one place. My first run was last night, and it was rapid! So long winded, but works

Sadly I don't have that

Ya, it's a node in the HA pallet and once I learned about it I literally use it everywhere now. It could be a real useful addition to the HE pallet in the future.

My goodnight routine was always slow because it would send an off command to 30-40 lights, close command to all the garage doors, lock commands to 5 locks, alarm commands, led change commands, etc.. etc.. There'd be so much traffic on the zwave mesh it would take a solid minute to complete. With this node it checks everything against the state it should be in, creates a list of the ones that don't match and only sends the commands to those devices. My goodnight routine now completes in 5-10s.

Well, it would have been even faster than that if you checked the current state with the hubitat device nodes and then just sent commands to the needed nodes. As the device node always checks the cached value in node-red the only thing that would go to the hub is the actual needed off commands. Yes, it is a lot of nodes you have to put on the sheet though.

I actually find that vastly superior over the way the HA node does it. But I did use that node a lot when I was using HA more, and it is pretty convenient.

The same type of node, but just checking against the hubitat cache in node-red, might be interesting depending on how it worked / was designed.

I've been trying to think through suggestions to fblackburn on more access to the device/attribute cache... Still ruminating on it though.

Yeah, I would have gone that way if I hadn't moved all my Zigbee devices off HE.
I've too many unsupported devices, and sick of them dropping constantly.
I'm now running all Zigbee through deCONZ, and all is surprisingly stable.

If the trade off is large flows, for stability, I'll take it