Ran node-red-restart, error is still not changed. Do I need to install webhook on my the machine which node-red installed?

I failed to install " node-red-contrib-webhookrelay" in my Raspberry Pi. I don't know if I am able to install it, will that it help?

Can somebody else step in here and help @acucarestar? It's been a while since I set this up...

On it right now

I think there is some confusion of IP addresses and URLs here. Therefore, I have pasted images of my Hubitat (Maker API) and Node-RED Hubitat config node setup with explanations below:

Here is the Maker API setup on Hubitat:

Here is the Hubitat config node setup on Node-RED: 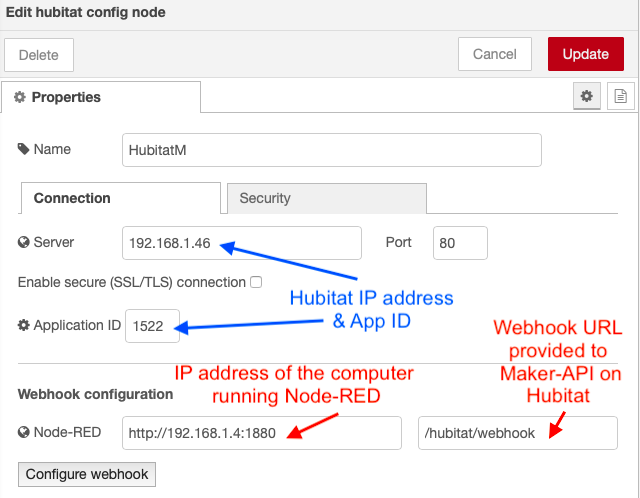 Make sure you enter the access token (from Maker API) correctly over here: 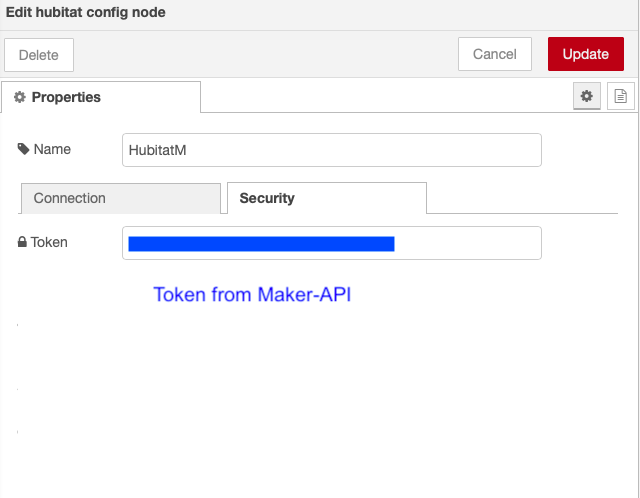 You do NOT need to have the node-red-contrib-webhookrelay palette installed on your Raspberry Pi.

10 Likes
SOLVED: Pulling my hair out over getting Node-RED integration working (AKA: Mode not initializing because the mode needed to be set in the Hubitat dashboard first)
acucarestar April 16, 2020, 8:01pm #1916

Thank you! The problem is resolved. The error is caused by mismatched app ID.

The problem is resolved

And welcome to Hubitat!

Thank you
To clarify (or add more confusion

), you do not need to fill this section (URL) in HE

I improved the error message to specify the reason. In your case you will see

It will be available in the next version

I asked a support question about the output of the Maker API (because it ends up coming through as output from the NR hubitat device node):

I have a question regarding the info from the Maker API. When I go the URL suggested under Get Device Info (replace [Device ID] with actual subscribed device id, I get the device info as expected. I am looking at an Amazon Echo device so there is a lot of information. Most of it is very clear how to use it if I wanted to. For example: { "name": "alexaWakeWord", "currentValue": "ALEXA", "dataType": "STRING" }, The value is a string and so I can do anything I might want to do with a strin…

I don't want to rehash the whole question here, but I did what to ask if anyone has built something in NR that turns what the Maker API calls a JSON_Object into actual JSON. I did the conversion by hand in that other topic and can imagine building a really complex parsing conversion function node, but I am hoping that someone else has already invented that wheel.

To be clear the device node is doing exactly what I would expect it to, but the Maker API is labelling something that I don't think is JSON as JSON, but I want the data that would be easy to get to if it were actually JSON.

I'm sure this is something insanely simple I have somehow manage to overlook or avoid dealing with until now, and has likely already been answered so please forgive me.

When using the command node to control google minis for TTS all spaces are being replaced with %20 so you have the voice literally saying percent twenty between every word. How do I prevent this? I've already tried replacing and wrapping with " ' \ / _ etc to no avail
Also the playtrack command fails (with a known and tested good mp3 file) so i assume its replacing slashes as well.

It is insanely simple. It doesn't work.

Instead use a Cast node. Node-red-contrib-cast

It will play mp3s. My family has to hear Darth say "I am your father" every time I enter house geofence.

EDIT; It's a shortcoming with Maker API, not the Hubitat Nodes.

There is an feature request here to support it.
I also added the link in the OP in the Feedback about Maker API

It is insanely simple. It doesn't work.

Instead use a Cast node. Node-red-contrib-cast

Ok and thank you.

Good Idea, hopefully that will save others some headaches in the future.

Yuck... installing a palette to do something so simple as a string conversion? A function node or a change node using JSONata (`$replace() function) seemingly would be much more efficient

I've created myself an odd issue in Node Red. I don't quite know how I did it but I managed to delete my Sonos Flow Tab. I was deleting some test tabs yesterday and must have deleted this as well by mistake. I only noticed when it stopped working today and I went to check what was happening and couldn't find it. Oddly when I searched for "sonos" devices in the flow search, it listed some nodes but no tab next to them and when I clicked on them it didn't do anything.

I have now restored it from a backup up file but now when I search the palette for Sonos devices there are 2 instances of the nodes and 1 of them seems to be an orphan that I can't access. It doesn't seem to be causing an issue but I'd rather tidy it up if I can. I have restarted Node Red but that hasn't helped. 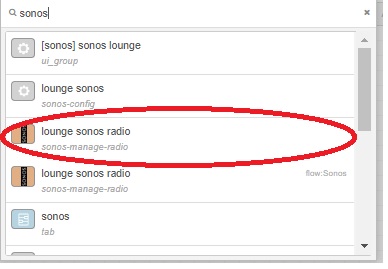 Maybe uninstall the palette then do a restore again? Also do you have duplicate configs?

One of the duplicates is a Hubitat remote though (not shown on the image above, it is further down the list) so I don't really want to uninstall the Hubitat palette as that will effect all other flows.

Do you have a full backup? I thought you were restoring from that otherwise yeah I get your point.