Your most rube goldberg automation (seems pointless but isn't)

This pressure at work great to detect presence when connected to a contact sensor (like the GoControl or Ecolink). Can be placed under a couch cushion or bedding ......

Not even close to Rube Goldberg but I have a NOAA Weather Radio that has an outlet that controls a relay - it closes the circuit when an alert is received. This is wired to the screw terminals on an Ecolink DWZWAVE2.5-ECO door/window sensor. That sensor then allows me to have a dashboard icon that goes red when there is an active weather alert and also send me a push message to let me know about it.

A similar setup using a Kidde Smoke Alarm relay allows me to get notified when a smoke alarm goes off.

This is a great idea that I should implement. I live in a hurricane zone. Can you please post a link to the weather radio with an outlet.

This is the website for the radio: weather radio R-1630 , Reecom Electronics, Inc.

This is the Rube Goldberg assembly: 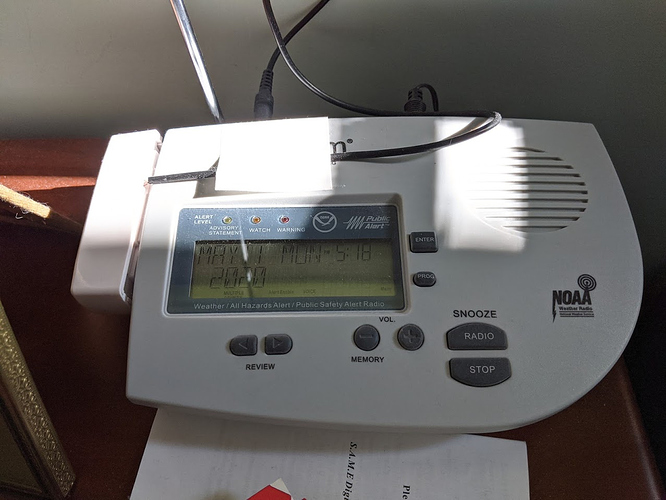 The wires from the door/window sensor go to a 1/8 inch phone plug that goes in the appropriate jack on the back of the radio.

So @Eric.C.Miller's really good idea reminded me that I also make use of a contact sensor with external terminals for an automation.

Background:
When my HVAC air-handler blower comes on, it makes it difficult for me to hear the Sonos speakers in my living room, so I wanted to transiently raise the volume for the period the blower is on and then lower it when the blower turns off.

What I did:
I passed the neutral for the air-handler blower through a split-core current sensor switch that is wired to the external contacts of a GoControl contact sensor (WADWAZ-1). The sensor shows as being open when the blower is off and changes to closed when the blower is on.

oh that is brilliant. thanks for sharing.

This automation also uses Node-RED, but it can probably be done using Hubitat and Maker-API.

Background:
I am kind of an energy miser and try to reduce phantom loads. I have two printers - a Brother MFC laser and an HP color laser. I don't like leaving them on all the time because I print very rarely (once or twice a week). So I've left the power switches on both printers on, but they are on controlled outlets (old Aeon Labs DSC06106 power monitoring outlets)

What I did:
I setup CUPS print spools for both of them and then wrote a shell script that monitors both the spool. The script runs every minute (via cron) and checks to see which printer is being printed to and the number of documents in the spool. It then sends that information via MQTT to Node-RED.

All the intelligence is at the Node-RED end. If the spool for either printer (Brother or Hewlett) is greater than 0, that specific printer is turned on (only if it was previously off). Five minutes after the number of documents in the spool becomes 0, the printer is turned off.

There is a possibility this automation will be improved significantly. @bcopeland has kindly agreed to look into creating a new driver for the DSC06106 with power monitoring. If that happens, then my automation will not have to wait a set amount of time before turning the printers off. Instead, after the document count is zero, it will simply wait for the power draw by the printers to drop below a specified threshold and then turn the switches off.

Rube? Gold? Iceberg. On the spectrum of automation users, at one end are the early adopters, happy to try and play. My wife and daughter-in-law, perhaps define the opposite end -- far past the dragged kicking and screaming into it, swearing how they know it won't work, can't work, doesn't work extreme.

To that end, they persist in turning non-automated light switches off and claiming the light then not working as proof automation doesn't and can't work. Foolishly, I tried removing the on/off knob to the offending lamps, so as to coerce voice or other available automation leverage. After I got out of the doghouse for doing that, I had a few laughs and success using this: 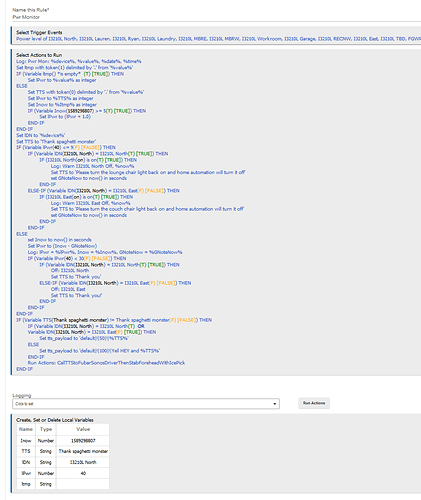 That is so far over my head. what the heck does it do?

It runs on change to the selected power sensors. I'd bought a group of I3210L sensors for their Zigbee and Z-wave repeater functionality.

They work fine as on/off switch. Their power level sensing is kinda meh, but not useless and passes integer values.

When I added a Fibaro FGWPB-111, it threw errors for passing decimal number values that I've yet found how to cast as other than integer. The set ltmp token(1) and first conditional are kludge solve that and round up, in sub-conditional, to set the local iPwr to %value%, the reported changed power level .

I set the local device name variable, lDN, for the reporting device and a TTS variable (Credit to @aaiyar talking about his use of tts_payload, upon which I explore) .

Next test whether the reported level is less than nine. In a perfect world a turned off device would report zero, but the plug on the east side of my living room is nestled among other EMP causing devices (Shhh. I officially have NO thermal nuke in the house. Don't ask, I won't tell).

When it's obvious someone turned the lamp associated with the on/off switch off, it makes a simple star date global variable and log entry and updates the TTS text to applicable PC "Hey, meathead turn that switch back on" text.

Else the power didn't go down, so I check to see if the offending switch was turned back on within my deemed appropriate time difference. If/when so, the automation turns the offending light switch (now on) off at the automation switch and sets the TTS text to encourage Pavlovian conditioning.

Last, but not least, when a TTS message is apropos, I send it. The primary media player sits near the two primarily offending lights, so using @aaiyar style, I'm using a delimited (by |!|) string to signify to Sonos which speaker, volume level, and text to speak.

I, ugh, send that to my RM rule where I, as many others do, continue to wrestle with the current Sonos driver issues...

To that end, they persist in turning non-automated light switches off and claiming the light then not working as proof automation doesn't and can't work.

I went the more expensive route. I installed smart switches but didn’t connect them to the load (or in the case of Inovelli switches I disabled local control). So now if somebody turns off a switch Hubitat turns off the appropriate light(s).

This also gives me a local button controller and indicator light when using a Red Series switch. In a couple of oddball locations I do the same thing with a Pico Remote. It gives people a button to push if the feel they need to without disrupting the automation.

I haven’t used a switch or Alexa to control lights in some time.

Makes automation accessible to non-dwellers of the home. They come to your party, and 'help you' by turning off lights as they exit. Unknown to them, it's automation doing the dirty work.

@lairdknox, I hear you. Wall switches are both delightful and first choice luxury. I'm running with Zooz Zen21 & 27s.

My adoption problem was that in the living room, an untrained/undisciplined user would turn off the literal old school lamp switch on the lamp where even a million dollar upline smart switch thus hath zero direct useful end-result effect. Had played with the idea of flashing the overhead lights, but that's not a positive teaching approach for my beloved, so opted to run this route.

I freely admit this merits potential to fully-qualified Rube Goldberg status label. It's been an enjoyable journey to learn several evolving capabilities and limits of HE. Had I mentioned the Sonos device driver is fubar?!?

FWIW, my half loves what the exterior lights and switches now do and she delights chattering with "Goober," as I call GA on GH

Had I mentioned the Sonos device driver is fubar?!?

You should get on over to Node Red. The Sonos implementation is great. I have music that follows me around the house now - based on motion sensors. I've removed Sonos from HE, and use it directly via Node Red now, for notifications and dashboard control and for grouping.

Ah, so not a wall switch but the switch on the lamp itself. Easy fix - run a little voltage to the lamp exterior and it will correct the behavior.

Hmm, you could make a custom solution but that doesn’t seem worth the effort. It would, however, fit the theme of this thread.

A shocking approach. Don't try this at home, kids!

run a little voltage to the lamp exterior

A lot of times you can unscrew the twist switches knob

A few years ago, I saw a photo of an outdoor pool shower. It was just a chrome plated 'spike in the grass' type, but it was able to make me say, I want an outdoor pool shower... But mine had to be heated. So I found a beautiful chrome shower head... it's 12" x 8" and only 2mm thick, stainless. Perfect for round the year outdoor. 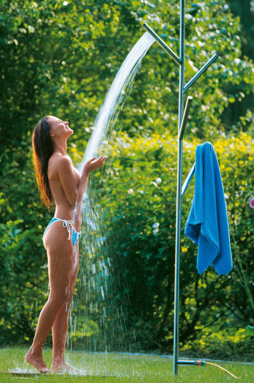 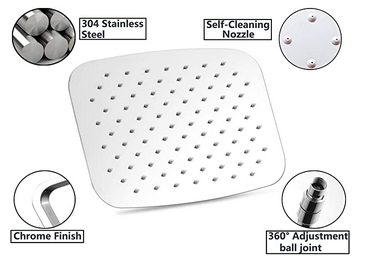 Then I found an outdoor safe tankless water heater, 240ac 30+ amps, able to raise the water by 35 degrees.

The Wall wart plugs into a ZWave in-wall outlet and turning it on opens the sprinkler valve and the water goes through the heater, up over head and to the shower head. The shower head is very light and so a simple copper pipe extended 4ft out over the lawn supports it, rain or shine. It's about 7ft off the ground and the water drops straight down, not much spread. I like it a lot more than the original inspiration.

There's a lot of automation around preventing the water from running for hours. I have a dead-man timer running that turns the outlet off every 20 mins, 'round the clock. I have a Virtual switch that Enables the primary button, which lets the water run for a max of 20 seconds. And there's another button that will turn it off on pressing, should I see it run when it shouldn't. A lot of redundancy, but I've only ever had it be on when it shouldn't 2-3 times in 3 years. Everything that turns it on is battery powered so an inconvenient battery death can cost $ in electricity and water. Again, the redundancy helps because not every battery dies on the same day.

Step on the bamboo grate, or push a giant green button (wired into an EcoLink contact sensor,) or push-and-hold a Hank single ZWave button and the Z-Wave outlet turns on for 20 seconds. The tap water is heated and everyone gets a nice rinse.

Button tells Hubitat which tells the Outlet which energizes the Solenoid to release the water that hits the flow valve in the heater to spray warm water for 20 seconds..

I love it. When I move to Florida one day I'll take inspiration from this