How to make a set of actions reusable?

Say I have the following set of actions

I want to make it so that this set of actions are reusable for any trigger such as:
When movement is detected
When Button is pressed
At every 12nn
...and other triggers and conditions..

What's the best way to go about this?

I don't use Rule Machine anymore but I believe you can create Rule A that does those 4 Actions without a trigger.

Then create as many other rules as you want with any trigger and the action for those other rules is to run Rule A. Someone else, please correct me if I am wrong.

This is exactly what I do. I have rules without triggers to turn on most of my light groups and scenes. This way I (or you) can call that list of actions from a button press, a dashboard, motion, timer, mode or whatever. I use light groups and scenes almost everywhere too. This way bulbs can be moved in and out, on or off the hub without breaking or editing any rules. Only update the effected group or scene. Rules are free and the simpler the faster.

RM, I believe was meant to be used like Legos™; each rule is a piece of a full automation. Back when I used webcore on that otherHub I would build rules with 20+ lines. Now I have maybe 3-5 short rules and scenes to do the same thing, but they're fast, reliable, and simple to upkeep.

tnx, but if i may ask, why dont u use Rule Machine anymore?

I started using it because its visual and makes more sense to me. I have kept using it for multiple reasons:

There is a great thread going but it is over 4k posts and is a lot of information to take in:

I want to share with you my recent development with Hubitat and Node-RED. node-red-contrib-hubitat It is some generic nodes to facilitate the integration with Hubitat. The challenge was to found the middle between generic and easy of use. I will be very happy to have your feedbacks and discuss about how to improve it

Note that I keep this post updated with every release, no need to read all posts to know new features or changes. You can look at the CHANGELOG for news How to u…

[Screen Shot 2020-07-02 at 6.00.09 PM] A Node-Red Introduction for Hubitat Owners I created a 9 minute "Introduction..." video to help first time Node-Red experimenters to get their feet under themselves. It's a brief tour of the Node-Red workspace and adding a Node to the Palette. Then there's a quick add of a flow for a Global Variable, then a second to use that variable to create a flow using Motion.

So i created Rule in RM w/o trigger .. but now on my button how can i trigger this Rule? I dont see an option for it in the Button Actions.... 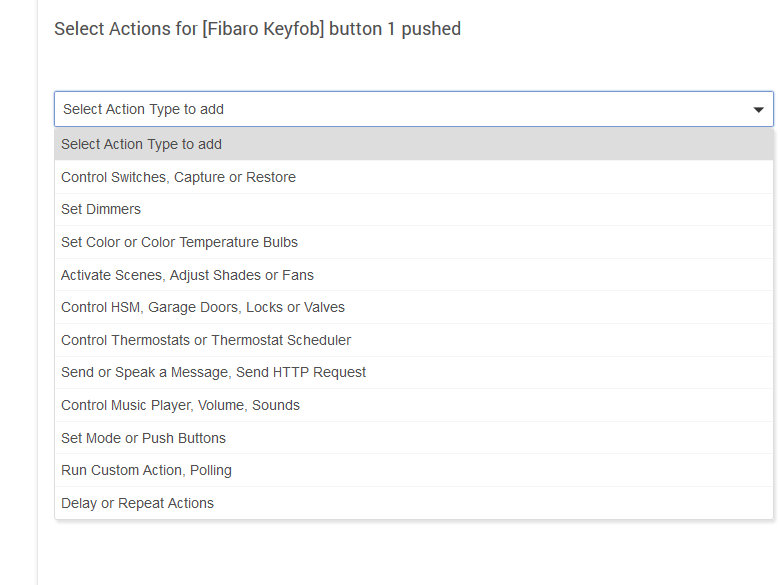 @tj1 To tie Node Red into what you are doing, you could create a sub flow with those 4 actions. Then create other trigger flows and that sub-flow is a single node and can be used all over. When your make change to sub-flow, it applies to all cases throughout Node Red.

tnx for introducing me to node red. I will definitely try this for my home build.

But for professional deployments such as this one (i install Smart Home stuffs for customers) i cannot use node red as it complicates things further. More moving parts = more things that could break or need maintenance and support (in a production environment) so i'm always looking for the simplest route more stable and less experimental route ... I dont mind spending hours tinkering and troubleshooting on my automation at home but i'd hate to have to do that to over 30 clients lol

So for this one, I wanna execute most my client's need with just Hubitat + 99% z-wave devices ...just to share. (unless i got Node Red wrong and it's being used in production/mission critical environments already.

I dont see an option for it in the Button Actions....

Is your hub running the most recent version of the hub firmware?

The options you have in that screenshot don’t quite match up with what I see when I open rule machine. The rule machine UI gets tweaked periodically as new versions of the platform are released.

However, “run rule actions” isn’t new, and so I think it should be in there somewhere. Can you check if it’s hiding in the “run custom actions, polling” sub-menu?

I agree; I definitely wouldn't use Node Red if I was installing professionally for clients.

Here is one more thread to help you get started for your home experimentation:

I'm opening this topic to ask if there's any reason to create a List of Modules for one's first installation of Node-Red. I ask because it seems there's a few new users to NR every few days and the Flows that are being shared often use a Palette item not on everyone's installation. Must Have: node-red-contrib-hubitat (Node-RED to Hubitat communication) node-red-node-rbe (continue down flow only if a value changes) node-red-contrib-noop (Simple placeholder node to help visualizations) Palett…

I have to respectfully disagree @tj1 and @stephen_nutt!

I am installing HE, Node-RED (and Homebridge) for my residential clients and it has been a fantastic experience. My oldest install is almost a year old. I have 3 in the wild currently and a 4th due to go online sometime soon. I also "sell" support services - remote maintenance is very easy. I cannot recommend it enough if doing residential home automation installation/consulting.

Now Home Assistant on the other hand - wouldn't let that near a client if I could help it. Still too complex for my tastes - although I guess I could see how someone could do it with a very locked down minimal configuration. I just don't have that kind of time. It is fun to tinker with though so maybe some future iteration will revisit.

Rule machine has a button device trigger, much like the separate button controller and basic rule apps.

It has more options for actions though, basically everything that’s otherwise available in rule machine.

But I think you’d need to use a rule to call other rule actions.

oh bummer .. i wonder why a button trigger can't just trigger a rule to run, doesn't make sense not to have it in there.. perhaps the devs missed this and we'll get it in future updates.

For now, how do you propose I, ultimately, run my RM Rules from a button action? Global variable stuff?

on my button how can i trigger this Rule? I dont see an option for it in the Button Actions....

You are looking in the action section - you will find the button controller as an option in the trigger section of the rule. 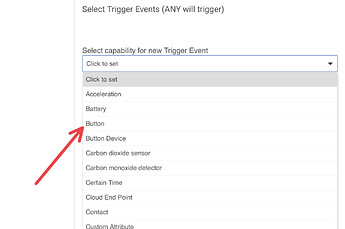 You can add multiple triggers to the same rule (Button press, motion, etc...)

Thus I created an RM Rule (no triggers) that does the actions i need.
Now i just need to trigger / run it from buttons and whatever ......

Basically, I need to run the RM rule from the one or more of my buttons and other triggers that are not part of the RM rule's configurations.

....I looked inside Button Controllers and BASIC Rules section and they both don't seem to have any option to RUN an RM RULE

The only way i seem to be able to do this is creating yet another RM RULE just for the button push, to run another RM RULE.. which feels weird.. but if that's how it should be then im cool with it

It is possible to setup a rule to trigger another one. Is this what you are looking to do? 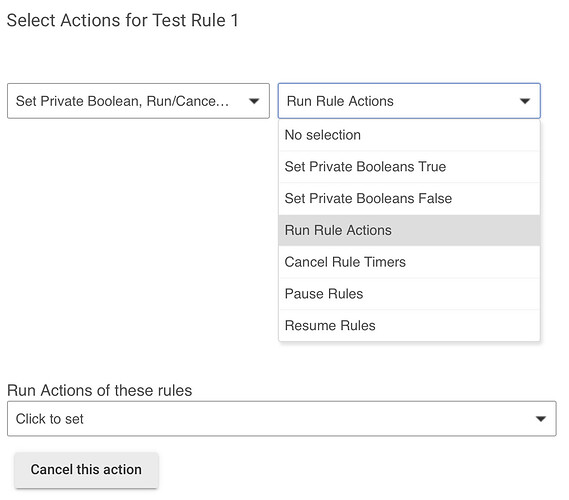 That First rule (Test Rule 1 in the example above) can be triggered by whatever you want (button press, motion, etc.)

Nope i pretty much got that already at first go. 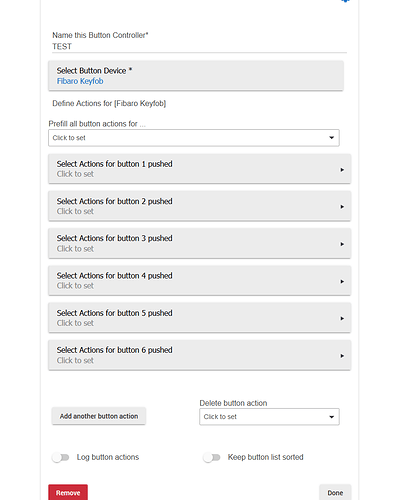 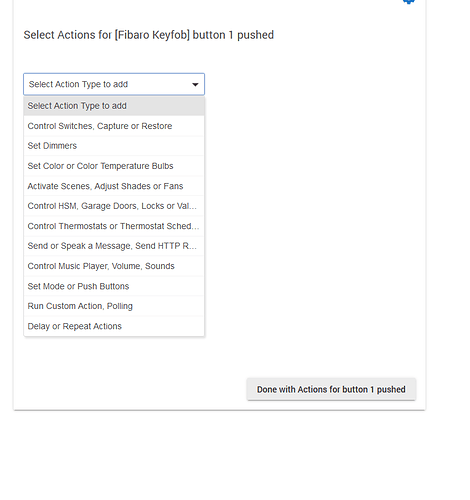