This small app will allow you to add a custom note(s) to any device under the Data section of the Device Details. Application is available via HPM or the following link may be used to import: 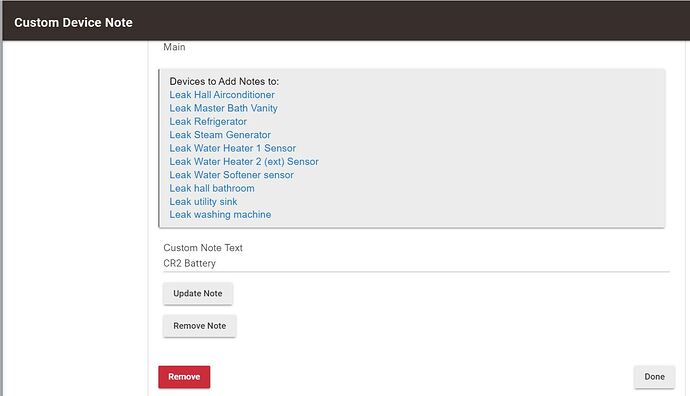 19 Likes
Add "Notes" field to devices
Add Device Name column in Device List
Suggested app - battery monitor
Save Yourself Some Money and Only Replace Your Device Batteries when They Die
[BETA] A Z-Wave Mesh Tool [C7 and 2.2.4+ Only]
[Release] Device Data Item Display
[PROJECT] Pre-Defined Dashboard Layouts (With Some Smarts...)
[RELEASE] Device Watchdog
Washing machine on a plug with power reporting?
Devices - Back on the "Battery Beat" - Ideas for HE to help us keep tabs
Comment field
What Battery Size Goes Where
Suggested app - battery monitor
terminal3 February 1, 2022, 5:34pm #2

Never mind I see what I am doing, I was trying to install as a driver and not an app

Are you adding it as an App or a Device. Should be an app.

Something you may consider. I installed the app and then opened just to see what it did. I then decided I really wasn't ready to add a note yet and my only option was to either select a device or remove the app. A cancel might be good.

Easy fix, removed the required:true on the input.

When I get a minute, I'll look at adding an option to delete the note. Should be an easy add.

Love this, great addition to Hubitat. An extra star for you today, @thebearmay.

It looks like the note has to be the same for all the devices selected. I'd suggest maybe one of two approaches:

FYI, had another instance where I added a note for a group of devices and the note didn't show up until I went back into the app instance and hit Update Note and Done again (had done so the first time). So there does appear to be some "reluctance" (maybe intermittent?) in the hub displaying the note initially.

Wonder if the device data is cached, and it takes a moment to force the refresh…

Neat idea. I would suggest adding conditional check around displaying the buttons so they don't display unless/until the note has been saved.

The submitOnChange can sometimes be slow and if someone clicks update before the submit refresh completes, the handler may get the addNote request before the note data is saved.

For the moment I’ve made it so that you can have multiple instances of the app and rename them as you see fit.

I added the capability to use your own name (will be converted to camel case) for the note, added the check for note text storage complete, and clean up some code. Should have in HPM in the next hour.

Had forgotten about this and I changed some batteries in some devices today and it seemed like it had not been that long. I remembered your app and just added a Battery Change note. This will be very handy. Now I won't have to try and remember when I last changed a battery, I can just look. Thanks

Glad that you find it useful.

Hey, @thebearmay. Just a quick heads-up...I am an entitled HE user who only thinks of himself (though on rare occassions I may briefly entertain the existence of other life-forms in the universe).

So now that you know where I am coming from...I'd like to ask you to do more uncompensated thinking and possibly work on my behalf.

The customNote name appeared as expected. Then I changed it to "BatteryType" and hit the Update Note button. When I did that I ended up w/two custom note names.

I hit Remove Note and the second name "BatteryType" was removed, but I can't find any way to remove the first custom name, "customNote"

I removed the app instance for the note, but the customNote name persists.

Any suggestions? (Aside from "Get a life.")

but I can't find any way to remove the first custom name, "customNote"

Did you try adding a new one with custom name "customNote"?

I just installed this app @thebearmay and added to Custom Notes. It seems like you either have to wait a bit for it to populate, or you have to click Update Note a couple of times.

Also, a question. The notes do not appear to be in any logical order. Here is one of my devices. The Custom Notes are BatteryDate and BatteryType.

What determines the order? Do you have any control over it, and if so, can you move the Custom Notes together?

Love the app so far!

The note actually is added to the device information, so removing the app has no effect; however, if you enter the note name exactly as it appears in the data section of the device, click off to the side (HE UI anomaly) to make sure the input field is updated, and then hit the remove button it should remove the note for you.

I am an entitled HE user who only thinks of himself (though on rare occassions I may briefly entertain the existence of other life-forms in the universe).

I know what you mean, us developers have the same life philosophy...