By request I've pulled the code for @bcopeland's excellent driver and have merged in several requested updates. (Thank you @jch for sending me a device for testing.) 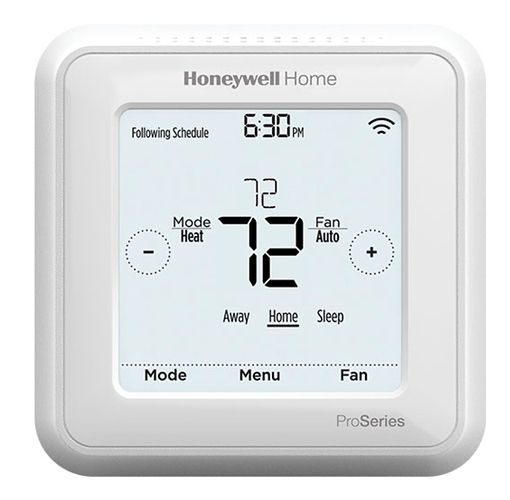 Available via HPM or for direct import from:
https://raw.githubusercontent.com/thebearmay/hubitat/main/bcopeland/Advanced-Honeywell-T6-Pro-Thermostat.groovy 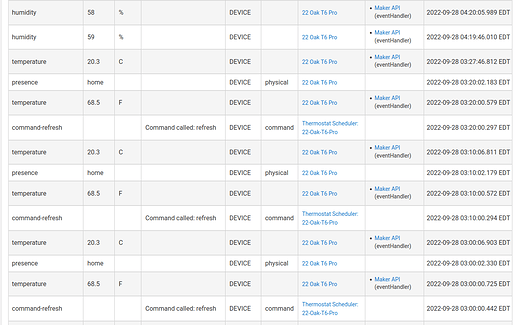 sched1302×819 145 KB
When I manually use the refresh command on the device page, that also causes a Fahrenheit temperature event.

Without calling refresh I'm not seeing many temperature events. Does the thermostat only report temperature events when the temperature changes by some value? Maybe I should have the Scheduler ask for a refresh periodically, even though it generates Fahrenheit events.

st a warning that I may need to ask you to help me more than normal.)

I'll throw it on mine

@thebearmay Not sure if this can be done with the Honeywell (It works with my Sinope though) Can the back light be controlled via z-wave? Use Case: At a particular time (or indoor lux level) when you walk past a particular motion sensor the back light of the thermostat will briefly come on for a set amount of time (lets say 30 seconds). As I said I do this with my Sinope, but wondered if it could be done with the t6...

This driver has a command button for the thermostat back light: Idle Brightness
Zero is off, Five is maximum brightness.

I do adjust brightness dynamically based on time of day, but leveraging Motion around the thermostat would great to

The variable configParam2 is an enum where 0->Fahrenheit and 1->Celsius, but the code at lines 461 and 494 and 567 all map cmd.scale as 0->Celsius and 1->Fahrenheit.
Maybe if I look at this harder I can make them match each other rather than being reversed.

Thanks, I’ll make that change, and then run through the code and make sure that it’s consistant.

Even though the Thermostat tile displayed a set point of 20C, the actual value sent to the thermostat by the driver was only 19.5C and that's where the heat shut off. Looking at the Driver event list showed command-setHeatingSetpoint command events, but the corresponding heatingSetpoint events were all rounded integers:

Those event numbers are the rounded-up values from above. The event says the set point is 20C, but the debug log shows that it's really only been set to 19.5C.

Checking the debug log, the thermostat is reporting temperatures to one decimal place:

It's the events generated by the Driver that have the incorrect rounded values.

I went back to the Thermostat tile and used the down-arrow; the temperature display went from 20C to 19.5C and stayed there (no rounding). I pushed the up-arrow and the temperature went back up to 20C. The log showed:

and the heat came on and shut off when it reached 20C. The Driver event list had showedthecommand-setHeatingSetpoint command events, but no heatingSetpoint events. The lack of events is why using the down-arrow in the Thermostat tile didn't round.

Something is amiss with rounding and event reporting. Surely the events should show the actual set points, not rounded set points? The rounded set point events fool the Thermostat tile into showing them even though they are rounded and incorrect.

Think I saw that code the other day when I looking for something else. Should be an easy fix.

Edit: Does changing line this around line 486

Does changing line this around line 486

Almost - I had to do the same rounding fix to the setPoint events on line 497 and 501 and that fixed the rounding for both thermostatSetpoint and heatingSetpoint (and for coolingSetpoint for next summer). Now when I use the Thermostat tile to move a half-degree, the generated event temperatures match the tile temperatures. (The Thermostat tile actually shows the temperature going from 16.5C to 17.0C and then immediately the generated event changes the temperature from 17.0C to 17C without the decimal. I suppose one could insert the Groovy equivalent of a printf("%.1f",...) to preserve the trailing .0 in the event, but it's good enough.)

Pushed up a new version with the rounding changes and changed the temperature format to a fixed 00.0

changed the temperature format to a fixed 00.0

If you use the %.1f format, I don't think you need Math.round or the *10/10 trick at all. The format does the rounding for you (if it works the same way in Groovy as everywhere else). There may be some disagreement on whether 0.05 rounds up or down, but who cares when it's only a tenth of a degree difference!

True I could simplify that. Thanks.

Something I can't figure out is why the debug log shows incoming temperature information from the thermostat that is not getting sent out as an event, even though eventProcess() is called right after the log.debug statement (lines 461-462). Does eventProcess() suppress duplicate events, so if the temperature is the same as last time eventProcess() just ignores it? Not what I want. Even though I have Thermostat Scheduler calling refresh every five minutes, I don't see any temperature event unless the value is different from last time. How can I force eventProcess() to create the event?

By default an event will not be created if there isn't a change in value.

By default an event will not be created if there isn't a change in value.

Can an event be forced?

This is a pain if I'm graphing the values, since if I pick a time range where the value hasn't changed, the graph is empty because there are no events in that time range. I really do want to make sure the temperature gets logged on a regular basis even if it hasn't changed. I suppose I can write a script to process the temperature event log and create pseudo-events to fill in the gaps, but I was hoping I could fix the problem at source.

It can be forced by adding isStateChange:true after the unit in the eventProcess() command. Think I have Grafana set to interpret a missing value as the same as the previous - forget what the setting was though.

Perhaps we could add a parameter allowDuplicate to the driver that when set would always display events, even if duplicate.

At the very least, a refresh should display all the events, even ones that haven't changed. (Or invent some other command that does this.) I'm not sure how to code that, but it might involve having refresh save and then set the allowDuplicate flag before it asks for all the values from the thermostat, so that as the values come back they all forcibly create events. (I'm assuming that values come back asynchronously?) After some period of wait time, restore allowDuplicate back to its original saved state.

Or something like that. I'm not a device driver coder. Yet.