Zigbee and WIFI channels overlap. You can use these to pick the best Zigbee channel for your setup depending on what WIFI channels are in use around you.

Cool. There have been many threads about this. I wound up on 25 & wifi 1 & 6. An xbee interference scan says I'm clean.

It’s also good to keep in mind that some devices don’t seem to like the highest channels (like 26), so while that can look appealing based on lack of wifi channel interference, it could create other problems.

26 is not a good choice for a couple of reasons. Only the newer devices support it and it has a government mandated lower power output allowance for that channel.

Pls don't be too harsh but need to ask a question, what for some is blatently obvious but...

I've had my Zigbee set to what I thought was CH24 and the WiFi on CH6 for a while now.

About 6 months ago, I purchased 2 x new HE's and all was good but recently I enabled the 'Zigbee Radio' for the 3rd HUB and thought I'd try CH22.

(I'd previously disabled it, thinking there was no need the run 2 Zigbee networks at that time)

About a week or so ago I finally received a range of new Zigbee devices I had ordered from Banggood just after the COVID outbreak thinking this would be a good chance to learn more about HE.

So back to the 3rd HUB & all is going well until I looked a little closer at my xBee's in XCTU.
I noticed that my xBee was on CH16 in XCTU and didn't line up with CH22 in HE but did match part of the number (in hex) to the left of the channel number in HE.

Could someone help me to understand this a little better pls?

@chillibenny After you make a Zigbee radio change it takes a while for all the devices to update.

I understand that part but why 2 numbers in Zigbee Settings and which one designates the actual channel number?

The channel numbers shown in the Zigbee settings dropdown list are in decimal notation. The current Zigbee channel is displayed in both hex and decimal notation (in your example, 0x16 is the hex representation of 22 decimal).

Thank you lads for your help

If you have never converted Hex to Decimal or vise-versa, you can easily do so by using Calculator in Windows.

Go to the "hamburger" menu, select Programmer, and click on "Hex" name. Type in 16, and this is what you get: 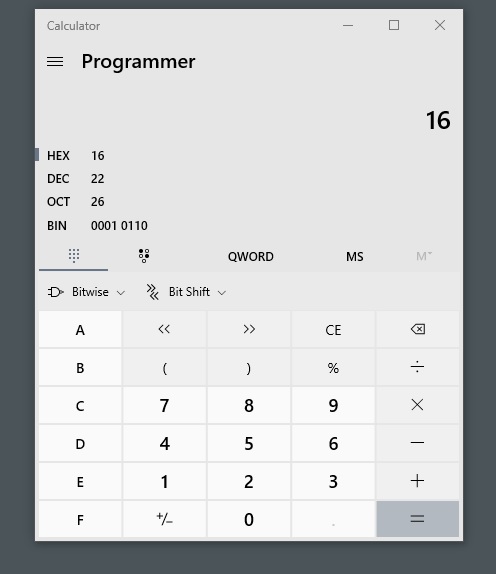 Thanks again, I was thrown by the fact HE was saying CH22 and the XCTU software would say CH16 during it's scans. Just wanted to be 100% sure

Knowing the channel your WIFI devices are using should be on the top of your TO DO list if you are using Zigbee devices. I say this because even a seasoned network veteran as myself I was ready to toss my Zigbee network to the curb until I discovered that my AP had automatically selected WIFI channel 9 and my Zigbee channel was set to default 20. I changed my WIFI channel to 1 and all my Zigbee issues resolved almost instantly. Makes sense because looking at the Zigbee channel chart you can see that Zigbee channel 20 sits smack in the middle of WIFI channel 9.

Lesson learned: Don't forget the basics. Sometimes it's the simple things that get you.

An interesting complication to the Zigbee/WiFi coexistence issue was raised by a Italian university study of WiFi, Zigbee, and Bluetooth performance in real world situations. It found that the assumed 'interference free' Zigbee channels 15, 20, 25 actually suffered much worse error rates if coexisting adjacent to WiFi channels 1, 6, and 11 than the 'interfering' Zigbee channels: for example, observed frame error rates of 89% for Zigbee channel 15 in the presence of WiFi channel 1 (vs. roughly 50% for Zigbee channel 14 in the same scenario). Quoting the article "the spectrum of Wi-Fi devices operating on channel 1 also occupies the 2.425 GHz band employed by ZB15. Such Wi-Fi spectrum is not illegal, since the IEEE 802.11 standard specifies a transmit power reduction of 30 dB for frequencies farther than 11 MHz from the central frequency, and this is indeed achieved. Yet it is not enough from preventing a heavy interference on ZigBee networks. Also note that the spectrum around the 2.425 GHz is the most used coherently with the fact that ZB15 is the most penalized channel."

Similarly Zigbee channels 20 and 25 suffered error rates of 83% and 61% respectively, in the presence of activity on WiFi 6 / WiFi 11 (considerably worse than the 'interfering' Zigbee channels immediately adjacent to 20 and 25).

I suspect this may not be a major concern given that the study examined worst case scenarios (WiFi payloads generating the highest channel occupancy time along with physical proximity WiFi Tx / Zigbee Rx pairing) but it may be worth noting when all else fails.

Sidelobe overlap signal strength drops drastically with distance so unless its right next to it then it wont matter.

Tests in the study were done with devices 9 meters apart, well outside the sidelobe range of concern.

The link you provided is to a different paper from different authors (though also from 2011). Indeed the study you linked reported negligible error rates for Zigbee 15, 20, 25: different methodologies, environments and measurements. I don't know which study is more credible; just pointing out one more thing to consider when things aren't working according to plan.

That's unexpected; higher error rates as you move away from the center frequency of the overlapping channel. As they point, that contradicts other published theoretical predictions that the Zigbee packet error rate would increase for channels closer to the center frequency of the overlapping WiFi channel: "The obtained results contradict the previous result presented in [4], [5], and [6]. The results of those papers were mainly based on simulation and analytical analysis, in which they showed that the PER increased as we got closer to the center frequency of Wi-Fi channel. The articulated assumption in the previous work is that the in-band interference power of Wi-Fi is considered as a band-limited AWGN for ZigBee. This assumption is correct in the case of center channels and fails in the case of edge channels. This is because the interference distribution of the edge channels is totally different than AWGN."

My read on this is that the authors conclude that theoretical assumptions which inaccurately model the WiFi interference signal as Adaptive White Gaussian Noise through the entire band of overlapping Zigbee channels are likely to account for differences in observed vs. predicted Zigbee error rate performance in real world scenarios.