So there was a recent post asking about actionable notifications

I’m looking forward to the Hubitat mobile app and would like to request the ability for customizable, actionable notifications. I’d love for this to also be part of the web dashboard as well if possible. Example Scenario: It’s raining outside, or the Hubitat (or 3rd party) weather app is stating as so. Hubitat weather triggers condition that it’s raining, also realizing that the sprinkler is scheduled to run a few hours later, Hubitat mobile app notifies me that “it may be raining and sprink…

First off I am a HUGE fan of Tasker and the autoapps plugin. The level of automation Tasker allows on android devices is amazing. There are integrations for EventGhost and Node-Red which allow amazing things to happen painlessly and without having to write code. Recently the creator of the autoapps and Join plugins also took over development of tasker which means integration is becoming even more seamless. I have no affiliation with the developer or the apps themselves. I just believe they are useful tools and like to spread the word.

I decided to mess around with a it a little bit today and was quite happy with the results, so I thought I would share. Using a slightly modified version of @stephack's Join api driver I was able to create a nicely formatted notifications with icons and buttons.

I got a 30 day trial of the Join API and like the fact that I can choose my own status bar icons and can have have the notification open a webpage (Cloud dashboard) so I just threw this together. I’m not sure I will switch to this app (another 5 bucks is steep for an icon) but I thought I’d share what I made. If someone is really interested they could easily expand and adapt it to include more functionality. This is based off the Pushover driver that @ogiewon and I built previously. /** * Join…

The amazing Join app found on the Google Play store

Join allows you to easily do stuff remotely on your Android and PC devices like SMS, notifications, clipboard, and much more! As Featured on: ☑ Android Police: In short: this app is powerful http://goo.gl/MbEi96 ☑ Android Headlines: Join clearly has a lot to offer http://goo.gl/Bwvivq ☑ AndroidGuys: Best thing since Pushbullet http://goo.gl/zSYUaj And more!! ☑ 30 day trial - one time $4.99 payment to unlock Try the app for free for a month, then unlock it with a one time payment to continue u...

Tapping the notification anywhere besides on the buttons will open the dashboard I made for my phone.
Tapping the buttons performs the selected actions.

This is a real notification triggered via HSM by a moisture sensor.

First shot: Just showing the Icon in the notification bar.

Second shot: The collapssed view of the notification.

Third shot: Expanded notification with tappable buttons capable of carrying out whatever actions you'd like.

I know it is just a notification, nothing to get too excited about. I was just quite pleased at the results.
If anyone is interested I can provide instructions for doing this.

I know iOS supports actionable notifications as well. Would be nice to have the flexibility.

I setup the pushover driver today as my wife has one of those iphone things. I may spend time tomorrow to see if pushover can create some buttons like this on her phone.

Huh...I didn’t know that. I loved tasker but I just switched back to IOS for {{{reasons}}}. I’m going to check out ios notifications further.

I may spend time tomorrow to see if pushover can create some buttons like this on her phone.

It can but only one button...at least that was the limit when we built the driver. 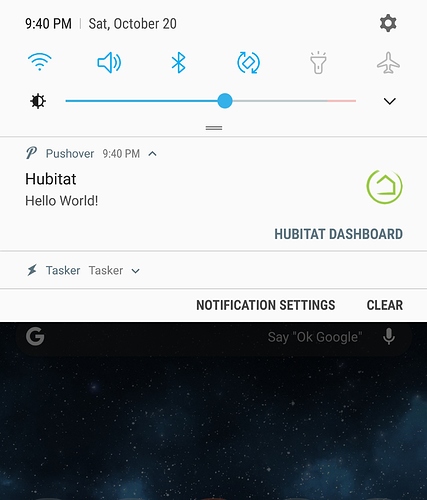 I surprised myself and actually really like the the new phones and the watch. I miss my Note9 pen and Tasker though. Sorry to divert the thread. I will run silent again.

Hate to resurrect an old thread, but is this modified Join API app floating around somewhere? I tried the original and it doesn't seem to import at this point. I'm trying to reproduce the Tasker/Autolocation presence system that was popular in SmartThings, but since SharpTools doesn't work with Hubitat, I'm thinking Join pushes would be the best way to keep tasker notified of the Hubitat state.

We are excited to announce the integration of the SharpTools.io platform with Hubitat Elevation! SharpTools.io includes a web based dashboard and Rule Engine which enables you to visualize, control, and automate your smart home from a 'single pane of glass'. Important : You must upgrade to firmware 1.1.3 or newer on your Hubitat Hub in order to take advantage of this integration. NOTE: Hub update 1.1.3.116 includes an updated version of the SharpTools Hubitat App which should resolve the is…

I believe he's referring to the SharpTools for Android app which provides a set of Tasker plugins including some nice event driven plugins that can trigger actions in Tasker based on events in your (SmartThings) hub.

It's on our list to add support for Hubitat to the SharpTools Tasker plugins, but we've found that most Hubitat users have been getting by with the Hubitat Maker API and using one of the push options.

Note that Join is just one option for pushing messages down to your device. Personally, I use Pushbullet to send messages from Hubitat down to my phones/tablets (via the SharpTools.io Rule Engine), but I understand that Pushover is a popular alternative on the community and even has a native driver built-into the platform.

Pushover has a one-time $5 charge per 'platform' that you use it on. (eg. $5 for Android and $5 for iOS if you use both). To use it, just go to the Devices screen in Hubitat, create a Virtual Device, choose Pushover, fill in the name and ID, and once the device is created be sure to fill in your Pushover API Key in the device preferences.

If you want to use Pushbullet, you can either use the driver by rayzurbock or connect the SharpTools.io Rule Engine to send pushes.

Pushbullet's free tier has a 500 message limit per month.

Erm... I never even knew that was a thing! LOL

I do own Pushover as well and maybe I'll give in and go back to that, but I use Join for enough other things that I would prefer to only have one app on my phone (and I can't imagine it doesn't just work better with Tasker since it the same developer). The worst part about Join is it's terrible name that makes it impossible to search for information about it. The original code for Join linked above doesn't seem to cleanly install anymore, and I wondered if the version cwwilson had modified would.

BTW, regarding the Sharptools Android app - even though I bought one or two of the plugins, I never did much with the app because it didn't seem to support the Family Library. It's not so much that I was opposed to paying for the app a few more times, but that it was just enough of a hassle to convince the other household members to pay for it or to accept money from me to buy a license key that it wasn't worth doing, so I looked for alternate solutions. If there was a better way to handle licensing, that would make me much more likely to buy the Hubitat version if it ever appears.

I use the regular join app. Works perfectly. But if you are trying to send notifications to Tasker, check out AutoRemoteLite. Allows you to send messages to Tasker through simple HTTP calls. The lite (free version) the "commands" are limited to 2 characters. but that gives you 1296 possible commands for free.