Hey, is there an app or virtual device which detects when the Internet connectivity is lost? Not the Wifi signal, that usually never goes out, but my internet does, and I'm trying to trigger a reset through my newly installed Zooz ZEN20! Thanks!

I'm sure it can be done. I'll definitely be following. I feel like you could do this with some kind of web request, but I'm not 100% sure of how to go about that. Should the web request fail, then your trigger happens. there are a few gurus around here that will probably chime in on it.

If you make a web request you normally expect to get a returned result of 200
Something could be created to send a pushover message if the return was 404 or similar.
Probably very doable in a virtual driver

And Andy, that's precisely where I get the Windows Blue Screen of Death in my head. I tried, I really did, and they tricked me with that name too. I thought it was going to be like 1970's kinda fun. But alas, even with a name like Groovy, that part of my brain is much smaller than the others, like airplanes or national intelligence, I can talk about that stuff all day every day, well, the former more so than the latter. However, would you be willing to settle for a crisp virtual high five in exchange for making me a virtual driver?

I can do this in my favorite go to app, Tasker, but that's only because I have every single plugin ever developed for that beautiful beautiful app. I lovvvve me some Tasker, but even with all that love, it still falls short here. It could detect the drop of interwebs and trigger if and when I'm at home, but there would be no way to tell Hubitat.

The only conduit betwixt those two that I know of is SharpTools, and that doesn't play in the local game. Plus I want it to do it autonomously without any required input from me, because I'm lazy.... And entitled... and shouldn't have to get off my Vinci and walk over to the magical world wide web machine and reset it, unless of course I'm provided with a fully charged Segue.

I lovvvve me some Tasker, but even with all that love, it still falls short here. It could detect the drop of interwebs and trigger if and when I'm at home, but there would be no way to tell Hubitat.

Fortunately that is not true. There is a built in app called Maker Api. This let's you expose http endpoints to control devices in Hubitat (both local and through the cloud). You should check it out. It increases the power of both Tasker and HE for your automations. See one of my cloud endpoint below. I use it with Autoloaction to update a virtual presence device in HE. 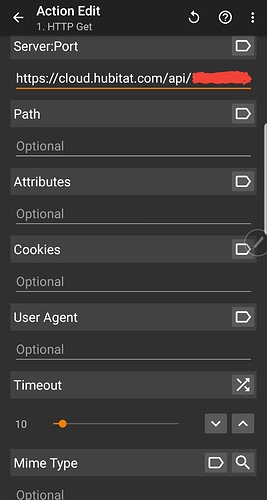 Seriously!!? That's outstanding news! It must go locally via wifi? Hey, I appreciate it!. Time to get my learn on, but not before VIRTUAL HIGH FIVE!!!!!

p. I lovvvve me some Tasker,

I wholeheartedly agree. Here are some of tbe fun things I've done with tasker and various plug-ins.

My widgets for control AND status updates. Originally done with the housepanel API. Now can be done with built in maker API and rule machine.

Hi everyone, I wanted to show my latest project. Utilizing several android apps / plugins / hubitat / HousePanel / rule machine / tasker / apps, I have created a very cool interface for my home automation on android. All the widgets shown are integrated right into the launcher - which is a very nice product all by itself. This is still very much a wip but I wanted to share so here is a small video. The app I used to record seems to have muddied thigns up a bit. Still lots of formatting to fix…

So there was a recent post asking about actionable notifications First off I am a HUGE fan of Tasker and the autoapps plugin. The level of automation Tasker allows on android devices is amazing. There are integrations for EventGhost and Node-Red which allow amazing things to happen painlessly and without having to write code. Recently the creator of the autoapps and Join plugins also took over development of tasker which means integration is becoming even more seamless. I have no affiliation …

And also can send texts through the join API. (I belive hubitat still has a ten per day limit)

Can't say enough great things about the hubitat tasker ease of use together.

It was funny, I installed and deleted Tasker no fewer than three separate times one 2 or 3 years, completely frustrated, not able to I stand who would make such an initiative app. I thick I treat some blogger who said something about it that rescenated with me, basically explaining that they're are a few people, mostly heavy coders who can pick up Tasker cold and start leveraging it within a few minutes or hours,and that the rest of us needed to be patient and allow ourselves copious amounts of time (a year or more) to really start flowing with it. So I downloaded it again, and did what I always do, just purchased all the plugins straight up front so I would not have the option of not spending the 99¢ later. I had Join and Sharptools for about 6-9 months, not a clue as to what they did, and had Join set up to the point where it was always scareing the hell of of me with text notifications on the computer which I didn't know where they were coming from. I'm good now love the whole thing, going to ruin it like a US Army chicken position. One never even considers it finished because it can always be improved upon.