First of all my apologies of a rather lengthy message but I needed to provide the full picture because some things are working and others are not.

Also, thanks in advance for all your help!

I am transitioning off of Wink. So far, I have been loving the move. The level of control that the Rule Machine provides is currently unparalleled, and support in this community is second to none.

First, I moved 40+ Lights (all Lutron) and Ecobees. No issues! The next big planned move was Shades, which besides lights, is the primary use case that we have for automation. Things started becoming rough, when it came to shades. I moved first half of my shades w/o any big issue (at least exclusion from Wink and inclusion in HE was easy).

The following are mainly our objectives for Shades (a point to note is that all of these use cases were working in Wink).

Issue with UC3: Haven't really figured a way how to group shades together because groups don't allow shade devices. Looking for tips/suggestions on how work group of shades with Alexa.

I think you could be getting the popcorn effect in your blinds. Look up @Cobra 's apps. He might have one to help with this issue. BUT ...
Get that wink hub turned off. Then repair your network. They run on the same frequency for zwave because zwave has it's own frequency. No channels. So .. yah .. move the rest of your stuff. Then get that hub turned off just to eliminate the possibility of that possibly being the possible issue.

Then you can assess your mesh correctly. Repeaters are good if you don't have a lot of zwave devices. The HE mesh likes a robust network, so .. yah ... that wink hub. OFF

You didn't show us the rules that are running the blinds. Or logs of what happens while you are operating the blinds. Are you using a button or just time of day to determine when the blinds should do something?

@yashvind
Is there a status on this?

I am going to give everything a try tomorrow. Essentially, now the plan is to move everything off of Wink & decommission that Hub. Still have 25+ Devices on there, so I will need some dedicated time tomorrow. Will report back once done.

@april.brandt @neonturbo
I moved everything from Wink to HE yesterday and unplugged Wink. And then repaired the network. At the night time, when one rule for Use case 2 ran (taking shades from 50 % to 'closed' position), the issue continued i.e. that shades didn't close. A point to note though is that, the network was still repairing. I had then manually struggle to get the blinds to closed position.

This morning rule for UC1 ran (see at 7:30am in the attached logs), and it seem to have worked as intended i.e. from closed position, it had opened the blinds to 52% position as intended. It was joyous moment indeed when I came down & saw it. I then tried to test to see if I tried to trigger rule tied to UC3 manually, if the blinds will close down (see logs around 8:24am), alas it didn't. The blinds came down a few position notches haphazardly and then stalled w/o closing it what the UC2 rule should have done. I then ran the rule for UC1, that did take the blinds back to position 52% as intended. It did dance a few times and shades didn't again work in unison but were randomly operating and took about 2-3 mins to fully go thru the monition to finally getting to position 52%. In comparison, none of this happened in Wink.

Here is link to the rules in play here.

I appreciate all your help here. In addition to above issues, can you also please suggest best way to group these shades to fulfill UC 3 & UC4.

I'm not sure why this is happening now. Definitely an issue for sure. Maybe something with the driver? If you trigger them individually do they do as they are told? If you set only one blind.
Tagging @bcopeland for some insight.

I duplicated both rules and then limited to just one shade. The rule 1 to open the blind to 52% worked, but when triggered the rule 2 (to close the shade from partially open position of 52% to close, it moved like 10 points and then stopped). Then triggered the rule 2 to open it to 52%, which again worked ok. So it seems it's having a problem in closing from partially open position to fully closed.

What driver are you using? Native or community driver? 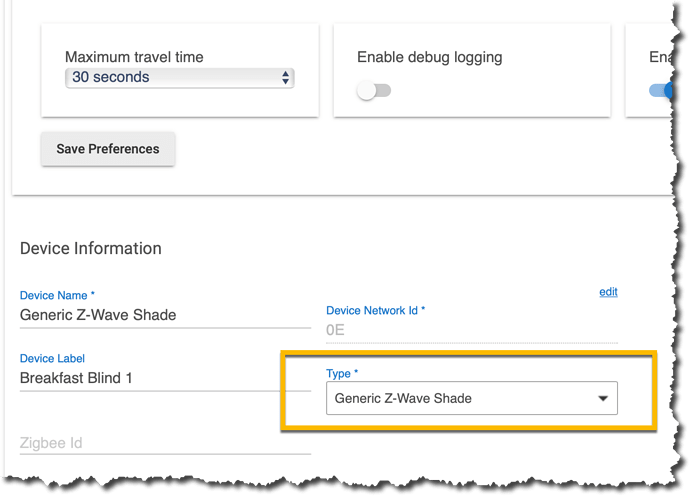 I must add though that I have another shade in my office - same brand, same motor, same driver, same everything. This was the the very first shade I configured. This office shade too is configured in a similar way (see the rule screenshot below), i.e. it closes the shade from 52% open position to fully closed and works just fine. The only difference I can think of is that, for that shade I manually turn on the power supply just before triggering the shade itself. Not sure if that somehow forces commands to process thru completely than stalling in the case of that shade.

Morning rule that moves the office shade to 52% 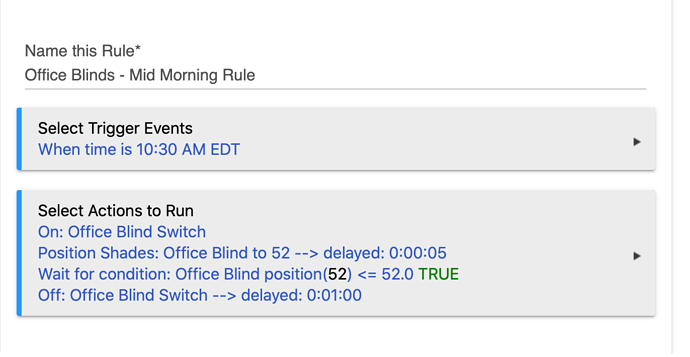 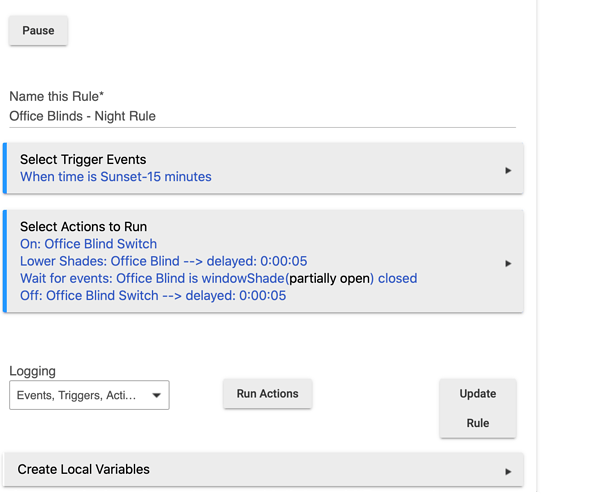 You telling me that makes me suspect some interference in your mesh? Do you have many z-wave devices? I can't remember what you said. I'm particularly interested in the powered devices. Are these blinds z-wave or z-wave plus? Turning on the power source would trigger the blind to communicate with your hub. What is the brand name of the shades?

All the shades are powered. These blinds are almost 3+ years, so I think these would be z-wave (and not plus).

Do these use zwave to radio hub?

No, it has direct integration with Z-Wave hub. Here are the instructions from the manual. This is what I had to used to integrate with Wink Hub 2 and now also with HE. 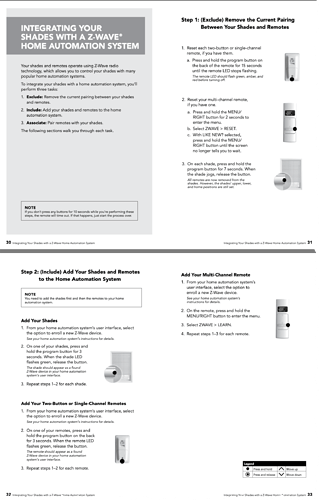 It say's 'No intermediate positioning' (at least for Wink), but it worked flawlessly for 3+ years with me on Wink. And also, in HE2, my office blind works just fine with intermediate. 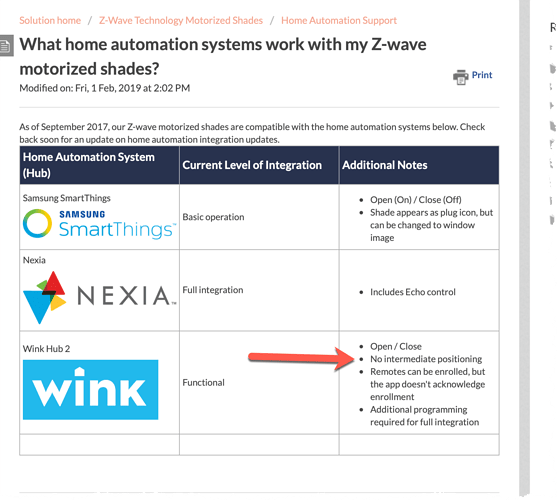 I suspect this might be a FLiRS device, but I can't find anything on the protocol. Wink supports beaming within the hub natively. HE needs repeaters to do this. I find in Z-Wave Alliance These results, which I'm not finding what I'm looking for. I'm unsure if ST and Wink programmed specifically for these blinds? Which wold explain why the worked, but seems unlikely.
Here is what I suggest because you have what you need to do it. I know that wink supports beaming natively, so I would find the instructions to change your wink hub into a repeater. If that works, then it would just be poor communication to the blinds and you can find something else to repeat with beaming down the road when wink cuts off the hubs. The cost is your time. But, would help to determine if it's a mesh issue. I suspect it is because I can't imagine that these blinds wouldn't be FLiRS protocol.
I think this is the link to the instructions.

I've checked the forums here and online and I want to leave some information here for people in my very specific situation. I just moved from Wink to Hubitat. However, I quickly found that the Z-wave radio on the Hubitat is far inferior to that of the Wink Hub 2. One solution would be to simply get a micro-usb OTG cable and get a Z-wave stick and call it a day. Instead, I thought, why not make use of the superior Z-wave radios on the hub that I already have? Luckily, there is a way to do ju…

I am actually going to give away my Wink to someone. Also, they will start charging monthly subscription soon, so I might as well spend money on something else than them.

So if I understand it correctly, if this is a distance issue, how about I move my hub with in 15-20 feet of these blinds?

Try it. Don't forget to run a repair after you move it.
Can't hurt to try.