This thread has been created to combine/update the information about this device/driver. As well as provide detailed documentation on how to deploy it. This driver is maintained by @codahq, with support/documentation by yours truly. It is a fairly complex driver. Please read this carefully. If you have questions, or updated data, please post.

MUST READ - If you read nothing else, please read this section

All capabilities can be reported in total, as well as for each clamp separately.

Reporting Groups are the sets of information you would like sent to the hub at a given interval.

Instead if you want a state reported for separate clamps, select them all in the same Reporting Group. To combine all similar state options in one Reporting Group by holding the CTRL key for Windows (Command key for Mac), and selecting each one. Unfortunately, since Hubitat doesn't support multi-select preferences in drivers you will have to select your Reporting Groups EVERY time you save preferences.

To get started we recommend choosing....

Correct selection example - Will show state for all the given selections, both Clamps 1 - 2, and total independently. (state HEM selection not displayed, but selected above)

Once Cost, and Reporting Group selections have been made, click Save Preferences to apply.

Hubitat doesn't support multi-select preferences in devices. There is nothing we can do about this. We need the HE devs to fix this. They sort of work but the limitations are:

Reporting Group Error - some combinations don't save correctly and kVarh (an unimplemented report) is defaulted to the report groups instead. It is not known, why or what combinations will result in this error. However we have found that if see "kVarh" in the Reporting Group list, that is most likely a bad combo. Please post bad combos, so we can create a list here.

Devices with firmware 1.35 do not adhere to Selective Reporting settings properly.

@mick.baker @LosinIt If I finish/validate the 3 clamp code and then send you guys a copy would you be willing to try it out? (if you buy one LosinIt)

I'd love to but the 3-clamp model is useless here in the US, as far as I can tell.

Misunderstood. Thought you were over the pond as well.

@codahq I have some time at the monent to test your changes for POWER 3 if you have managed to code anything yet... Otherwise this driver works very well. Keep up the good work.

Is there a way to add Battery Reports on this driver, getting this warning using this driver every min: 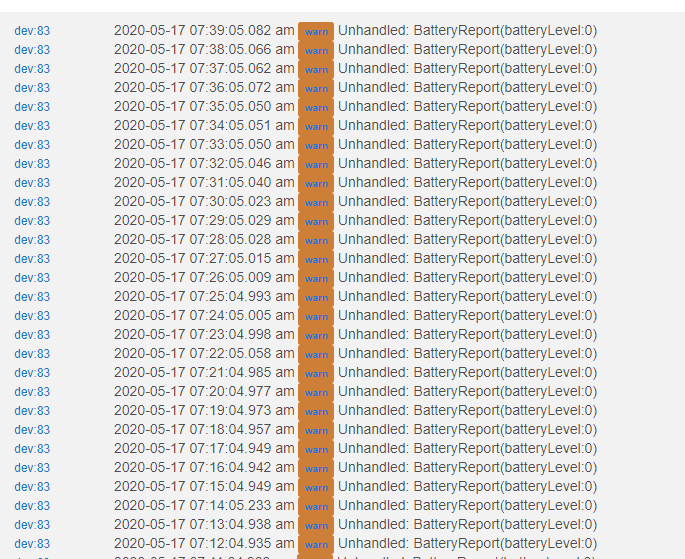 On mine, I don't use the battery at all but the real driver had an option to either have Battery or power via AC power I remembered.

Are you using the model number listed? Don't recall mine having a battery (kinda wish it did). I just checked and my hub does do not give that warning. If it is different let us know, so we can add it to a list that works with the driver.

Either way I'll ping @codahq to see if it can be added either way.

Now that I'm looking, the fingerprint doesn't match exactly so it must not be the exact same. It does have ZW095 labeled on it, maybe I have an older revision/version than what you have. I do know it works for me though other than the warning for the battery that I posted although I don't use the 3rd clamp for the Clamp 2 readings.

On mine, I don't use the battery at all but the real driver had an option to either have Battery or power via AC power I remembered.

Does that mean you have a G1? The Gen 5 isn't battery powerable. What is the fingerprint?

I'm trying to set an alert on power usage in RULE but I don't seem to be able to pick the POWER 1/2/3 attributes only the sum of all 3. Is this something that can be fixed?

Can you get what you want if you don't use power and instead use "Custom Attribute"? The OOB power capability only allows for one power attribute. If you can't get what you want I have considered adding composite devices to have parity with the some of the OOB drivers that have power metering. I would make it an optional preference though. I hate when devices unnecessarily create child devices.

Anyway, in this scenario there would be a child device for each clamp and then you could use the power capability selector on the child devices. I could be convinced to do that if you can't get what you need by using Custom Attribute.

Yes... your right using Custom works. Is your explanation also why I can't select POWER 1/2/3 in the InFLUXDB and HubConnect applications? If so then that's a big shame.

Yes, but doesn't the HubConnect application support custom attributes in some other way?

Indeed it does but needs some one to code the driver. Alas I'm not there myself but I dream one day i will be able to contribute more.

That's reason enough for me to add the child device functionally. I'll post here when the change is pushed.

Clamp 3 support and child component device support is posted. If you want clamp 3 support there is one line of code at the top of the file that you change from:

I didn't want everybody (e.g. me aka the important one) to have to see the clamp 3 options so I hid them behind that variable.

I also captured that battery report even though this really isn't the correct driver for that device. There is no derivative of the Gen 5 that supports battery. There might be one of the G2 but I always thought it was just G1 that supported battery.

Aeotec either had a really bad counterfeiting problem or production or refurbishing issues where a lot of G1 and G2 devices were mislabeled. I have a G2 that is mislabeled as a Gen 5. It even had Gen 5 packaging. There are a myriad of other accounts floating around of devices that appear to be one device that are actually a different device under the plastic case. Who knows what happened.

Either way, the label on the outside of the device is probably not trustworthy in some situations. I would recommend asking the device what it is. The firmware has a harder time lying.

This device isn't powered by batteries.. it's directly powered by the mains!
How can I test the child component changes you have made? I've had a look around and it all seems to be more or less the same as before.

Use the new preference, Luke. 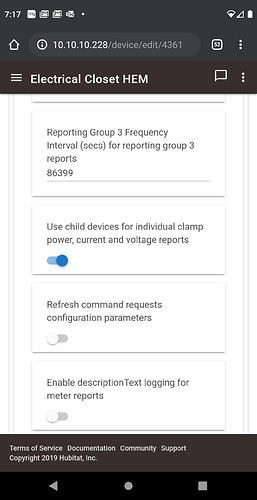 Love your sense of humour. I can report that it's now working in HubConnect and InfluxDB. Outstanding... Take the rest of the day off...