TL/DR: I'm really just wondering if there is a different motion detector I could use that would detect body heat, and avoid all the wind-induced motion? (Zigbee preferred, Hubitat supported)

This is the view out my front door showing the covered entryway. You can see the Iris v2 motion sensor on the wall to the left. There is also another Iris and a PEQ Motion sensor above the front door. There are two lights in the ceiling of the entryway controlled by a Inovelli Red Dimmer. 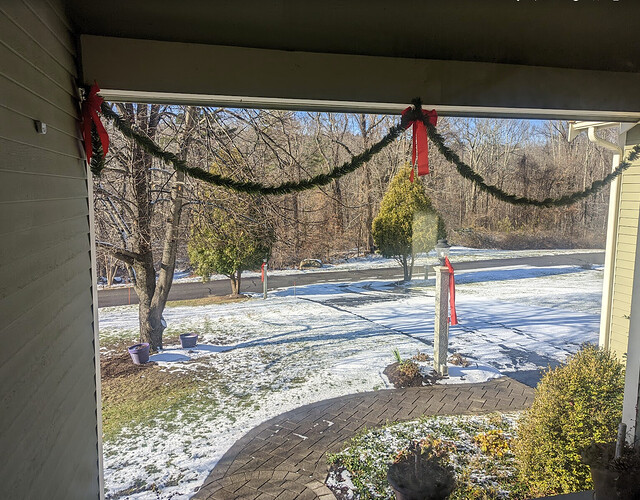 This has worked for a long time with a Motion Lighting instance to turn on the entryway lights when detect motion outside, or when the front door is opened.

I recently added two Gardenspots (aka Smart+ Outdoor Accent RGB Lighting kit) hiding at the edge of inside walkway arc. I've got them set to show alternating red/green lights for the holidays, but they switch to white when there is motion or the door is opened.

Then my wife put up the ribbon on the lamp post and the garland. And it's been windy. And the motion sensors are being triggered all the time.

That's when I added the 3 outside motion sensors to a Zone Motion controller. It helped cut down on false positives most of the time, but today it's really windy and the left wall motion sensor is detecting motion constantly. You can see this in the chart from Activity Viewer :

The Zone Motion Controller helps. I have it set at False Motion Reduction with 2 of the 3 need to be active within 20 seconds for it to trigger.

But, this was a lucky instance. I set up an Alexa Routine to announce when there was motion detected outside when none of the doors was open (the "Front Porch Motion While Door Closed" and "Front Door or Garage is Open" virtual devices are part of that detection). But even with the Motion Zone, I was getting false positives for motion at least twice a day, so I turned it off. (my wife already said she was ignoring it)

I'm considering adding another motion sensor on the right side wall, and including it in the Motion Zone, but I think it will just detect wind motion from the garland. I suppose that problem will just go away in January when we take it down after the holidays.

I'm really just wondering if there is a different motion detector I could use that would detect body heat, and avoid all the wind-induced motion? (Zigbee preferred, Hubitat supported)

It’s probably meant to be used with a security system that has a proprietary wireless signal, but in the datasheet, it looks like it has a wired output too.

Could be $$$$. But there should be other sensors out there that combine PIR and microwave, maybe there’s a deal available on eBay.

Perhaps I could recommend the Homeseer Floodlight Sensor HS-FLS100-G2 as it has always received stellar reviews for its PIR reliability, especially for the price.

I use Blue Iris on my own server for my outdoor cameras. BI also has AI motion sensing built into it so I can have it send a command to hubitat to turn lights on and off. The AI can tell the difference between a car, a house, and an animal. You can program it when to fire and my false alerts are now at zero.zero. Just a thought.

I meant to specifically ask: Aqara has a "Human Motion Sensor". Is this just a PIR like every other or is there something special about it?

Perhaps I could recommend the Homeseer Floodlight Sensor HS-FLS100-G2

Those entryway ceiling lights are just in 6" cans; no fixture under there to attach that to.

Never tried the AI side of it. Hmm. I currently use multiple sensors to reduce false positives, specifically because I found external motion sensing via BI a bit pointless to be honest.

Worth another look it seems.

Detecting body heat in the cold when the person is insulted from the cold is an issue. You’re probably best to look at AI person detection as suggested. Also having Hubitat (or any hub) support will be difficult.

Have you considered a non-tech solution like using something to secure the ribbon to the post so it can't flap in the wind? Secure it halfway down and also at the bottom of the ribbon. I did something similar for a large ribbon decoration my Mom put on her house - she just didn't want it flapping around crazily in the wind, no automation issues.

I used small hooks like below - and then used some fine wire that wasn't visible a few feet away to loop around the hooks/ribbon. Sorry, no pics, this was last year and she's not using that this year. The ribbon still hung down naturally but was restrained from flying all over the place in the wind.

something to secure the ribbon to the post so it can't flap in the wind?

It's the hanging garland that is moving in the wind... and my wife considers that a feature. She also likes the ribbon moving. No, replacing the wife is not an option.

I use Blue Iris on my own server for my outdoor cameras.

This is intriguing. It does not seem like something I'll have setup in a few days, however. AI software looks like the right approachm but I don't have outdoor cameras either- yet . What type of cameras do you have? It would be difficult for me to mount powered ones without involving an electrician.

POE cameras, just run cat-5 to them. I am using Dahua Starlights which have a very good image. They can see stars in the night sky.

I share @waffles idea. Using a camera allows much more accuracy. I have seen cameras that do facial recognition (even with masks on!) and can be controlled by zone within the image (so you can mask detection (you draw a grey area on the spots like plants that move in the wind) so they don't cause false positives.
Dahua cams are exceptional and priced great. I will mention I don't buy any cams in the USA, the US doesn't have a cam manufacturer. They are all OEMs - (GEEZ! @waffles posted as I was typing!)

You may also like to consider Camect. I’ve been using it for about 6 months now and it’s been nearly flawless with my Dahua NVR/cams.

For those not in the know, Camect is an Indiegogo NVR that is local - so it keeps all your camera content local - even cloud ones like Wyze. The best part is that it's AI-based, so you don't get false alerts - like ever. I had all kinds of PIR motion detectors tied into my home automation system to try and rule out false positives with my Hikvision cameras, but this takes it to a new level. While the content stays local, it's also accessible via webRTC, thus, you can get to it off-network. It …

Might be easier than setting up a Blue Iris system.

If you are primarily interested in people entering the entryway then you could install a break beam detector across the entrance ?

Just as an aside could a PIR sensor be mounted inside but above the garlands pointing inwards ? PIR's are not best when walking directly towards or away from the sensor but it may work.

Have you tried using the Deepstack AI integration with Blue Iris? I found it works near flawlessly. Here's the tutorial I followed to get set up - Blue Iris + Deepstack BUILT IN! Full Walk Through - Go from beginner to expert in one video. - YouTube

The iris V2 sensor are great, but they are sooooo sensitive. I find the iris v3's to be a little better for outdoors. The Hue outdoor sensors are expensive, but very good, and have adjustable sensitivity. The Homeseer floodlight sensors, mentioned above, work well also.

my hue outdoor motion/multi doesnt fire with anyone other than the dog or people. wind does not set it off. but it is under a slight roof over the front door in both houses so that may be why? it is zigbee and i have it paired direct to hubitat not to the hue hub.. they are pricy though.

This one? Motion Sensor US | Philips Hue