How to use Room Lights for Groups

There seems to be a fair amount of confusion about how to set up a group in Room Lights.

Before getting to that, let's define what a 'group' is:

There is one option we may want under Means to Activate. After opening the Means to Activate page, open the sub-page for Activation Lights Options. The option is "Activate as Group with ON Command" under Additional Options: 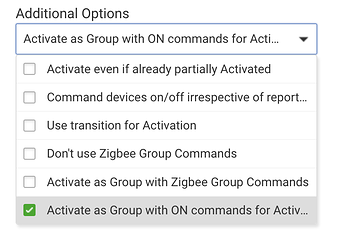 If your group consists of nothing but switches it would be sort of obvious that turning the Activator on would turn all of them on (in which case this option is irrelevant). But if your group has bulbs that are CT or color bulbs, then turning them "on" actually means restoring them to the state they were in before they were turned off. So conceivably, they could each be in some different state, different levels, different colors etc. had they been individually controlled some other way.

So we have two choices in this situation as to what happens when we turn ON the Activation device. We can just send ON to all of them and take what we get. Or, we can activate them according to the Device Table on the main page. This option determines which to do. When selected as shown, Room Lights will just send an ON command to them. If not selected, then the table is used. This is the only circumstance in which the Device Table has any effect on how the lights in a group are activated.

That's it, that's all there is to creating a group with Room Lights.

Thank you for providing more info about that option, Bruce -- just earlier today, I was wondering about it as I was reviewing some of my RL settings. I didn't recall seeing it when I set up my RL stuff during the beta, so it caught my eye - this is helpful info.

Lol, I've been setting all the bulbs to switches to get that simple on/off command, I'll have to try this tomorrow.

Thanks, Bruce - this was most helpful!

Above there is a discussion about the option concerning how ON to the Activator Device is handled.

With groups, using other Means to Activate effectively turns them into a Scene when so activated, where the Device table defines what happens upon activation. For a group, only the Activator Device can activate them as a group per se (see definition in first post above).

This is what I have been saying and asking and no one confirmed. So again I ask, the only way to use a group of lights always as a group of light and utilise ZigBee groups for example is to create two instances of the app? One with the original devices and the activation device and another with the activation device as it's control device then other means to activate.

I label my RL instances as "Group - xyz..." if I'm turning everything off or doing nothing but checking if anything's on... I use the all-off variety to turn off chunks of the house when away or at night. 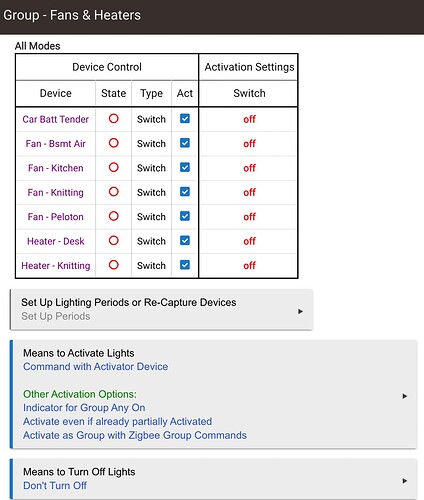 I use the anything-on version to make a dashboard tile for quick at-a-glance info if garage lights are on, for example. 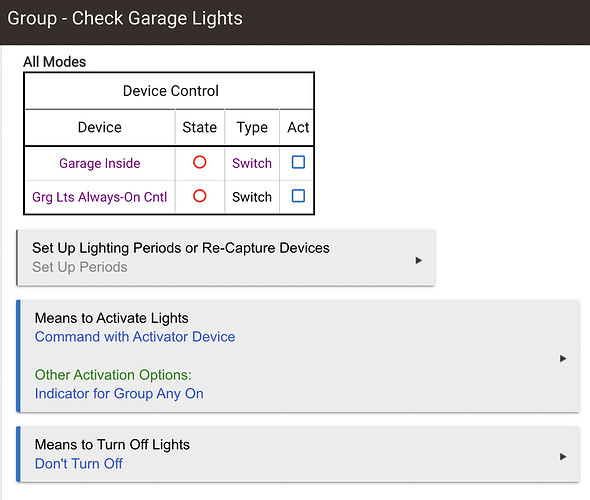 I label my RL instances as "Scene - abc..." if everything is getting turned on - in those cases, there's always at least one dimmer involved somewhere, so variances in the Level/Temp parts of the table's "Activation Settings" area come into play. In most of these scene cases, I don't ever actively turn the scene off. 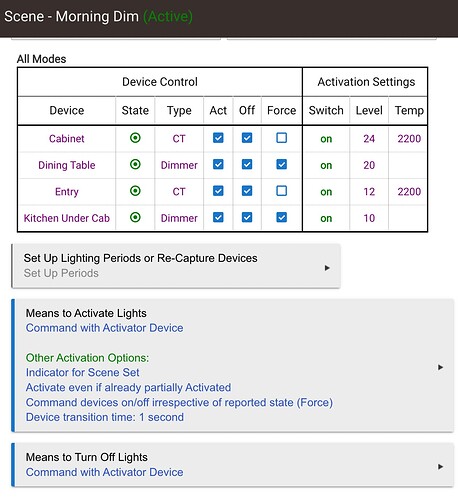 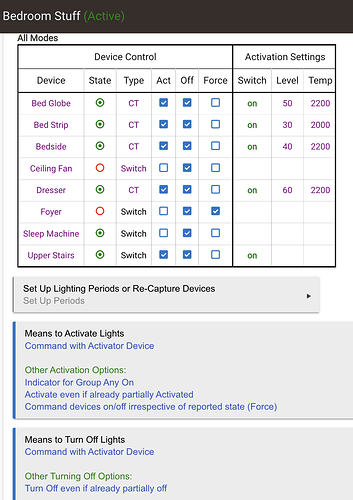 In all these cases, my Activator Devices' Device-Type is "Room Lights Activator Switch" -- that choice just made the most sense to me, and seems to be working fine so far.

So for Groups, I'd like to have them simply turn on and off with out changing the state of the bulbs. So when I turn on a Group of bulbs they use the same setting they have when they were turned off. I thought that was what was being described here but it's not working. When I turn on the light in my study, using the activator device, it always uses the settings in the table, regardless of the state the bulbs were in when I turn them off. The only way I've found to use Room Lights to work the way I want is to change the bulbs from CT to Switches. The setting in the screenshot aren't working they way I was expecting, maybe I misunderstood the opening statements here. 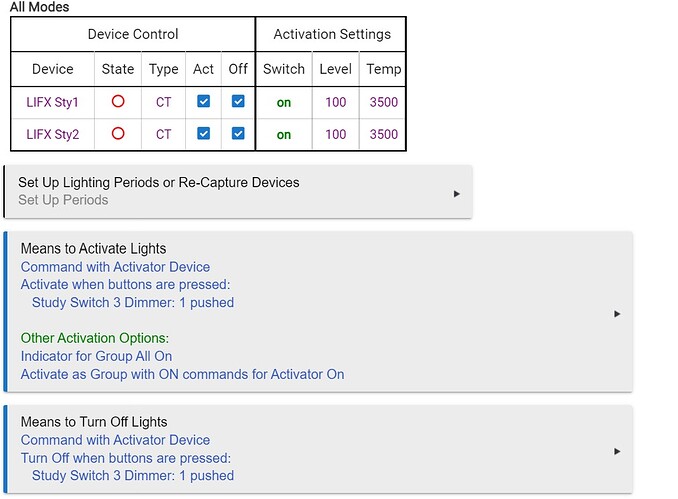 When I turn on the light in my study, using the activator device, it always uses the settings in the table, regardless of the state the bulbs were in when I turn them off.

Please show the logs for this. If that option Activate as Group with ON is selected, then it should only send an ON command to the devices.

When you say "activator device", that does not include the button being pressed. Group activation can only occur using the Activator Device being turned on.

I see. When you said "activator device" I assumed you meant anything in the Means to Activate section. So I removed the button and created an entry in the Button Controllers, pointing it to the virtual "activator device", this works as I was hoping. Now when I turn on the lights using the button, it just uses the previous settings. I'm assuming this is the same with motion based activation, I'd need a separate Room Lighting entry for motion that references the "activator device"?

One thing that's still tripping me up in all this are the (device) Type options for the Activator Device... Why are there so many options and how do they really differ if the main point of the Activator Device is just to send an "activate" (for lack of a better term) command to the grouping such that the grouping does whatever the table tells it to -- on, off, set levels, colors, or any combo of these things. 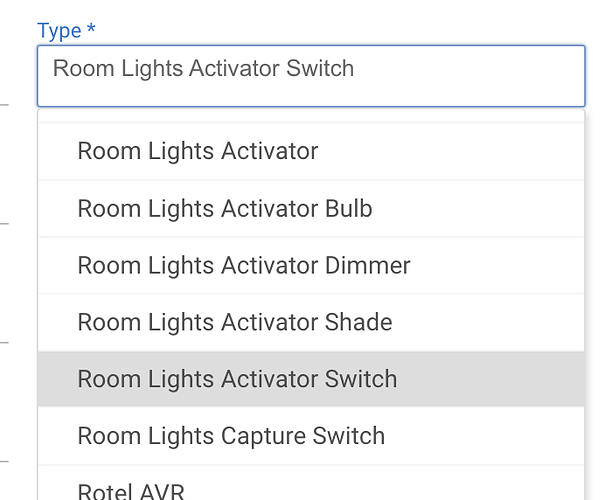 In that sense, the Activator Device seems more like a button than anything else but I'm clearly misunderstanding an important concept here... TIA for any assist to get my head screwed on right.

if the main point of the Activator Device is just to send an "activate" (for lack of a better term) command to the grouping such that the grouping does whatever the table tells it to -- on, off, set levels, colors, or any combo of these things.

For a group activating doesn't use the table (see first post), it does whatever the Activator Device does. If you wanted to control color or CT bulbs as a group, you'd need the Room Lights Activator Bulb, etc.

Ok, that particular nugget helps a lot - thanks. I am using "Room Lights Activator Switch" for everything so far, and that's working fine for my stuff (most of which is scenes / my groups are all just plain basic on or off calls-to-action).

I think I'm tracking all this better -- it's sinking in slowly but surely -- thank you again!

I think I'm getting it. In Room Lighting, you create an "app", which has a table containing a group of devices to control. You can also set up parameters to be used in a scene for those devices, on/off, dimming, color, etc. But the Group/Scene difference doesn't happen here. It's a Group or a Scene depending only on how you control the devices in the table.

If you enable "Activate as Group with ON Command", then all commands sent to the Activator act on the table devices as a group - they'll all turn off/on (with their previous settings), or if you tell the Activator to set a dim level, all devices with that capability will dim to that level, etc. You're controlling them all as a group, in the same way. The settings in the table are not used.

If you disable "Activate as Group with ON Command", the only change is that on/off in the Activator will cause the devices to be set independently, according to the scene settings in the table.

But, wait, there may be a better way. Leave "Activate as Group with ON Command" enabled, and create a Virtual Button. Then set the "app" to also use that as a Means to Activate. Now, you can control the devices as a group by telling the Activator what to do, or you can push the virtual button to activate the scene defined in the table (because only the Activator can control the devices as a group).

I'm sure @bravenel will jump in here if any of that is wrong, but if not, it's much easier to understand (at least for me) and more concise than anything else I've seen.

As far as the different Activator types, I don't see any purpose. The "Room Lights Activator" covers all bases. The other ones only restrict available options, which do no harm by simply being present. If you're controlling a set of switches, you're not going to be able to send a color command, but changing that parameter isn't going to cause any harm, either.

which do no harm by simply being present.

Until someone thinks they will do something, but their devices can't do that. And then they wonder why it won't work.

I know.you can do groups in the new app but the mindset used to be use the simpler app if it works for performance and hub load reasons

I am pretty sure the new room lighting based on its complexity has a much larger footprint than the older group app?. Ie use simple automation instead of rule machine if you can?

Comments? Has this changed?

I can't see someone who can figure out how to combine devices, activators and Room Lighting apps thinking their basic switch should be able to change color temperature.

thinking their basic switch should be able to change color temperature.

You'd be amazed at what people think and do. If the Activator Device has a setColor command, then why doesn't it work??? Seriously, go figure.

Incidentally, Group-2.1 had this same approach, choosing an appropriate specific driver for the group based on group capabilities.

Lol a few of mine do. I wrote a custom driver for a switch that controls multiple lights that passes through color.changes.