New couch and loveseat led to a new entertainment center (okay there wasn't a old one), these have set the esthetic for the room. The thermostat was replaced with an ecobee3, which with IFTTT and LIfe360 gave me true Home, Away behavior based on ground truth in lieu of a schedule. This was all followed by a Hunter Ceiling Fan (pull chains only) wired to the old dual rotary switches in the wall.

Decided I wanted smart control over that fan.

After trading messages with @mike.maxwell, I decided to use Lutron Pico's to maintain and enhance the rooms esthetic. A Hubitat Elevation (HE) should arrive soon.

An overzealous late night purchase resulting in a Lutron switch and wall plate, I suspect I'll never use now. While, lighting seems to be straight forward enough, ceiling fans appear to be another issue entirely.

There is plenty of space under the fans cowl as it's a Hunter Stanley Park 52" close mount. The wall switches occupy a single gang box.

The gang box is planned to be covered by one Lutron Pico with another next to it (mounted directly to the wall) to provide WAF. The light (dimmable) could be controlled simply by a Lutron Caseta.

What should be used to control the fan speed? 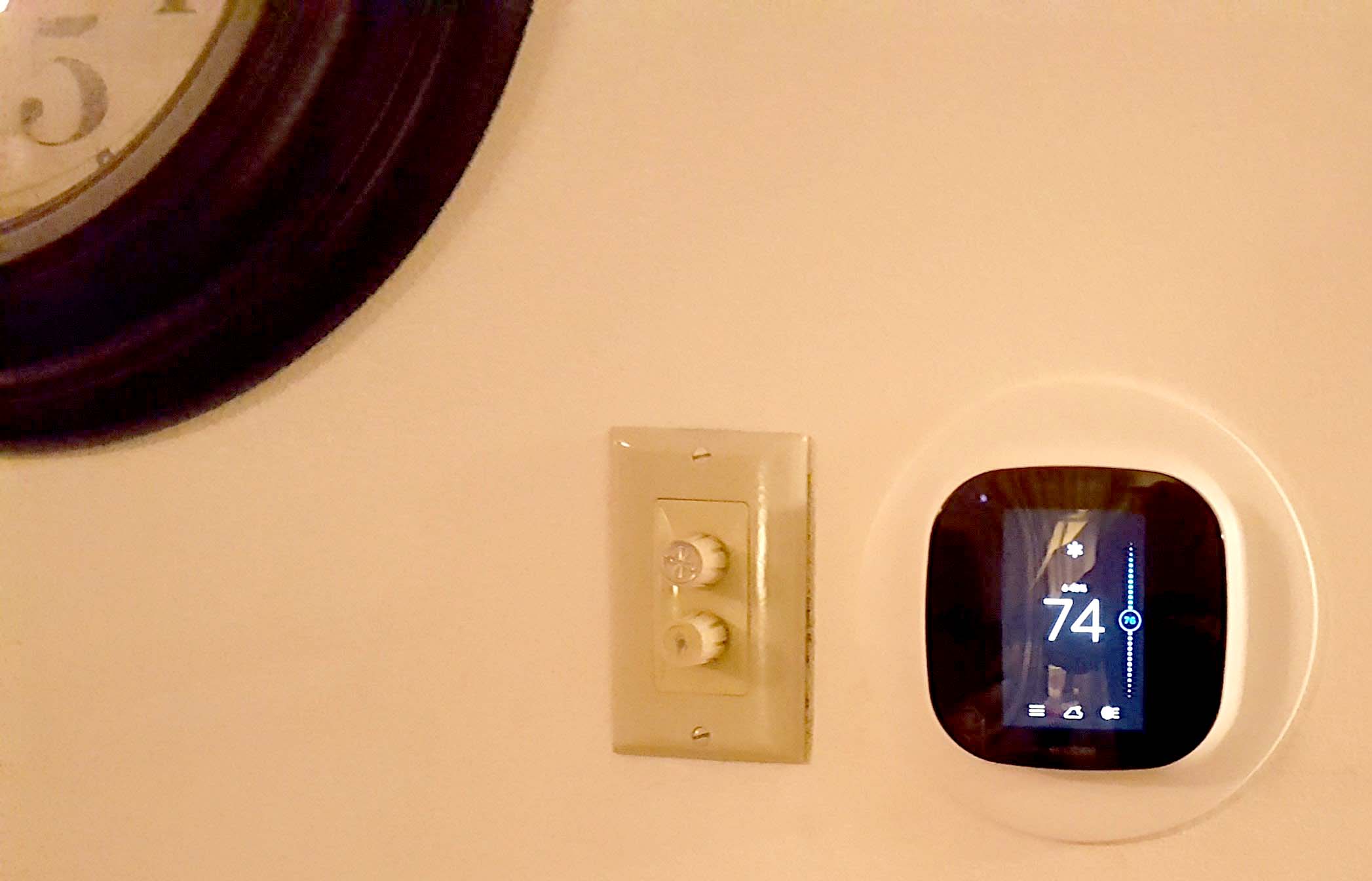 Original dual rotary switch. Pull chains on fan were set on high and tucked up inside the fan. Switch contacts were failing, time for an upgrade. 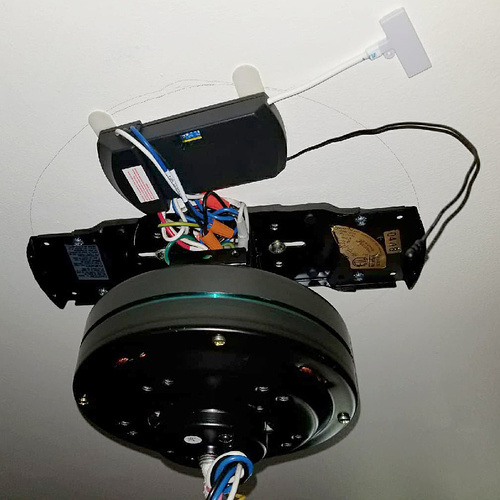 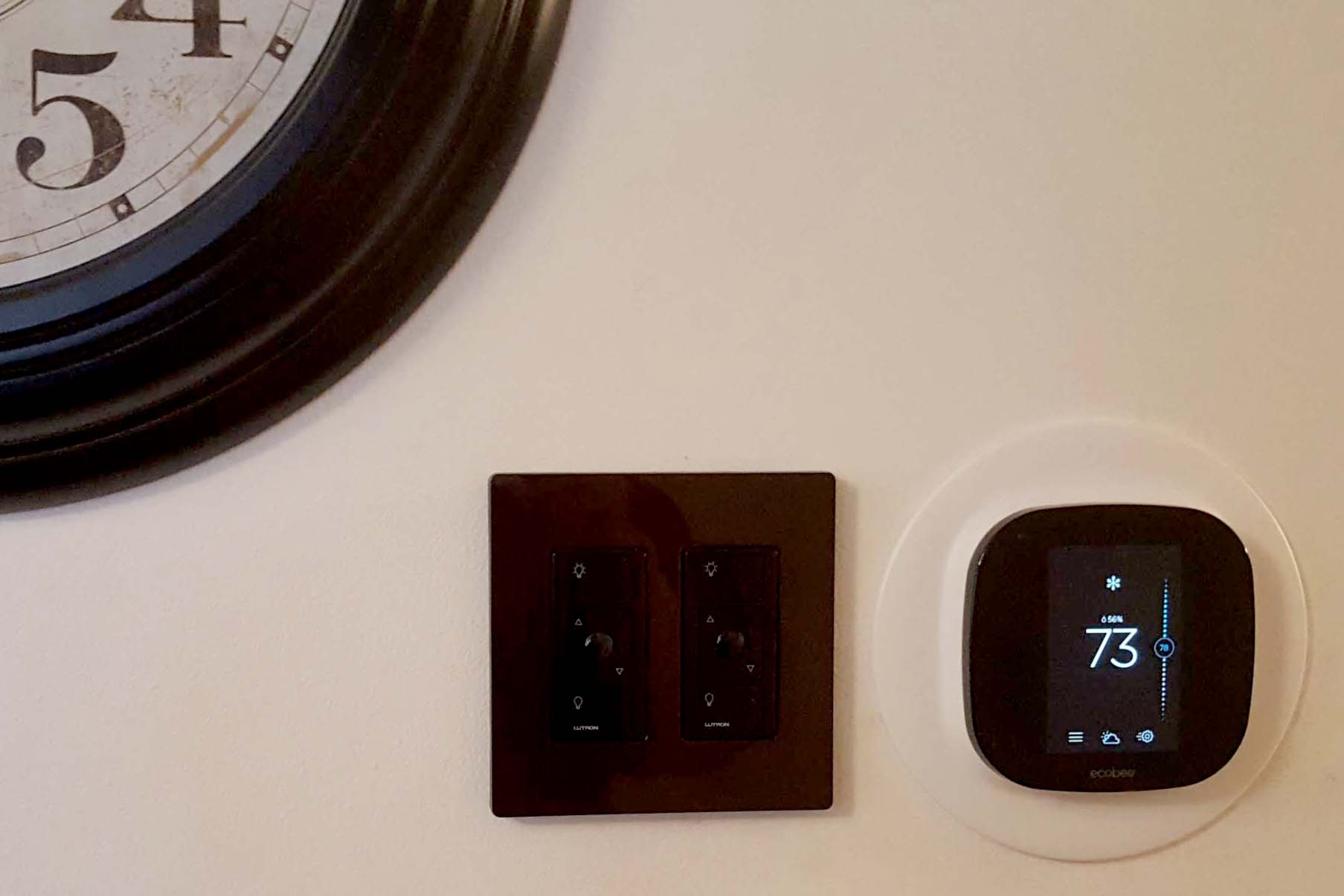 2 black picos with a brown wall plate. Left controls the light and right the fan.

I just installed this Zigbee fan controller and I am using a Pico remote to control it. Works well.

I am using this Driver with it...

UPDATE 6/02: v1.0.20180602 of Fan Controller driver added "cycle" command to cycle through fan speeds (like the remote) UPDATE 5/30: v1.0.20180530 of Fan Controller driver fixes lastRunningSpeed script so that is does not get set to 0 if off() command sent while fan is already off. Now that Hubitat supports Component Devices, I have updated the Hampton Bay Zigbee Controller Driver to more closely match its ST counterpart. There are a few minor differences because of the way HE presents t…

And this button controller app...

Since the Hampton Bay Universal Ceiling Fan Remote Control is a Zigbee device, it communicates directly with the HE, correct?

Which Pico remote(s) are you using?

I bought my Lutron Pro2 Bridge from
(note: it must be a Pro Bridge which supports Telnet communications)

along with some 5 button pico remotes

and some wall mount brackets

Yes, the Hampton Bay Universal Ceiling Fan Remote Control is a zigbee device that pairs directly with the Hubitat hub. Make sure you have a mains-powered zigbee repeater in the same room as the range on on the Hampton Bay device isn't that great.

The included remote control that comes with the unit does NOT operate via zigbee. It uses a proprietary radio frequency for direct communications with the fan controller (notice there are two antennas on this specific model of the Hampton Bay Fan Controller.)

Okay, installed the controller a couple weeks ago, luckily there was some slack above the ceiling making it pretty simply to wire everything up. The fan worked with the remote right away and after a bit of searching, I did a factory reset on the controller and it paired with me HE. Even created a simply dashboard to control the light and fan. Using the remote caused the settings in HE and the dashboard to update.

Since then we've had two power outages, after the first one, I was able to use the wall switch to factory reset the controller and all was well again.

After the second outage, I wasn't able to successfully factory reset the controller. I've replace the ancient rotary switch with a toggle switch to make it easier to do a reset. When the power is on, the fan responds normally to the remote control. Multiple attempt to do a factory reset (off for 3 seconds, on for 3 seconds, repeat 5 times). The fan has been set to low and the lights to max and then everything is turned off via the remote before starting the reset process.

Scott, I would move this post to either the device handler thread or the First Impressions thread for more suggestions Don’t give up on resetting. For some reason some reset easier than others, try not waiting 3 secs but only 1 sec between when...

Tried 1 second and 5 seconds with no success.

This is a great device, I have 4 of them. BUT they are extremely picky about power outages. And can be a pain to reset-pair. I power blips all the time at my house to the point that I have a battery backup plugged into every outlet.

The secret to getting this device to work reliably and connect back up after a power outage is placing a zigbee repeater in the same room as the fan. I can literally unplug the repeater and the fan stops working, even though the zigbee logging page tells me the fan is connecting directly to the hub and not routing through a repeater.

I have an Iris 3210L plug-in outlet in each room I have this fan controller. I haven’t had a single problem since I did that, and moved them from ST. Our master driver maker magic @mike.maxwell wrote a pretty nice driver for it, and it will support component devices in our next major release.

I read about the Hampton Bay Controller (HBC) needing a mains powered Zigbee repeater in the same room. At the moment, the HBC is only only Zigbee/Z-Wave device I have and the Hubitat Elevation is in the same room, maybe 9' away.

I have three of these Hampton bay fans, the radios in them are crap, as @coreylista mentioned they like having a repeater. The factory reset process is a pain, and if they have already been reset, they do not blink after being reset again. Once they have a happy parent as a repeater they do work well, though they do not recover well from any changes in network topology.

I had it in the same room as my hub for a while as well, but it still worked better (with a power outage) when I had a repeater. It barely worked at all on ST even with a repeater.

The updated driver in the next release should help with power outages as well.

@coreylista & @mike.maxwell, it really helps if I have the Hubitat Elevation in pairing mode before attempting to re-pair the Hampton Bay Controller. With the HE in pairing move a'la Devices -> Discover Devices and running through the factory reset on the Controller all is well again. Thanks for the follow-ups

, sorry for the trouble.

Just need to figure out what I'm gonna do with the GE ZigBee White Remote Control, I just picked up.

@MikeH, you are correct having the HE in pairing mode helps. I get frequent power outages and brown outs in Florida and have to reconnect these fans regularly.

I realized that you do not need to reset the fan most of the time. I turn off the fan power at the switch, put the hub in discovery mode, wait about 10 seconds and turn the fan power back on. It usually reconnects on its own within 15 seconds (the light even blink as though they were reset).

This works for me at least 90% of the time. I have 3 of these fan modules and since using this method, I've had to use the reset process only once.

I put the GE ZigBee White Remote Control online in the same room as the HE and Fan. Behind the Pico on the right, I taped and recessed a toggle switch to make resets easier. I had to factory reset earlier today (no idea why), after putting the HE in pairing mode after 2-3 cycles of the uncovered toggle switch light blinked and the fan turned on low. Everything worked as expected after the reset, although initial actions with the Picos were delayed. 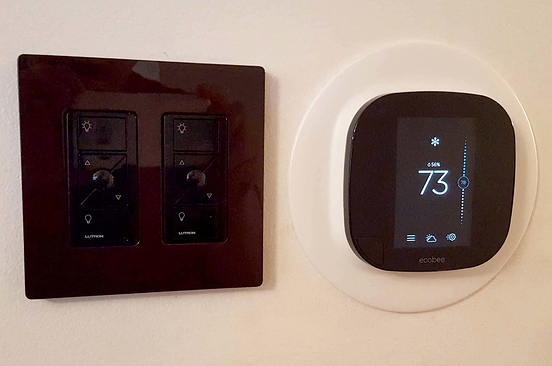 Are these Hampton Bay Ceiling Fan Controllers worth the pain of factory resets? I didn't realize they were so temperamental about power outages. Is this factory reset something that needs doing often?

A factory reset works but is usually not necessary after power outages. I put the hub in discovery mode and flip the power switch off for 5-10 seconds. It reconnects fine for me.

If you are experiencing problems with connectivity when there are no power outages, you will need a zigbee repeater in the same room.

Thanks for clarifying. I don't have one, but I've watched your work with them on the side lines from ST to HE. At some point I'll have an Xbee up and running. Then I'll look at what I'll need to do the get one here in Toronto. HD here doesn't seem to sell the Zigbee versions, but if you ask at the Pro desk, they can sometimes contact their vendors and order-in what you're looking for.

I'm fairly certain most if not all of my power outage related issues, were due to my not setting the Hub to Discover Devices. With the Hub properly set, the Controller reconnects in one or two power cycles as @stephack reported. I've also added a repeater and things have improved significantly.

I'm considering resetting my Hub to factory to rebuilding everything to ensure I haven't introduced any issues due to the number of additions/deletions I've made.

Are these Hampton Bay Ceiling Fan Controllers worth the pain of factory resets?

We’ve recently had a number of storms pass through which resulted in a number of power outages, some in rapid succession. Through all of that no resets of the fan controller were necessary.

Ever since I installed a mains powered repeater above the fan (we have a split front back house) I’ve had no problems with the fan. Certainly worth the initial hassle.

If you invest in a peanut wall plug the Hampton Bay modules are very resilient. We just had four power outages from severe thunderstorms (thanks NOAA weather app for my notifications...shameless plug) and all my fans came back online after HE healed the Zigbee mesh. Some were instant while others took about 2-5 minutes.

For resetting the device you just need to do the following:

I have had little to no luck with other Zigbee repeaters providing the same results. The above is 99% accurate and reliable.

Glad you guys found a solution. I’ve gone with the Caséta Fan controller, which wasn’t even an option when I first posted that question. Really happy with it as well, and I know I’ll never have to deal with a lost connection to the bridge.