[Deprecated] Wake Me Up

Introducing 'Wake Me Up - BETA'
A better way to wake up. With slowly rising light levels, random announcements and more.

This app has been merged into Event Engine - Automate your world with easy to use Cogs. Rev up complex automations with just a few clicks!

Apps can be found on my GitHub or by using the Hubitat Package Manager.
(HPM is highly recommended) 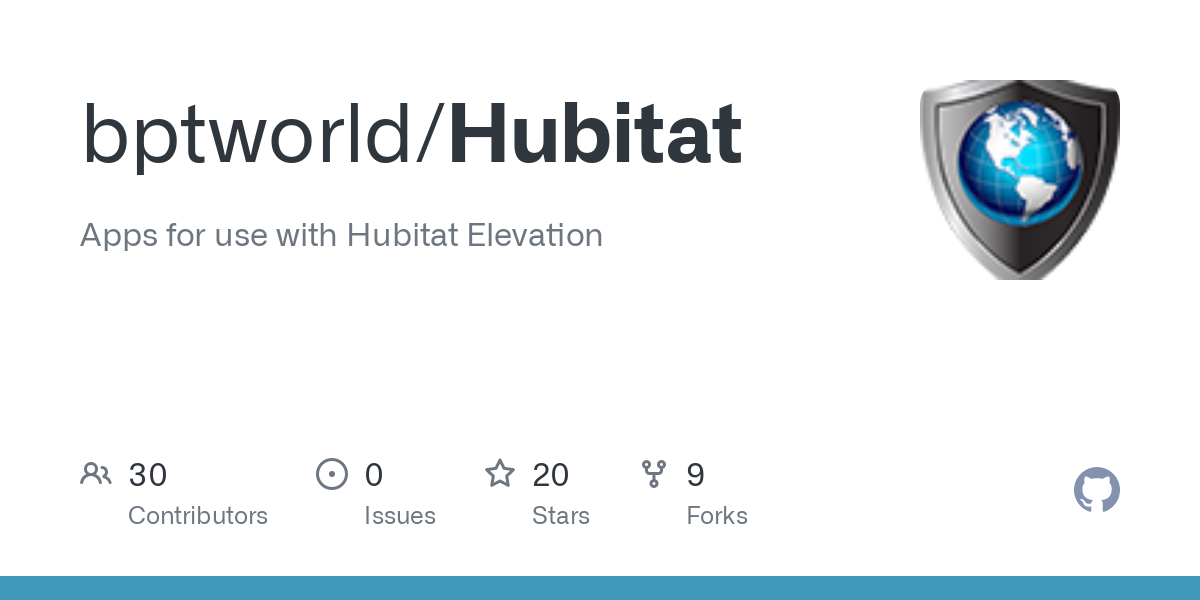 GitHub - bptworld/Hubitat: Apps for use with Hubitat Elevation

Apps for use with Hubitat Elevation. Contribute to bptworld/Hubitat development by creating an account on GitHub.

Before You Go Go. 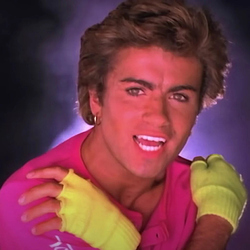 Before You Go Go.

Hey, you do what I do after a stroke! The right words = hard

Thanks for putting this together @bptworld. I'll just throw in feedback/comments as I come across them here.

can both be on at the same time 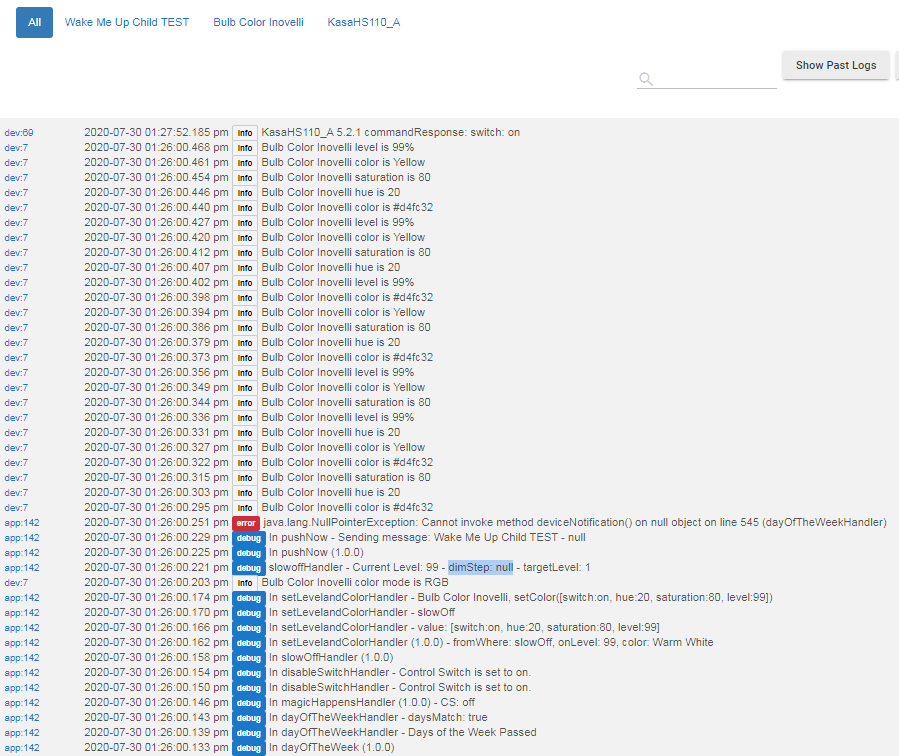 What alarm are we talking about and why is it required?

UPDATE: So it appears when the time event triggers it will only run if the control switch is on... Is that right? I can see that being useful for some people, but why is it required? 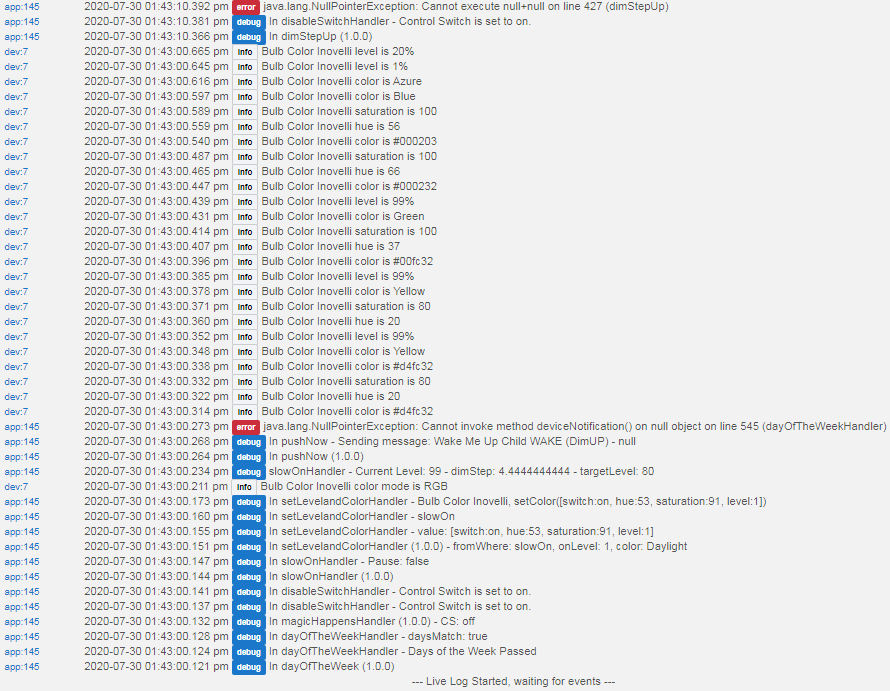 Had an issue with push.

I can see that being useful for some people, but why is it required ?

I added wording to the app...
"Alarm Switch is required anytime speech and/or push are involved. This is how you will stop the alarm from either going off or from the repeating aspect from continuing. Just like a regular alarm clock, except this one can be controlled with voice assistants, dashboards, etc.!"

Updated and push now works. The cycle completes(I set time to only 1min) but from the beginning to the end my bulb is low brightness(which I would expect going from 1->80) and pale blue. It stays this way and never changes color or brightness even though the logs show changes. Hmm.. Note that the color is set to 'Daylight - Energize'. 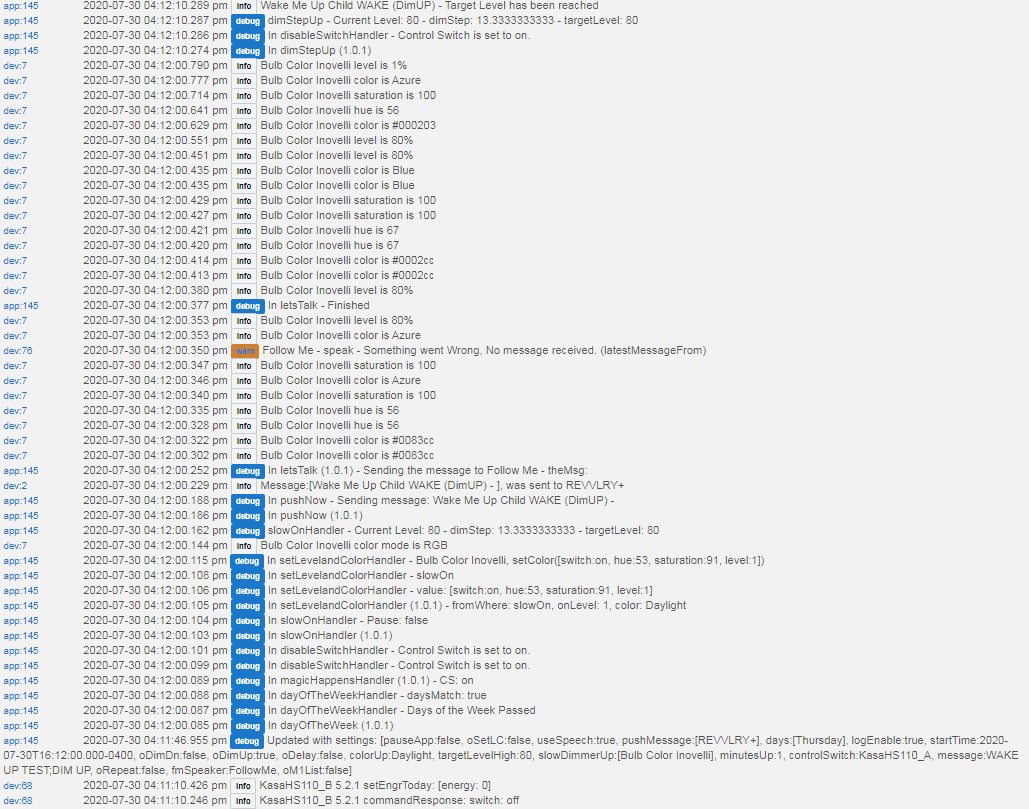 UPDATE: I did some more testing and found the following:

Bryan, maybe I am misunderstanding how to use this. Maybe I just need to be pointed to the right settings?

I first tried to use "Slowly Dim Up" option by itself. I selected the bulb, time, color, and target level. The automation ran, and it worked fine with one exception. The bulb came on to its previous set level and then your app took over from there. I was expecting that the bulb would start at 0% or 1% and dim up to the desired 99%. Instead it started at 40% (the previous set level) and went to 99%. I don't see a start level.

So for my next run through, I tried "Turn Light On, Set Level and Color" option in conjunction with the previous settings. I set ON level to 5%, using the same bulb as the previous try (same bulb was selected for both this and Dim Up). This time the bulb didn't come on, and it said in the logs "Wake Me Up Child - Target Level has been reached".

So how can I have a bulb come on at a set level, and go up from there?

My other question is about cancelling an in-progress automation, in particular the dim up function. In Gentle Wake Up it gave an option to cancel the remaining timer if you turned the bulb off. The way the pause function in this app reads, it is not a one time thing, it permanently disables this app if you toggle that function (and of course press the selected button).

This is a great start by the way, it already works better than GWU.

I'll take a look at it tomorrow.

Alright, I found some time...

I first tried to use "Slowly Dim Up" option by itself. I selected the bulb, time, color, and target level. The automation ran, and it worked fine with one exception.

same bulb was selected for both this and Dim Up)

I've added some wording to NOT do this, lol.

So how can I have a bulb come on at a set level,

These are set, I may make this user selectable in the future.

I'll have to think about that one.

This is a great start by the way, it already works better than GWU.

That's IT for tonight! lol

I will give it a try when I have a chance (probably tomorrow) and let you know how it works.

Thanks for looking into it!

Actually had a minute before I went to bed, so tried a quick run through. Got an error, and the bulb stopped raising level.