Wasn't expecting this from Zooz, but I'm eager to read real-world reviews soon -- especially for PEX under one or both legs.

It's certainly an intriguing design!

Smarter Flood Prevention PRODUCT HIGHLIGHTS   Beta release:   you may need to update the firmware in the near future to get full functionality of your device; the device may not be fully compatible with your hub at the time...

I saw them post that in their last e-mail, and I was initially skeptical about the design, but having watched the video, I'm reasonably impressed.

My instinct says that using this with Pex under one or both legs would be a bad idea, as I don't think it's rigid enough to handle the torque of the motor on the valve -- but like you, I'm interested in seeing what the reality is.

I really like that it can be operated without being on the Z-wave network.

Are these only available in the USA yet? I don't see anywhere to buy them in Canada.
Much the same as the 700 series toggle switch, still not available in Canada

The ZAC36 is an interesting design, but I am not sure I would be comfortable using it. I do have a Z-wave valve actuator on my water inlet valve, but it functions by turning the existing valve handle. If the actuator should fail (during a power failure, for example), I can still operate the valve manually using the valve handle. Since it looks like the Zooz design requires removal of the original handle, manual operation would require finding a wrench of suitable size. If you do decide to go with the ZAC36, I would suggest you obtain a suitable wrench and have it located nearby.

Did you watch the installation video? You do not remove the existing valve handle...

Thanks for posting this, @hydro311

Correct as noted, the existing valve is not removed.

It does look like you'd have to remove the Titan device to manually shut off the valve if there was a loss of power to the Titan, or if it just wasn't working and you needed to turn off the water. Shouldn't take more than a minute or so to take it off, so doesn't seem like a huge concern IMHO. Maybe you can open/close the valve when the Titan is attached but I didn't see that discussed on the product page.

I can see this filling a niche for folks want this control and don't want the hassle/cost of paying for a plumber or doing the plumbing themselves to install an in-line controller.

I do wish the attachment to the pipe included a strap that went around the pipe, but maybe that's just my belt-and-suspenders voice talking in my head.

I have one supposed to arrive tomorrow. I will report back once it is installed. I do have all copper pipes so I wont be able to help you on the PEX question though.

Awesome - look forward to your thoughts!

Interesting, this looks like a zwave version of the Elexa Guardian WiFi water valve.

The autonomous Leak Prevention System that automatically closes your water main during leaks and notifies you during emergies.

on the PEX question though.

Seems that would be where the calibrations importance comes in. In theory if you can close the value easily with one hand without stabilizing the PEX tube with the other, the unit should be able to do the same. That said you may need to stabilize the PEX at the valve, if it is not ready done. To hold the weight of the unit if nothing else.

Since it's working with a 12V supply, this is great for people that have 12V battery backup sump pump systems (like me), you could just run wires from the sump battery to power the valve at all times especially with the wired sensor and if you have a battery backup on your hub also.

Although having a battery backup is a great idea, I am not certain that running it off your sump pump backup battery is ideal unless your leak sensor is located in a spot such that insures the water valve is closed before your sump pump drains the battery.

Although having a battery backup is a great idea, I am not certain that running it off your sump pump backup battery is ideal unless your leak sensor is located in a spot such that insures the water valve is closed before your sump pump drains the battery.

I actually have a nice bank of batteries giving me about 100AH of usable battery and the pump is actually a boat bilge pump rated at 1500 GH. It would need to be pumping non stop for about 24 hours until the battery reaches 50% of it's capacity (which is where you don't want to go under with lead acid). So I would not be worried.

This would most likely be the best option especially if the valve is far away from the other battery source. But then again, you will need to have some sort of battery charger on this battery also, so the cost does go up a bit.

But now this raises another point/question that @agnes.zooz might be able to get us the answer, can the Zooz Titan operate without a problem with a 12V up to 13.8V voltage source (12V lead acid batterie with a charger on it) or will this be a problem.

I received and installed this on my copper pipes. Installation was very easy. It paired with my hub on the first try. Unfortunately I don't think the device is yet supported by Hubitat as the device screen buttons do not in any way reflect a shutoff valve. No Open or Close. See image. Anyone know if this is true or how to get this to integrate.
Thanks

That is the generic "Device" driver, which means Hubitat could not find an appropriate driver on pairing. My guess is that one might be coming in 2.2.9 (it is for other Zooz devices released around this time, and Zooz claims it is compatible, which usually means they've worked with staff), but I haven't heard confirmation.

In the meantime, it's likely that the "Generic Z-Wave Valve" would get you pretty close, albeit without whatever configuration parameters the device might support.

Thanks. Making the device a Generic Zwave Valve gave me some control so that is good news. It seems open is close and close is open. Will need to wait for the real driver. Thanks for your reply.

Ha, sounds like the Zen17 when it first released - open/closed was reversed for contact sensors on it. A firmware fix corrected it pretty quickly, so I expect Zooz will move pretty fast on f/w updates now that this device is out in the wild. Thanks for your initial report here

This valve is working great on my 1" PEX water main.

It shows reversed close/open for me in Hubitat with the generic valve drivers. It also does not expose the built in water sensor yet. Looking forward to the official drivers. Here's a picture and a short video of it in action after triggering the built-in water sensor with some water. 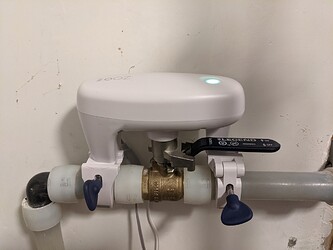 It is a little tricky to get it to open again once it triggers... I had to dry it very thoroughly and blow air through the sensor. I am currently unable to use it with the hubitat safety monitor app using the other new zooz z-wave leak sensors I got, because the safety monitor can only close valves in response to leaks, not open them.

I have it plugged into the UPS for my instant water heater for some power failure protection.

Finally got mine installed in a horizontal position. I actually have two main shut off valves, one before and one after the meter. Put it on the lower one so I have more reach for the leak sensor, although looks like it could be extended with a 3.5mm jack extension. Power cord was just long enough to get up to the ceiling and over to the outlet for the water softener.

Calibration Note - Maybe it is just me but the paper instructions confused me a little. I was thinking OK I need to hold this button for a while and then at some point two beeps will go and it will calibrate. Not the case, I held it way too long then realized what was going on and it made some angry beeps and flashed a red light at me. When you hold your finger on the button it will beep/chirp about every second and you need to RELEASE the button right after two chirps (not one and not three) to get it to calibrate. Maybe I should have watched the video but, call me old school, I would rather read the instructions on paper.

Inclusion - I opted to try the Smart Start. I waited until after I calibrated it then scanned the smart start. I then power cycled it which seems to have forced it to pair up and it joined without any issues.

Driver - Mine paired with some heat-it temp sensor driver, and it was getting temp reports so this things must have a temp sensor in it (bonus). The "Generic Z-Wave Valve" was not working at all for me. The commands did not do anything and nothing in the logs. I did however discover the "Generic Z-Wave Plus Switch" driver works great for turning the valve on and off, On is ON and Off is OFF.

Plan to start tinkering with a custom driver for it to see what capabilities can be unlocked. Not sure what the timeline is for 2.2.9, or what functionality the driver will include?

I will get some pictures attached to here later.