For this particular rule (it looks like a simple automation rule, but correct me if that's wrong), the suspect is having both atTime and sunrise entries. I was able to recreate same settings on a test setup, but won't know if it fails until tomorrow. If you don't want to wait, just recreate the rule and we'll know if it works about the same time 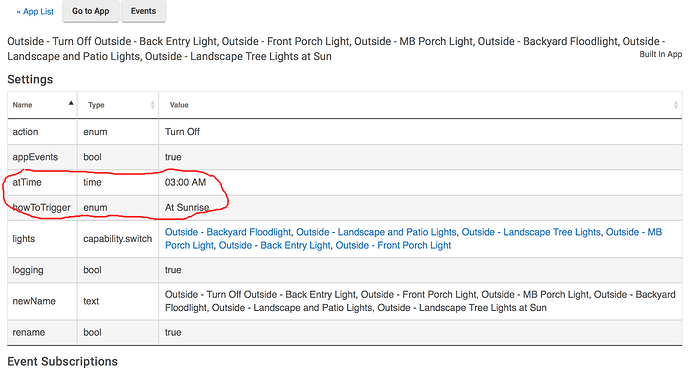 Yes, that is a a simple automation rule, but I noticed I have Rule Machine triggers failing too.
Is that something that I set for both of those to be on like that?

Mine does not go back that far either.

Yeah, it's a on/off switch for simple automation rule...

...and a multiple select dropdown for rule machine 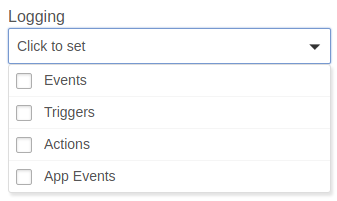 Thank you! I turned this on for the few rules I know that are failing.

If it goes back this far. Mine only goes back to mid-August, so maybe theirs will?

I just looked, I didn't think about the data base culling shrinking the history here too. Last time I actually looked at mine, it went back to April when I turned on my hub for the first time. It's not that way now....

I have it turned on almost all the rules, definitely on for the ones I shared the examples for. Take a look at the Screenshot that I had shared in my message (Shades - Downstairs Blinds....), you will Events are being logged but last logged event from that rule is 07/20

What’s interesting is that both of us have the event logs pointing to July 20th as the last activity date for respective rules. If the firmware upgrade was the root cause, what are the chances that we both upgraded on the same date - 19th or 20th itself and just us having broken rules!!

I also have a odd Mode manager issue going on. One of my modes doesn’t change all of sudden (I have a post going on for it as well). Are you seeing any issues with modes?

My rule ran at sunrise despite having both settings, so the issue is elsewhere. I'll keep digging.

One of the rules that was misfiring for me was in 'simple automation' with a -ve offset, so glad to know RCA is and a fix on it's way. Thanks for your work on this.

What about 'Motion Lighting App' & 'RM' rules. Any insight why some of those may not be working and why events are not being logged despite the logging to be enabled?

I am also seeing odd behavior in the mode manager, could that be related with the same issue?

I'll look into those today.

My rules don't have the offset but still have problems.

So far, the rules that don't work consistently, work when logging is turned on. Something about forcing them to make a log entry is causing them to work correctly.

I found another issue with another rule, that is selectively firing for some devices and not for others.

I have a rule that turns off everything on our upper floor in the morning. Started noticing that some fans are not turning off (all controlled by GE Smart Fan switches). Here are my settings: 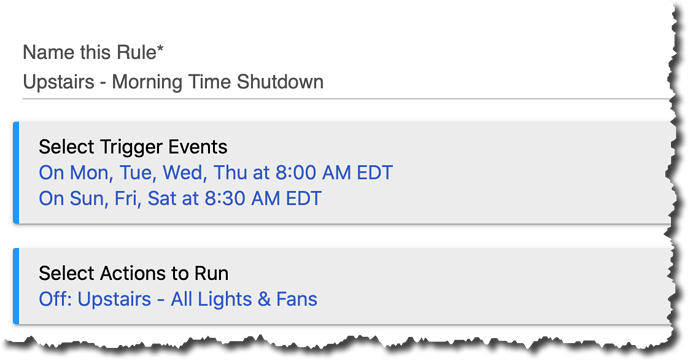 Rule has been firing consistently

But this device no longer getting controlled since 09/11

Here is another example of another fan that stopped getting events in Aug.

But then here is one of Lutron lights, which is part of the same rule & group, and works just fine. For example the rule turned this light off at 8am, as intended.

So I wonder if one of the firmware updates, broke something with these GE Switches in this case?

I think I am seeing the same time. As I go thru settings of these devices & test then, I am also manually triggering these. And that seem to jump start them and again start getting triggered by rule(s). I have to test more to confirm that it is a confirm behavior though.

Another issue that I discovered is that none of my fan controls are working via rules. I can still control them directly from their respective device page but they don't get triggered via rules anymore. Looks like switch status polling is also not work (for example, if I turn the switch on manually, the device in habitat is not seeing its state change). These are GE Smart Fan controls. Very frustrating, it all used to work until sometime ago.

@gopher.ny did you get a chance to look into these issues? TIA

I think this may be related to hub's time jumps. If at some point the hub thinks it is 2036, it will schedule the next rule trigger into 2036. A save causes it to recalculate next trigger time using current (correct) time.
Now that there's a clear problem definition, I just need to come up with a solution...

I noticed after the update the other day the time and date had jumped ahead several years and months. The current time read 02-08-2036. I noticed the change later and changed it back. But since then several of my simple rules no longer work. Nothing in the log about them even attempting to execute when I put logging on. Anyone else ever dealt with a time jump ahead? I worked in development at a large software company with an email package. When this happened, no mail that was created durin…

Never put your hub in the DeLorean.