I have seen a number of threads about Tuya integrations and some about Tasmota, but nothing that clarifies the state of Tuya / Smartlife Wi-Fi devices with HE.

Tuya is a very large and growing ecosystem, its Wi-Fi devices integrate locally with HA, but there seem to be no working solution for HE without flashing the devices with a new firmware.

Am I missing something? Can we expect a Tuya integration in the future?

There's nothing official at the moment and no announcements I've seen that would suggest upcoming official support (not that they usually announce this kind of thing ahead of time regardless). Like you, I've seen only the community solutions, and to get this to work locally, I believe you have to flash the firmware to something Tasmota or something else that works locally.

FWIW, I believe it is the same with Home Assistant. The actual Tuya integration I see, Tuya - Home Assistant, says it works via cloud polling--not locally. The Tasmota integration works locally, like it can with Hubitat (it's just a community integration over here, which I suppose basically everything is on Home Assistant except that this one is included with the platform

Thanks for your reply!

First, I believe that there is a HA local integration without flashing Tasmota. See here.

Second, and I may be missing something, do we have anything equivalent to the cloud-based integration that HA offers?

I believe that there is a HA local integration without flashing Tasmota. See here.

Ah, so that's a custom component (not one included with Home Assistant) that requires either manual installation or installation via (the also unofficial and manually installed) HACS. I'm not sure how it works, but it's possible someone could write a custom app/driver for Hubitat that works similarly; I'm not aware of any effort. But on both platforms, it's "unofficial"/community code.

I'm not aware of anything equivalent to the "standard" Tuya integration, either. There's definitely nothing built in, but I'm not aware of any community efforts, either. (I could be missing something; just going by what I found with a quick search and what I remember from reading about this before--pretty much everything wants you to convert to Tasmota, and I do know that exists.) Again, someone could probably write such an integration if they wanted, but most users here prefer local integrations whenever possible, so that's my guess why anyone who's tried has devoted their efforts to Tasmota instead.

But on both platforms, it's "unofficial"/community code.

Well, there is one big difference: on HA it exists, on HE we don't know if someone even considers working on it or if it even technically possible (see here).

I am all for local integrations, but I prefer cloud over nothing. There are many official and community based could integrations for HE (e.g., Govee), and I use them for several devices. I wish there was something for the Tuya ecosystem as it really becomes an important player in the smart home market.

If it helps anyone, my use is for a wifi window curtain. The best I could find is the Smartlife Air node-red integration which for me has been pretty reliable.

Correct, we have no way of knowing what other community members (or staff) are up to if they don't tell us something.

I don't recall having read anything about this lately, so I would doubt it.

Regarding the technical feasibility, pretty much anything is possible, but some things may require an "in the middle" solution (HomeBridge is one example; it's not that Hubitat can't integrate with HomeKit, but you need a HomeBridge server in the middle because Hubitat's current architecture does not permit you to write something that can act in this capacity.) It looks like you would need something like this for local Tuya given the issue with unsolicited inbound UDP.

Sometimes, we get surprises. For example, MQTT also required an "in the middle" solution for the first year and a half or so of Hubitat's existence, then we got a built-in interface (something available to drivers, not a built-in client per se on Hubitat--but now entirely possible without an external system). It's possible we could get similar enhancements to the existing UDP support--but again, we have no way of knowing right now (but I wouldn't count on it soon).

In the meantime, if you have Home Assistant set up already, there is a community solution to get HASS devices into Hubitat (and a custom component on HASS for the other direction), or I suspect that you could probably also do this if you're able to get these devices into Node-RED (which technically doesn't require any custom code on Hubitat, just Maker API). Might be easier than waiting/hoping.

As Bert says to support local Tuya needs inbound UDP socket capability on Hubitat. Surprisingly that is not currently possible

Did you see that Tuya announced they are going to support local control on HA? I really which someone would port the Tuya Integration from HA to HE. I have a bunch of Tuya blinds which I have to control via some convoluted process which rarely works so I just use Alexa directly and not have it integrated in my HE setup. That and my Level lock are the odd balls in my setup.

I might do a go FundMe bounty to have someone port the Tuya HA integration HE. Who would be interested in contributing?

I came here for this same information. I've really tried to get off tuya but my ceiling fans and curtains run on it and flashing Tasmota to 8 devices that are mounted inside ceiling fans doesn't sound fun.

This news certainly sounds like a game changer to me.

Thank you for the realistic clarification. Even if it's not what I wanted to hear.

With Tuya working on local integration with Home Addistant. I'm hoping for a local API that we can leverage with Hubitat. More description I found in this video by Paul Hibbert. I'm game for messing around with porting HA to HE.

If you have an instance of HA or NR running, it is easy to bring Tuya devices into HE as virtual devices.

yes, although it must be said that this move from tuya does/should add to the business case for inbound UDP.
i like tasmota and all, but its a PITA, can result in device case marks/damage getting access to chip pins, introduces support/warranty issues and honestly just another layer of complexity that (should) just not be needed

I use their telescoping (pre-built) curtain rods/racks. Those are only available in Wifi.

Maybe someone understands what is happening with Tuya API V2: 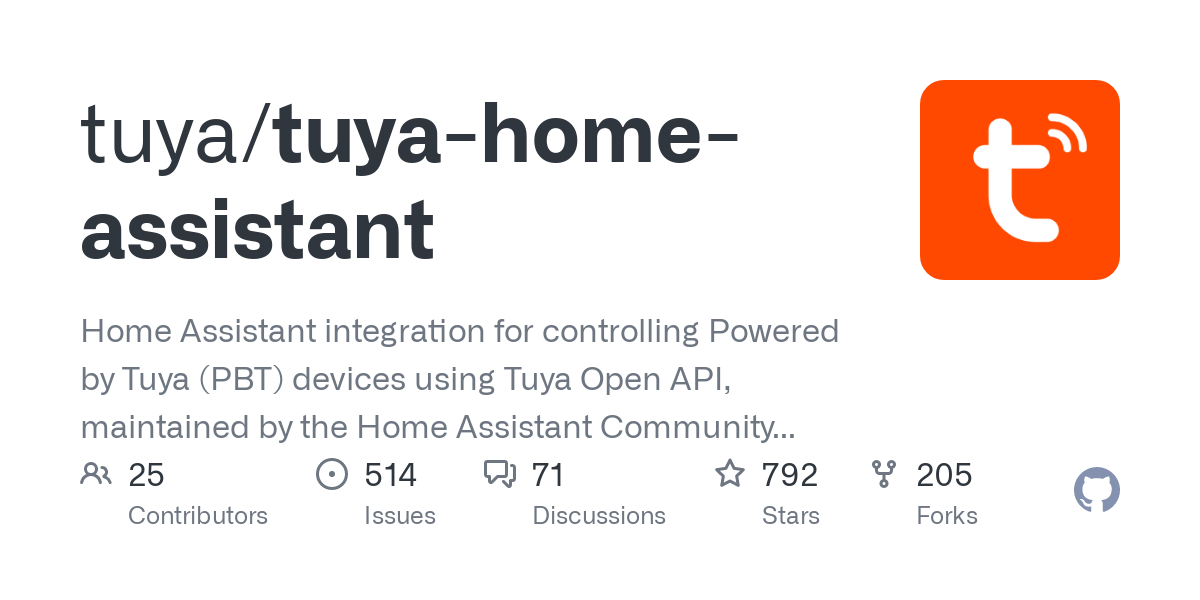 There will come even a solution without any cloud (i.e. purely local) ...

BTW: On all the new Tuya / SmartLife devices (that I tried) you cannot use "Tuya Convert" anymore to flash Tasmota firmware.

Unfortunately, there are some 'Powered by Tuya' Zigbee devices that do not work with HE. For example, latest revisions of TS004F scene switches. The cheap Zigbee Tuya motion sensors are another example. These work without any problems paired to Tuya zigbee hubs, that can be purchased for just $18 ..$19!

Yesterday I remembered that I have in my junk box a Tuya E12 color WiFi bulb that I never used. It took me less than a hour to setup the Tuya V2 experimental integration in HomeAssistant. The few Tuya devices that I have, including a Zigbee hub were successfully linked to HA! I quickly tested controlling the bulb from a Node-red flow and it worked really fast. I even pulled out the WAN network cable from my router just to be 100% sure that I control the bulb without access to internet.

So, Tuya V2 local control integration for HA is already there and it really works locally, once setup.

For clarity. I am not pushing for local control, I just want complete support for the Tuya V2 cloud. One of the reasons I got a Hubitat is to not have to use two or three different home automation services / apps. Currently I have to use four apps (HE, Alexa, Tuya, and HK {Level Lock}). It would be great to eliminate the Tuya app from the mix. I make this clarification because it doesn't require inbound UDP support and I don't want my desired to be conflated with the issues of local control.