There's plenty of discussion about bulbs and that it's a good idea to have their own Zigbee network so as to not interfere with everything else Zigbee. Using Hue, a 2nd Hubitat, or as you've done, a "spare" ST hub (although cloud) helps, I imagine.

This is exactly why I replaced my Crees with Sengleds.

I had basically just started with my newly install HE and was getting this issue—extremely slow load times on the web interface. My HE had just the official Amazon Echo Skill, Hub Link (to ST hub), and Rule Machine for apps (no custom apps) and just GE Z-Wave Plus Dimmer and GE Z-Wave Plus Switch (from https://raw.githubusercontent.com/Botched1/Hubitat/master/Drivers/) for custom device drivers.

Immediately after I deleted that orphaned RM child app by linking to it from the device details page (as the orphan didn’t appear under Rule Machine on the apps page), my HE performance went to normal (i.e., pages load quickly), and it has remained normal for about 12 hours now.

Can’t prove a relationship here, but I would guess one actual root issue causing these slowdowns may be within the official RM app or may at least be surfaced from some other source by RM. Some earlier posts on this thread mentioned that they have only apps A, B, and Rule Machine or apps X, Y, and Rule Machine… it seems to be a common factor and may be one culprit.

My web interface is slow also and seems to get slower the longer it goes after a reboot. I have tried all the app disables, etc.

@hans.andersson You mentioned a device that said it was associated with a rule that didn't exist. I have some that say they are connected to an app or rule when they have been deleted from that app. How would you clear that from the device? Don't know if that's the problem, but can't hurt.

@hans.andersson You mentioned a device that said it was associated with a rule that didn't exist. I have some that say they are connected to an app or rule when they have been deleted from that app. How would you clear that from the device? Don't know if that's the problem, but can't hurt.

@j715, for orphaned rules that show up in device details pages, I just clicked from there into the orphaned rule and then deleted the entire thing. For other apps, this approach may not work.

Just took me 15 minutes to create this simple rule. Everytime I clicked on something I had to wait from 5 to 15 seconds before the next selection came up. Frustrating. I have done all the things suggested above and nothing speeds it up. 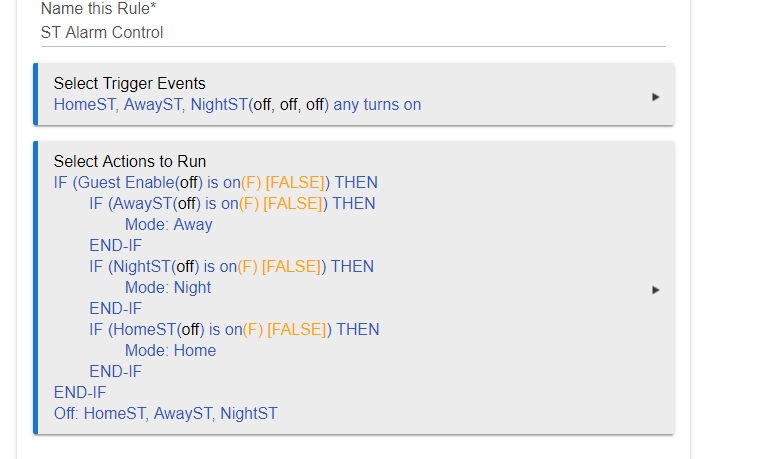 Do you have a netgear switch attached to the hub by chance? If so, reach out to support, they may have a fix for you.

No on the Netgear. I have an Asus router.

Chuck.schwer contacted me and pushed some change to my hub. It helped a whole lot. Gonna see what happens over the next few days, but so far it looks like it worked.

Do you have a netgear switch attached to the hub by chance? If so, reach out to support, they may have a fix for you.

Patrick, you mentioned in the live chat the other day that certain router chipsets were having this slowdown issue. Is there a list of which of these chipsets are having this issue?

No list of choosers, we know that certain Netgear and Asus devices are effected and the fix works.

We are tracking this and applying a fix as we get reports.

I've been having a lot of slowdowns lately (the last 3 months) - is this a known issue with TP-Link switches? I have the original version of the Hubitat (the one with the radio USB stick). It is frustrating that I have to reboot the Hubitat every 3 days, to avoid the massive slowdowns in the UI. If I leave it for another day or so, the rules also delay by many seconds, getting progressively worse - I've seen it delay by 30 seconds or so. And then they never fire at all! Disappointing. I cannot recommend this product to friends anymore, although it was working well for a year with the same switch.

I suppose I should open a ticket, although soon my house will be under renovation so I may have to wait a few weeks.

In the meantime, I will try disabling devices to narrow it down - I do have DLNA Player devices (3 Fabriq speakers). I have to disable them to avoid annoying the contractors anyways - maybe I will get lucky and it will mitigate the slowdown and hangs...

My web interface is slow too and I have an Asus router. What do I need to do?

My C5 hub had the patch applied about 5 days ago. The next day after the patch the hub stopped communicating totally. I redid the ends on my cables to no avail. I discovered the patched C5 hub now will not connect to the TP-Link switch it had always been connected to.
I moved the hub to my cisco switch and it works fine. The same cable & switch that would not work with my patched C5 hub, ran my Hue hub no problem, but refused to connect with Hubitat hub after the patch. I had not changed anything else on the switch or hub and all my devices have static IP's.

My main C4 hub does also have slowdowns, that a reboot fixes. 7 seconds for a light to come on via motion

ny progress in getting any diagnostic tools.

Well, every time I submit a ticket about the same issue they give me the same formatted answer: either "deactivate all your cust code" (which I did, to no avail) or "send us screenshots"... screenshots of what??? Nothing works... and it's been days. How do you send screenshots of a system that every now and then gets slow? Should we send screenshots of the very same logs they refuse to give access to users? Hahaha!

I've got two hubs, one that runs nothing but Hubitat native apps and another where I have 3rd party apps.

These 2 hubs are connected with the Hubitat Link to Hub\HubLink apps. It makes no difference with either hub or with or without 3rd party apps running. I'm still 3 seconds minimum opening a dashboard on my phone in an environment where my wifi is quite strong.

Editing Rules is so painful. When you make a choice in Rule machine it feels like I'm working on a dos machine from 1984 as I watch and wait for my choice show back up. As much as I love local control and the Hubitat team's approach, if it were not for my desire for a hobby, home automation using Hubitat would be a non-option for my family.

At that most basic level, accessing dashboards by family members and how slow that is, is a deal killer.

Are your hubs the C5 model? Have you contacted @bobbyD via support@hubitat.com yet? The C5 hub network connection can have problems with some network hardware, resulting in sluggish/erratic performance like you’re describing. Hubitat Support can correct this issue if it applies to your hubs.

Main hub is a C4 and is running nothing but Hubitat apps. Second hub running third party apps is C5. Slow dashboard access and slow performance when creating or editing rules is happening on both hubs. For dashboards I'm only allowing specific devices to show up on a given dashboards and not letting each dashboard have access to all of my devices.

Slow dashboard access and slow performance when creating or editing rules is happening on both hubs.

Sorry for the troubles. This is not normal behavior. May I ask what browser are you using? In any case, if you didn't do so already, please send us an email so we can further investigate.

Browser question is a good one @bobbyD. I'm running the Chrome clone Brave on desktop but chrome on my phones.

I am a fairly new user of Habitat so my experience cannot be compared to what it was before using Habitat.

I have the latest version of Habitat, and I am about 63 Z-wave plus devices, and about 15 rules so far. I noticed from the MakerAPI or the Hubitat interface (device page or app page) that most request takes above 3 seconds. This is after a clean reboot. If I keep Hubitat running for more than 5 days, it goes up to 20-25 seconds.

My hub and Internet routers are at 1 meter from each other, located at the middle of the first (and single floor). All devices are within 30 feet of this center point.

Do I have already too many devices or apps?

about 63 Z-wave plus devices,

63 is a 'moderate' sized collection to my eyes. Naturally it depends on the types of devices. 65 Power Monitor outlets is massively different than 65 door sensors. Look at live logging and watch for 'bursts' of logs. I personally have a upper limit of 4 'cause-and-effect' events per second. That is, one motion event causes one light on/off event = 1 cause-and-effect. Currently I run at about 2 seconds per 'cause-and-effect' events... so quite far from my imaginary limit.

Are you seeing page display slowdowns or 'cause-and-effect' slowdowns or both? There are different workarounds for each.