I have a handful of the Jasco/GE/Honeywell/UltraPro in wall dimmer switches that were causing me trouble trying to sync their on/off state to switches.

I tried Mirror, Room Lighting, Switch Bindings (community app), and Rule Engine. I was finally able to get Rule Engine to mostly work if I forced a "Refresh" command on the dimmers.

Looking at logs showed that the builtin "GE Enbrighten Z-Wave Smart Dimmer" driver is not sending "switch on" events without the refresh.

I switched to the builtin "Generic Z-Wave Smart Dimmer" and these events are sent, but that driver is missing the double tab functionality. I'm using the user driver "GE Z-Wave Plus Dimmer" by "Botched1" as a workaround since it has double tap capability and sends the on/off events as well.

Since both of those drivers work, I suspect this is a bug in the "GE Enbrighten Z-Wave Smart Dimmer" driver.

If these are not z-wave plus switches (you don't specify what model they are) they will not report their status without being refresh/polled. You will need to install the built ini z-wave poller app to get them to report properly.

For Non-Z-Wave Plus you will need to poll them.

My non-Plus GE switches defaulted to the following drivers:

If these are Z-Wave Plus switches they should report promptly, I've never had an issue w/my Jasco (GE/Honeywell/UltraPro) switches reporting status. Best drivers IMHO for Jasco Z-Wave Plus are:

To add on to what others have stated about model and whether yours are Zwave plus and easy way to tell if they are Zwave plus is by pulling up a dimmer, scroll to device details and see if 0x5E is included in the Data In Clusters. 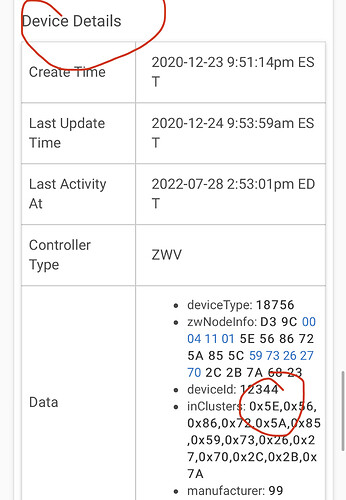 If you don’t see it then they are older non plus and due to patent issues at the time of manufacturing they don’t report status. I ended up replacing all of my non plus with newer ones due to lack of state reporting. Polling never worked well for me.

While I have automated as much as I can, my family still has to touch a light switch every now and then.

I have 33 devices moved over to Hubitat from ST, 29 GE switches and 4 Iris motions, with 70+ more to switch. I noticed that physical events are not being logged consistently for my devices. I may get an on event, but may never get an off. This is very problematic for my shower light where I have a simple rule that looks for the on event to also turn on the exhaust fan switch. A…