We are pleased to announce Release 2.0 of the Hubitat Elevation platform. After months of development effort, extensive testing, and great help from many of our users as beta testers, this new release marks a big step forward. Release 2.0 features an entirely redesigned user interface with many new features and ease of use throughout. Yet, you will immediately know your way around, and intuitively grasp how it works. All of the features you've grown accustomed to are still available, simply improved. We've emphasized local mobile-device access to the interface. We've added users and secure login. We've added Lock Code Manager. The list of features is long (see below). 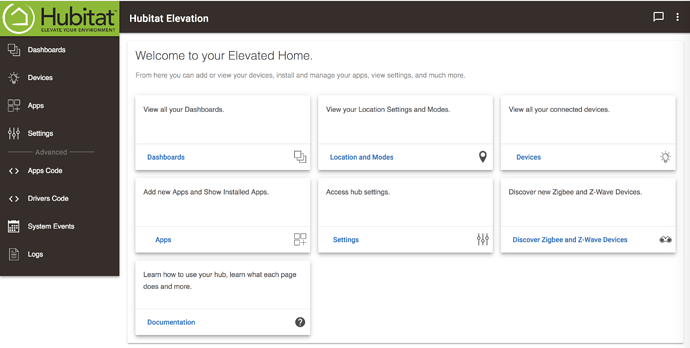 Please note, the update process takes about a minute to download and extract the hub update (depending on your Internet connection), and 1-2 minutes to perform the update after you click 'Update Hub'. We recommend that you periodically download a backup of your setup from the Settings page, Backup and Restore. Now, before you update to Release 2.0, would be a good time to do that.

Special Note for Release 2.0: If, for whatever reason, you decide to roll back to a prior 1.1.x release after upgrading to 2.0, you may want to restore your database to its last 1.1.x version as well. If you don't, nothing bad will happen, but inputs for devices on device pages will have extraneous text displayed. We've upgraded device inputs to have meaningful headings, a feature missing in prior versions.