Hi, I'm coming back to Hubitat after trying other systems that just don't work as well.

I am trying to minimize the number of hubs and controllers that I'm using at the moment. I have three Hubitat hubs. I have a Hoobs hub and a HomeSeer hub. The Hoobs hub is terrible, unreliable, difficult and I would like to eliminate it completely and only use Hubitat.

I have Apple home pods in each main room of my house and my kids all carry Apple phones around, and they use Apple laptops. What is the most 'native' way to integrate 'Siri' control and Apple interconnection? Is anyone working on a native connection to Homekit that does not require a different hub? Is there anyone in the community that does this kind of thing for a fee, or who could help?

I also have a home theater system called "Lync" from Home Theater Direct, and it can be controlled by HomeSeer4. Is there anyone in the community who professionally develops plugins so I might eliminate the HS4?

I don't know of any apps that link directly between HE and HK without using a separate server. Homebridge is really the best way to go with either @tonesto7's Homebridge V2 app or HB Plugin via Maker API by @dan.t.

The one thing you cannot do with this set up is control Apple Homekit products via HE. There is a more technical solution available if you really need to do this (but it requires yet another server) OR you can fake it by using virtual devices in HE exposed to Homebridge.

I don't have any AppleTV or similar products in the house, so I don't have a need (at least now) to control apple products directly. My desire is to be able to use 'Siri' to control regular Z-Wave devices and scripts.

I keep trying to find a single device that connects z-wave and homekit, but I'm not finding anything. The closest I'm finding is using something like Z-Way on a Raspberry PI in combination with Home Assistant. But frankly, HA seems like a huge problem without any kind of real support.

HOOBS and Homebridge - I've had terrible experiences with reliability and stability. If you follow their feed, you see bug after bug after bug.

Is there a specific technical reason why HE cannot talk to HomeKit? Apple opened up their API and interface about a year ago, if I remember correctly. No one has built a plugin for HE?

I use HE just to pair and local control of all my devices, but then use HomeKit for 100% of the dashboard, app control, and voice control of the devices. I also have HomePod Minis and Apple TVs in every room of the house.

Works perfectly, enjoying native Apple control of everything but also having access to hundreds of quality devices that don't carry the native HomeKit price tag.

HOOBS and Homebridge - I've had terrible experiences with reliability and stability.

Weird. I have two instances of HomeBridge, using @dan.t's MakerAPI integration. They're rock solid. No crashes, no bugs. Just work. The only HomeBridge plug-in I'm using is @dan.t's.

No crashes, no bugs. Just work.

Same, Maker API to Homebridge has been ROCK solid, zero issues, never crashed once in months.

Well, maybe I'm doing something wrong on the HOOBS/Homebridge side. I really like the comment from @lawsonad, that's exactly what I want to be able to do.

Right now all my home devices are 'native' in HE, by which I mean that I included each of them one by one directly, and I've done some simple automation scripting using HE, like turning on outside lights when it's sunset, changing illumination levels at night, etc.

When you @lawsonad say that you use HomeKit for 100% of the dashboard, where are your scripts running? On the HE, correct?

Would anyone here be willing to help me figure out how to do this?

Would anyone here be willing to help me figure out how to do this?

Sure. I don't use HOOBS, I use homebridge-config-ui-x, with these instructions to setup HomeBridge: 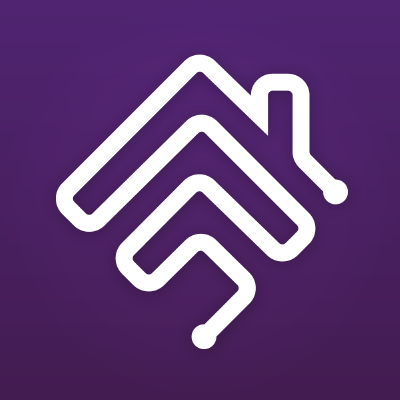 HomeKit support for the impatient. Contribute to homebridge/homebridge development by creating an account on GitHub.

Most of my automations are done in Hubitat (actually Node-RED, but that doesn't matter). I used these instructions to setup the MakerAPI integration:

This new plugin does not rely on the "Homebridge App" in Hubitat and utilizes the MakerAPI and it's event stream to communicate with Hubitat. A few caveats upfront: You will have to redo all of your room assignments in the Home App on your phone Installation: 1. Hubitat MakerAPI App Configuration Under the Hubitat Web Interface, Click on Apps in the left side menu. Click on the button +Add Built-In App Select Maker API from the list of apps Enable Allow Access via Local IP Address T…

Sure. I don't use HOOBS, I use homebridge-config-ui-x, with these instructions to setup HomeBridge:

This is what I’m doing as well and it works great running 4 instances. 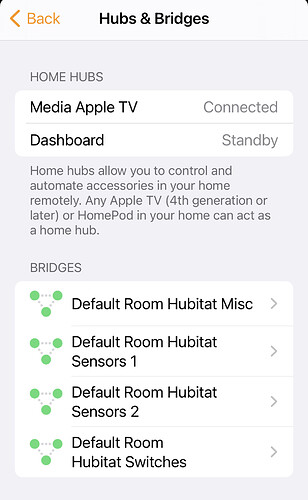 When you @lawsonad say that you use HomeKit for 100% of the dashboard, where are your scripts running? On the HE, correct?

I don't use HE dashboards, but instead use the native Home app on my Apple devices to see status of my HE paired devices. As for scripting or automation, I do 98% of my automation programming in HE using Simple Automation Rule app, Rule Machine app, and Mode and Motion Lighting app. The only automations I do natively in HomeKit is ones that play sounds on my HomePod Minis (doorbell chime, HSM siren, etc).

My next project is stand up a true VM server and break apart my Homebridge into multiple instances. I've read multiple times that having one large Homebridge instance for all your devices can slow down the device refresh from HomeKit as it has to refresh every device per hub instead of selectively on a per device basis.

I have a fairly large system and try to keep individual instances to under 100 devices.

I just broke 50 devices in Homebridge, slowly growing since Oct 2020.

Here's the thing, and you should consider this an opinion, but it's not based on guesses, but knowledge from other companies that have done this. Commercial HomeKit licensing is expensive. So do I want Hubitat to sink their limited resources in paying Apple licensing fees for HomeKit commercial use? Big fat NO!

Adding Homebridge is simple and it's cheap for the end user. Something is wrong in your setup if it's unreliable. I have been using Homebridge with @dan.t 's MakerAPI plug-in as @aaiyar mentioned, for years. It should be working perfectly. If it's not then you have something wrong on your network and/or the computer that is running Homebridge.

Now if you're expecting to be able to get measurement data from things like temperature sensors that are HomeKit compatible, but not directly HE compatible, then you cannot do that with Homebridge. I would instead look at this project that will allow the use of HomeKit Controller in Home Assistant and bring those devices into HE. If you wanted to, you could potentially eliminate the use of Homebridge by also exposing devices from HE back to HA with this second integration and then use the HA HomeKit integration. That is different from their HomeKit Controller integration in that it exposes devices to HomeKit, rather than acting as a HomeKit bridge.

Both are simple to setup, and frankly although I find HA difficult to automate in, the good thing about the HA to HE integration is you don't have to. In fact, whether you're using the HomeKit controller integration or joining devices directly to HA to get them back into HE, it's only when joining a device that you ever need to touch HA. Setting up HA on a RPi or a virtual machine running on spare computer is very simple because they have created a ready-to-use image.

So you may be wondering, if HA can add HomeKit integration, why doesn't HE just do that. Well they could, but it would cost them a lot, and in turn it would likely either drive the cost of the hub higher (nobody wants that), or it will rob valuable resource from a small company for little benefit versus the easy to add Homebridge or HA. Since HA is an open source project, they fall under the non-commercial use category and so don't have to pay anything, and don't have restrictions. Same with Homebridge which uses the HomeKit APK. Although, I wonder about that long term, as HA does sell a version already installed on an ODROID-N2+, which constitutes commercial use, so they're actually breaking the rules a little.

I'm getting the same results as everyone else.. my instance of Homebridge has been rock solid since I began using @dan.t solution. I also run Node-Red on the same machine. Both are NodeJS apps and as a result they just seem to go on and on working every day for a very long time. (The date stamps on the directories on my computer holding Homebridge is Jan 2019. Node-Red is April 2020 ) I do have multiple instances of Homebridge, for no reason other than I can.

I have a Thermostat and have a Homebridge instance dedicated to it. Mostly I just wanted to understand how-to and now I know.

NodeJS can run on almost any Always-On Computer.. many use a Raspberry, as I did to first get my feet wet. Once I determined that I would be using it 'forever' I moved it to run on a Mac Mini that began life as a Media Server.

Once I determined that I would be using it 'forever' I moved it to run on a Mac Mini that began life as a Media Server.

I’m running mine on a 2009 iMac. Probably a bit of a power hog but there is a bunch of other home automation stuff running on the same machine.

If you're a Mac user and have either the budget for a new Mac to be always on, or have an old Mac around (I'm using a 2011 MacBook Pro configured to stay running with the screen closed), it's a powerful, stable and low power consumption platform to run many things on at once.

My MacBook Pro is currently running Node.js for Google Assistant Relay, Insteon server, Homebridge, Google CastWeb API, and Virtual Box running a HASS.IO image. No slow downs. Bonus for a Mac household is you can easily access it with the built-in screen sharing. I'm also running TeamViewer should I ever need remote access to anything on the MacBook or any of my HE hubs via a browser on that MacBook Pro.

If you have reason for a computer to be always on before jumping into Homebridge or Node-Red, adding several NodeJS instances seems to be one of the easiest decisions around.

Probably a bit of a power hog but there is a bunch of other home automation stuff running on the same machine.

Not sure about the Mac Mini, but the 2011 MacBook Pro I'm running everything on only consumes 5 watts.