Is there a way to control Leviton WiFi/Cloud devices? I have a WiFi switch controlling my porch light and while I'm planning to eventually move to Lutron devices, I have this now and was hoping to control it via Hubitat. It's not in the "supported devices" list. Does that mean there's no way to control it or is there an "unofficial" driver etc?

I assume this question has come up before but I can't find an answer.

I have the same question. I have mostly zwave switches and dimmers, but have a few wifi switches in my shop because it is too far away from the house to get the zwave signal.

y zwave switches and dimmers, but have a few wifi switches in my shop because it is too far away from the house to get the zwave signal.

I've asked before and the answer was "Not at this time." or something like that. I'm still interested, but have only purchased three of them that I'll figure out how to integrate somehow (even if I end up just using them in the attic or something and going through ST for the connection.)

IFTTT is the easy answer. You can also use Google Assistant, but controlling from Hubitat requires you setup a node.js server. More work, but one heck of a useful connection, and you can make Google Home devices speak TTS messages in the native voices.

All I ever hear about IFTTT is that it’s flaky and unreliable for actions that need to be timely. Having my porch light come on minutes late is not useful.

I also don’t use Google Assistant. I want integration with Hubitat since that’s the hub I purchased. Plus that’s where I’m expecting to hook up the motion sensor.

IFTTT is that it’s flaky and unreliable

It is neither of those in my experience with many different services on IFTTT. It is slow, very slow in fact at times, but I wouldn't equate that with reliability. When it's slow, it's consistently slow

Sorry, but you cannot directly integrate ring at this time. There are workarounds
for motion and such. Ring is cloud, so expect that you will have a cloud solution no matter what.

Not sure I understand the comment about Google Assistant, since you want Ring to trigger an action on HE don't you?

The interesting question is of course, why anybody would buy a hub, any hub, if the protocol required is not directly supported and expect that it should work without a man in-the-middle approach. But then again, maybe it be just me...

This thread is about Leviton WiFi switches. Not sure how Ring is relevant.

Sorry. Replied to the wrong thread by accident.

Thanks for the snark, but that’s sort of the entire point of the thread. I was specifically asking if there is a way to do this, either officially supported or with a community-provided extend. Hubitat documentation isn’t great, so asking the forums if something is supported seems to be the best way to find out. Support for community extensions is also one of the selling points for Hubitat.

Do you have a URL to the Leviton Switches are you using?

Just a note - I used IFTTT with both SmartThings and Hubitat and found it reliable and fairly low latency.

This is the one I purchased. 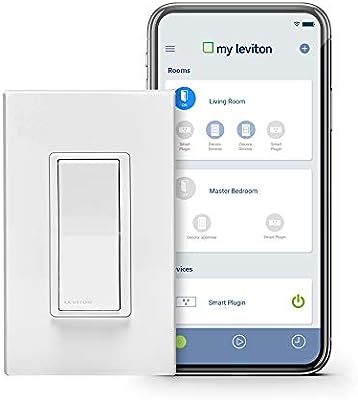 I see Leviton as an option in IFTTT as well.
You could control it with Alexa or Google.
While I have not tried this, I would think you could create a virtual device (switch) in Hubitat and use that to trigger IFTTT to turn the light on or off via the Leviton cloud.
I couldn't tell how it's done on SmartThings although the documentation I found via Google mentions needing credentials for the Leviton account.

I would be interested in that. Is there a way for Hubitat to actually recognize devices registered with Alexa? Or only to trigger routines? Still useful if the latter, but actually exposing devices would be better (especially since Alexa could then also be the conduit to my thermostats).

Sounds like you have a lot of cloud dependent devices to deal with. I know @ogiewon can help you with the Alexa method going. He also wrote an HE driver for Google Assistant Relay which you can use for TTS to a Google Home device, but you can also use it to silently control devices via Google Assistant. That doesn't require you own a Google Home, you simply need to setup a Google account and you use Google Assistant, which you already mentioned you don't use, but to be honest I don't really either. I almost never talk to my Google Home Mini. It just does certain announcements for me and the Google Assistant Relay driver for HE silently controls some cloud devices I have, for which there is no option in HE at this time.

It does require you set up a standalone Node.js server on a Raspberry Pi or spare computer, so that really depends on your skill and comfort with those sort of things (although it's not too hard actually). The Google Assistant Relay is quite valuable to me. I'm doing some things that just wouldn't work well via IFTTT as the latency is too slow for a few of them (not all IFTTT tasks are slow, but some are really slow). Google's cloud on the other hand is really fast and reliable, across the board.

Anyway, here's a post that describes a few of my most recent uses for it.

I actually only have a couple. This one light switch and my thermostats. I don’t actually care too much about getting the thermostats in Hubitat. It would be nice but not critical. The light switch I want to automate. To my knowledge Echo/Alexa doesn’t support motion sensors (nor z-wave) hence wanting this in a different hub.

I’m frankly wondering when Amazon is going to ship an Echo with a full-fledged rule engine and Z-wave + Zigbee antennas (and when Google will do the same) and just crush most of the existing home automation market. The Echo Plus with Zigbee hints at the inevitability.

I'd really be surprised to see Z-Wave show up in an Alexa device. I don't honestly believe they wanted to even go with Zigbee, but for smart lighting, that's the number one choice. If they have any kind of rule engine (and you could argue that Alexa Routines are a rudimentary early version), it will be cloud-based. That's not what I want personally.

It's going to take at least another 10 years before we have the stability and speed from the cloud that this kind of thing demands. There are just too many major infrastructure changes that still need to occur. Edge computing, like what Hubitat is doing, is taking hold. You can expect to see more of that in the next 5 years than full cloud only solutions. The evidence shows that the industry is rethinking that strategy.

"Cloud" computing (done correctly) can be pretty darn reliable and fast. I see the larger problem as the "last mile" of the network connectivity. There will be people located at the end of a network "dirt road" for a long time and they want something that works reliably.

I don't think most people care about Edge vs Cloud. They care that "it works", which is what Amazon and Google are capable of delivering. I expect we will see most "smart home" tech be cloud-based for the foreseeable future and "on premises" solutions will remain a niche, becoming a smaller portion of the market over time. Compute in the cloud is just simpler for most things, including automation. Hub gets stolen/broken? Plug in a new one and sign in and you’re good to go. Complex rules overwhelm your hub? Who cares, it’s running in AWS. Need hub updates for new integrations? Nope. In the cloud. In fact this is the biggest plus for WiFi over Z-Wave/Zigbee. You don’t care about the hub.

People who are willing to invest in home automation but can’t get reliable internet connections will be a niche even within the niche of home automation.