I have a couple of Hue Motion Sensors that I could not get illuminance reporting from and had to resort to purchasing a Hue bridge to update the firmware. After the update they seem to be working much better but only report illuminance changes when there is motion detected. This leads to a couple of questions.

My observation from the logs.

The answer to both 1 and 2 is no.
Motion temperature and illuminance are all separate events that can be configured independently. 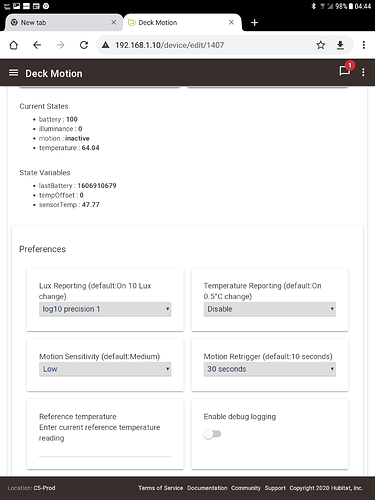 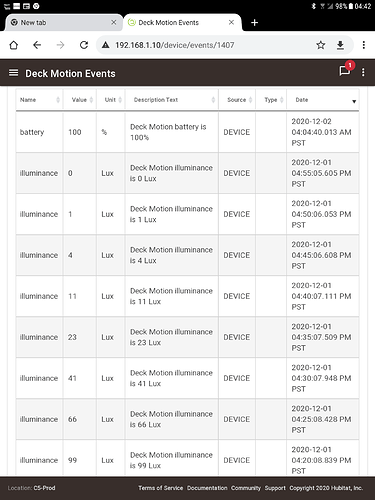 I am not seeing any events for LUX in the event log. I have 2 of these sensors, one connected to my C-5 hub and the other to my C-7 hub.

Both exhibiting the same behavior. 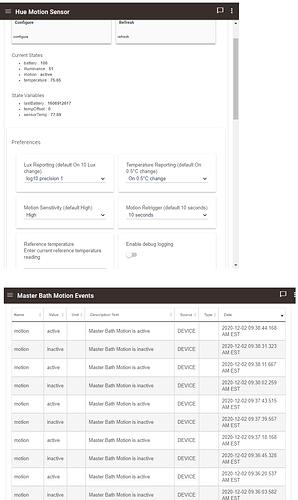 i don't have a good answer for this, I've seen it happen before then within about a day or so of first inclusion they start reporting.
As a test, if you change this to use the motion or temp trigger do you get ledgit values back?
As an asside, I've seen this issue even with sensors that have the latest firmware from hue...

When you trigger motion on the device, are you seeing a red flash?
If so, the device is too far from the hub to receive acks, this can also cause issues.

After experimenting and observing I have come up with the following in case anyone else has these sensors and the same question.

The first test was to tape over the motion part of he sensor so it couldn't generate motion events.

The MINUMUM reporting interval for LUX changes is 5 minutes and will be reported ONLY IF LUX CHANGES per your preferences. I was using "On Lux 1 change".

The second test was with motion sensor active. The MINUMUM reporting interval is 5 seconds ONLY IF LUX CHANGES per your preferences during the motion retrigger interval. I was using 10 seconds retrigger for motion.

What I don't know is if the LUX interval is a polling interval in the Hubitat driver or the event reporting interval that is built into the sensors firmware.

These tests were conducted on both the C-5 and C-7 hubs, the sensors were updated to the latest firmware prior to testing.

Hope this makes sense and helps others looking for this info. 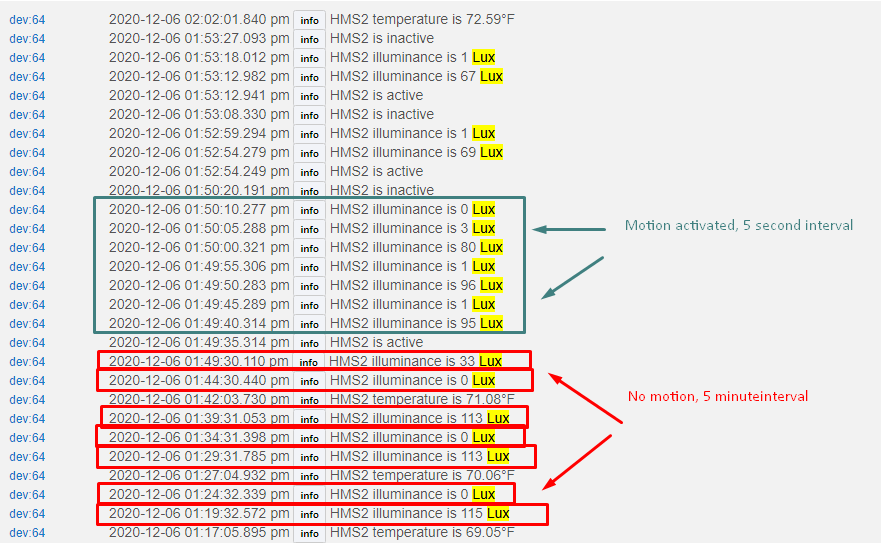 a polling interval in the Hubitat driver or the event reporting

This driver, as is the case with almost all Hubitat drivers doesn't include any polling.
So this is Hue being "helpfull" in sending a lux report outside of the 5 minute minimum setting when motion is detected...

Mike,
Can you tell me if it is a product of the sensor or the Hubitat driver when motion is activated that it always triggers the "motion" event before the "illuminance" event?

I wouldn't count on one hapening before the other unless you selected the lux on motion event reporting option.

Similar experience here with the hue sensors. I will get an illumination reading if motion is active and the illumination level has changed (since the last report) by more then the threshold setting. A change in the illumination alone does not immediately generate a reading.

@mike.maxwell this has implications for the motion lighting app where illuminance is used as a restriction to turning on a light. The lux reading used as the restriction could end up being quite old. Is it possible to have an option in the app to have some short delay to enable the app to read the value that is generated just after motion is detected?

I will get an illumination reading if motion is active

This sounds like the sensor is running old firmware.

After the update they seem to be working much better but only report illuminance changes when there is motion detected.

That is what I am seeing with, apparently, the old firmware version (although I bought the thing yesterday at Home Depot). I also verified @eugenevital 's findings with the tape over the motion sensor: 5 minutes to report changed lux readings.

I ordered a Hue hub to update the motion sensors, but now it could look like it might be to no avail.

I think it's a year and a half old per this:

6.1.1.27575 (paired it back to my hue bridge temporarily to ensure the latest firmware is on board)

This sounds like the sensor is running old firmware.

Spent the last 20 minutes testing this on the above firmware (which is the latest available - dating back to March 2019).

(1) Same result - illuminance mostly (but not always - maybe about 90+% of the time) updates on a lux threshold change when the motion sensor goes active.

(2) While the motion sensor remains in its active state, illumination changes are also mostly (but not always) reported as soon as a change occurs

(3) while the motion sensor is inactive - nothing happens on a change in illumination beyond the threshold setting (in either direction). I assume it will get reported at some point (eg when there is a temperature report). I'll leave it alone somewhere over the next day to see what happens.

Only reported this now as I had not taken any notice of the illumination reading until I started messing with the motion lighting app using this as a condition.

EDIT: For case 3, it seems to update for a change in illuminance at a minimum interval of 5 minutes (when set to 1 lux change reporting). When set to report at the same time as temperature we get nothing at all. I assume the threshold testing is done at the end of each 5 minute interval.

From the motion lighting app perspective I suggest that we can use the device driver behaviour to test for illumination when motion is triggered rather than use 5 minute old data. Hopefully the team can take this on as an option in the app. Any chance of this @mike.maxwell?

(2) While the motion sensor remains in its active state, illumination changes are also mostly (but not always) reported as soon as a change occurs

That could be because of the 5 second minimum time during active motion observation that @eugenevital noted above.

(3) while the motion sensor is inactive - nothing happens on a change in illumination beyond the threshold setting (in either direction). I assume it will get reported at some point (eg when there is a temperature report). I'll leave it alone somewhere over the next day to see what happens.

Nope. I looked at the overnight logs with the motion taped over. No lux reports even though some temperature reports.

I get nothing when I set the driver to report lux upon motion either. Nothing.

There's a disconnect from what the driver seems to promise and actual. Or, it needs some tweaking.

No lux reports even though some temperature reports.

What settings do you have it at?

And you're seeing lux reports as the temperature changes?

Just curious what you are using the lux reports for? Since refresh gives you the updated lux change, you can just set a rule to call it at the frequency you need. Obviously, you'll want to be conservative, not calling faster than 5 min or you'll likely just kill the batteries quickly.