if the hub had built in wifi I might be able to locate centrally unfortunately I don't have Ethernet runs everywhere. I guess I could get a wifi to to Ethernet box too but.. yuck

Can someone recommend a wifi extender/booster I can use to add ethernet ports to my network?

My reason for going with a booster is once I have good wired internet, I will be in need of an extender anyway so this purchase won't be useless or short term.

I'm hoping to plug my hue bridge and hubitat into ethernet (unless hubitat doesnt need ethernet?)

note: i have no router, just a small puck with only usb charging for wifi atm.

f the hub had built in wifi I might be able to locate centrally unfortunately I don't have Ethernet runs everywhere. I guess I could get a wifi to to Ethernet box too but.. yuck

How about using a powerline adaptor.
My router is tucked behind my TV which is not an ideal position to fit the hub. I have used a powerline adaptor to a more suitable room in my house, put in a NETGEAR GS108 8-Port Gigabit Ethernet Network Hub and have my hubs hanging off of that.

You may wish to consider a Powerline setup.
Since for this purpose speed isn't important, a pair of Pwerline AV500, should be sufficient.
I've used TP-Link, they seem to be reliable. That will allow you to put the Hubitat anywhere there is a plug.
https://www.amazon.ca/TP-Link-Powerline-Adapter-Starter-TL-PA4010KIT/dp/B00AWRUICG/ref=sr_1_3?dchild=1&keywords=tp-link+powerline+av500&qid=1594828175&sr=8-3

How about using a powerline adaptor.

I am a big user of powerline and MoCA adapters where I can't get Ethernet.

In fact, MoCA 2.5 can give 2.5 Gb connections now... I don't actually have a 2.5Gb network infrastructure, but I can get 940 Mb consistently through a MoCA 2.5 connection. Yes, it is $200+/connection by the time you buy the 2 adapters, but for applications that I need throughput, consistency, and reliability I'll take that over wireless any day.

I use moca a lot..works well once you have clean catv plant

Here's a wifi extender by TP-Link which has an ethernet port on the bottom. I use it as a wifi extender but it will also allow an ethernet connection. For me, installation was a breeze. Press the wifi connection button on the extender and if you finally get a router, press the WPS button and it links quickly. For $20.00 USD works great. Found on Amazon.
TP-Link N300 WiFi Extender,Covers Up to 800 Sq.ft, WiFi Range Extender Supports up to 300Mbps Speed, Wireless Signal Booster and Access Point for Home(TL-WA855RE) https://smile.amazon.com/dp/B0195Y0A42/ref=cm_sw_r_em_apa_i_Uk0dFb83QYARP

extenders can half your wifi bandwidth so I avoid them

Single radio solutions do. If you look at multi-radio devices, you're losing that one radio as a backbone, but get the other one or two free and clear. Yes, three radios are better than two, but we're talking Wi-Fi here. Dedicating a single 5GHz radio for the backhaul gives you a lot of bandwidth for your traffic. I have two dozen clients on my Orbi mesh, we stream two and three video services at a time, no deficit to quality. When it comes to Wi-Fi you get what you pay for.

Mesh systems differ from extenders. Mesh system work as you described most extenders/repeaters do not

Respect! My two boys like to game, so they agreed to the "attic-challenge" where they each pulled a cat6 cable across the house in our 4' in the center Florida-heat attic with 50 years of dust to their respective rooms. No way I'd do that.

Thank you. I pulled 4 wires last summer in my attic and i can relate to the heat experience i had. I was dehydrated for few days afterwards .

I can barely get my kids to take out the trash.

My wife complains about sweeping too but then turns off the Roomba when she wakes up.

extenders can half your wifi bandwidth

Mesh system work as you described most extenders/repeaters do not

This WAS very true, and my stance for years. However like everything in IT....

Wi-fi (802.11ac/ax and above) with MIMO (multi in multi out) have gotten so fast that, with proper deployment, you can achieve faster speeds than Ethernet. I know, I know WTF, right!!

I have a client that gets near or over 1GB speeds via wireless from extenders using these. If you set them up with-in range of each other, and have a 1GB back-end like FiOS it's possible. I deploy it all the time, and have one next week. Don't get me wrong I use these only where I have too. I would rather Cat6 wired connections, then MoCA, then mesh, finally extenders, just saying you CAN.

My wife hates seeing wires. So at my desk I use a lowly Wi-fi AC (Asus AC66u) router, reconfigured as a "media changer" (part of the built-in config) to turn WI-Fi into wired connections. As you can see I get a connection of 866.7Mbps (between this AP-changer, and the main AP) but my FiOS is only 100Mb by choice so it's not an issue. Again if I wanted faster I could upgrade to AX.

I do the same for a food truck/restaurant I work with. They were told by their POS vendor that they could NOT sell off-site. Loving when people tell me what cannot be done, I made it happen over a mobile hot spot - media changer - Dell sonic-wall VPN appliance - 2 POS machine and 2 prep/make printers. Everything has worked 2 years running.

Waiting for the next thing that "cannot be done"

EDIT: Note the RSSI: -28db If you are unsure what that means read this, or just stay under -50 (really it's above but lets not confuse things). Here is a Android app to measure. I have never found and iphone/ipad app that measure 802.11ac/ax RSSI if anyone knows of one please LMK

OK now that's just funny I literally just got this email right now!! (not to mention the fool put it ON the package box not IN the box, gawd) 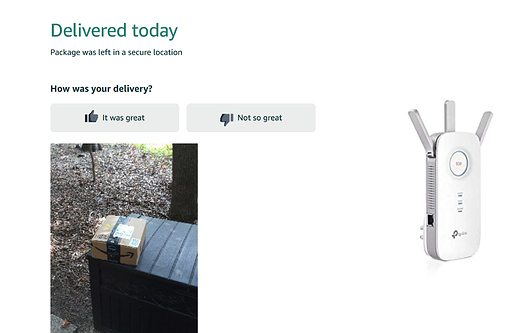 Sheesh. I can't maintain 400 Mbps and my laptop has line of sight to my 5 Ghz "ac" router.