I need another chime for my doorbell, because the one I have isn't audible everywhere I need it to be audible.

I see threads on the Aeotec and Axxess solutions, and I also found (but saw no thread on) Smartenit's solution, and plenty of talk on video doorbells... but I don't think I want to spend that kind of money for a doorbell.

There's also discussion on wired doorbell sensors, but my current doorbell isn't wired and I have no wires (though I think I have a transformer, so maybe the wires are embedded in the walls somewhere).

I wonder if wireless doorbells like the one I have typically use a standard protocol for which I could get a receiver to plug in somewhere? I see mention of 433MHz a lot, but that's just an unregulated frequency and may not be associated with a common protocol. Or maybe I could crack open my current doorbell receiver and try to install a wired sensor inside of it to relay its detection to Hubitat. Has anyone tried that? In which case I probably don't need a dedicated "doorbell sensor" but any switch or voltage sensor that'll fit inside something else's box.

Or if I do have to spend money, I'd at least like what I end up with to be more flexible and more fun than just a doorbell.

One thing I definitely want to retain is a dedicated link between the doorbell and at least one chime, so that I don't have to rely on other things being up and functional, but I would also like to relay the signal via HE for additional chimes and automation.

I have one wired and one wireless doorbell. I'm planning on having a wire run for the second door, but I bought one of these. It's not terribly expensive to have a doorbell wire run, so that's my option. It wires to your existing and connects to HE. Best of both worlds.
Check here for the link. You can usually find one with cheaper shipping. I Just chose the first one I found.

my current doorbell isn't wired and I have no wires (though I think I have a transformer, so maybe the wires are embedded in the walls

So you have a button outside? Pull it off and see if there are wires. That should be pretty straightforward...

I wonder if wireless doorbells like the one I have typically use a standard protocol for which I could get a receiver to plug in somewhere?

You didn't list a brand or model, so it is nearly impossible to guess.

Or maybe I could crack open my current doorbell receiver and try to install a wired sensor inside of it to relay its detection to Hubitat.

Maybe, but again, we would need to know what you have.

I mean, I know my current doorbell is wireless. There's also a transformer built into a wall in the kitchen but those wires don't resurface at the doorbell. They were probably cut back during a remodel, so I'd have to be pretty motivated to try to dig them out and reconnect them.

What I have now is an "IQ America WD-1140-ACEPI", but things like this are only $10-$20 and I'd be ready to throw it out and buy something somebody else had already modified successfully if it came to that. But in all likelihood it would be the same internals and I could just do the same thing to my own one.

Since we're digging into it, here's the PCB. That seems to be 10Vdc coming in on the black and red, and a speaker on the yellow and purple. I'm guessing the chip is just sample storage, but I included it just in case because I can't quite figure out the label. S1 doesn't seem to do anything when I press it. It comes out on the front of the box but recessed like you're not supposed to poke it too often. 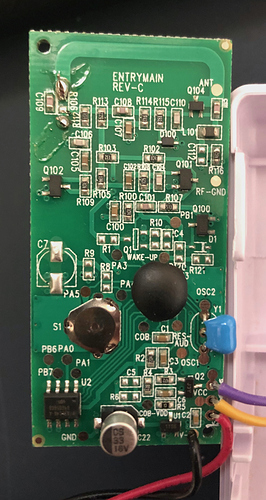 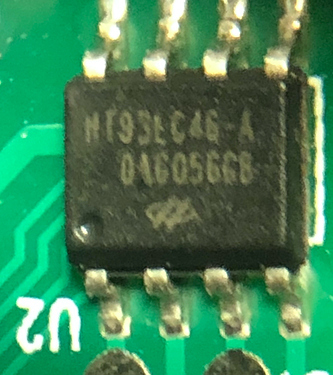 I like the look of those RES-AUD and WAKE-UP test points. Maybe one of them strobes when there's a positive sense. I'll have to clear some space to start poking at it more closely, some time.

Plenty of room in the box to hide an extra PCB.