Can't seem to grasp how to setup a hubitat elevation C-7!

I am new to this whole Smarthome technology revolution. I already had an Asus RT-AC5300 as my whole house (Slow Wifi Speeds And Don't Know Why) wifi router. I purchased a Hubitat Elevation C-7 and been trying my very best to understand how everything interfaces for over 3 days and really need help? Thanks In Advanced!

So a couple quick questions for you.

Again, welcome, and we will try to help you get started.

I watched quite a few videos but not one that helped me.
So far I only have (1) Echo Dot (Zigbee), (1) Echo Show (Zigbee), (1) Lockly Smart Latch (Bluetooth), (1) Schlage Connect Smart Dead Bol(Z-Wave)

I also have about (4) amazon smart plugs.

These, or something else? 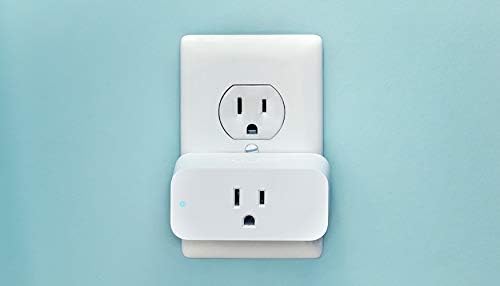 Amazon Smart Plug works with Alexa to add voice control to any outlet.

yes, the kind you're showing.

Hello, I have one more question for you. So can you give us a brief description of what your short term and long term goals are regarding home automation?

Are you planning on adding more devices? What do you have in mind for smart devices that you would like to have? Smart light switches, motion sensors, other?

Maybe describe a scenario or two "I want to turn on the lights when XYZ happens". Both for now, and for the future.

It sounds like I am not answering your question, but there is a reason I am asking this.

I think that @neonturbo has asked a very pertinent question. Your end automation goals will determine the best route forward for you. Right now, the only device you have that can directly be controlled by Hubitat is the Schlage lock.

If your end goals are to have things like timed lights, motion lighting, automation based on doors opening/closing etc., then it will be worth investing in specific types of home automation products that are compatible with Hubitat.

The Alexa devices also can be used with Hubitat, but maybe not the way you think.

You can use the Alexa to talk to, and control devices that are on the Hubitat hub. You can also install a community based app that makes your Alexa devices talk back when something happens or when you want to get feedback. That app is called Echo Speaks.

There may be a couple workarounds for those plugs, but @aaiyar is correct, that the lock is the only directly compatible device.

Oh, ask away! No problems with that at all. I eventually will want to add an AI-MESH system to my present wifi setup along with (2) more smart locks as well as smart lights in all rooms with occupancy sensors and outdoor security cameras if possible.

I have a (haven't opened box yet) Lorex 32 channel 4k NVR with only 2 cameras for now. I guess I need a shopping list of what hardware/software is required to do any of this. My wife & I love Alexa so if possible I would like to utilize the echo show & echo dot that I have now. I would also like my smart system to include my 30x36 shop that directly behind my house.

Echo speaks needs to be installed on the Hubitat?

Easy to include Alexa in your integration... the ability to control HE devices from Alexa is a built-in app you can install in moments. The ability to control Alexa devices from HE is a bit more complex but really useful because you can have Alexa tell you things about your HE environment. It requires the installation of the Echo Speaks app. I have a couple that I use pretty often... one checks for motion on the Arlo cameras on the front porch and lets me know via the Echo on my desk that someone is at the front door. Another checks the temperature in the freezers and if either goes above 15 degrees Alexa lets me know I have an issue. (If the temperature continues to rise a loud audible alarm goes off...)

Echo Speaks is a third party app that would need to be installed for you to control Alexa activity from your HE. My recommendation is that you put that more toward the end of your home automation journey. Installing it is a bit tricky and it would help if you were more familiar with the workings of HE first.

I think there are a couple of things that will help in your journey. As several folks have mentioned it's really good to identify some goals for your home automation system. I think it's also good to map out what home automation hubs will be involved. For instance, the echo devices you mentioned have zigbee hubs in them. So does HE. It can be really confusing if some devices are controlled via the Alexa zigbee hub and some via the HE zigbee hub. In your case I would settle on the HE as your zigbee hub and disable the ones in Alexa unless there is an explicit reason to leave them on. There are a couple of use cases where separate hubs are a good idea, but figure out if you need them first. Otherwise you'll have devices all over the place and managing them will become a real pain.

I would definitely spend some time reading the Hubitat articles on creating solid meshed networks. Most folks end up with a combination of zigbee and zwave devices and it's good to understand how they function before going too far down the home automation path. Wifi can also play a role, but I think you will find zigbee and zwave devices much easier to deal with in the long term. If you gain an understanding of the principles and limitations now, it will be a lot easier as you start adding devices.

A couple of things I learned along the way...

Make sure your HE's IP address is static. This is usually something you set within your router.

Integrations and automations that rely on cloud services come with a price both in reliability and in performance. It's fine to use them (Alexa integrations are by definition cloud-based) but use them knowing the issues.

It generally tends to be easier long term to rely on automated switches rather than smart bulbs, where possible. If you do end up using smart bulbs, that's one place where a separate hub just for the bulbs (like the Philips Hue hub) starts to make sense.

Check out Blue Iris as well...

Innovative Video Management Software (VMS) to record up to 64 cameras, both IP and analog. Keep an eye on your home, place of business & valuables.

again to repeat what @brad5 said - start simply and work your way up once familiar with things.

Is Asus RT-AC5300 still a good router? can I use it within my meshed network?

This stuff can be very confusing at first. There are terms like "mesh" that can mean lots of different things depending on the context, and there are so many choices and options it can be a little daunting. Stick with it, take it slow, and it will all make sense eventually.

Your Asus router should continue to function just as it has today. If you want to extend your wifi network and create a meshed wifi network the Asus has that capability.

Now let's set that aside and get wifi out of our brains for a bit. Your wifi network is really a separate topic and does not have all that much to do with how your HE functions. It is not a wifi device and all it needs is to be plugged into one of your router's available ethernet ports. Most (but not all) home automation devices do not use your wifi network. When we talk of a "mesh network" in the HE context we generally mean your Zigbee or zwave networks, not your wifi network and not your Asus router. Your router plays no role in the Zigbee or zwave networks.

I think from perusing the list of your devices others determined that the only one that can be directly controlled by your HE is your lock, and I would not recommend starting your experimentation with your lock. Pick something a little less critical. Consider buying a couple of Zigbee or zwave devices that are on the Hubitat compatibility list and set them up so you get the feel of how it all works. Maybe a smart plug or two and a motion sensor or a door contact sensor. Or maybe replace those Amazon plugs with a couple of Zigbee smart plugs instead. Set them up somewhere that is not critical and play with them for a while. Figure out how to add them to the network, set up a couple of simple automatons, and see how they all function. Once you've got the idea then start thinking about implementing your grand design