Hey all - the receiver I have hooked up to my TV is ancient, so I am considering replacing it. I saw that Denon has HEOS and that HE has integration, so I am now considering it. Anyone with experience have suggestions? I'd like a receiver that does at least surround sound + integration (e.g. use HE to speak, pause/skip/other simple stuff.

What are some of you using that integrates well with either Hubitat directly or with Alexa?

Your budget will probably dictate what your options are more than anything else.

I like Marantz, their receivers work well with @dman2306’s HEOS integration since they have the same parent company as Denon.

I use a Yamaha Receiver and have had good luck with it. I use a Harmony Hub with remote for automation.

Awesome - how's the integration with Hubitat for the Yamaha? Is it ready to go or do you have to get custom drivers, spend time just to get it to work etc?

Also, what all have you done with it? Speaking notifications? Simple control like turn volume up and down? What happens if you speak a notification while a movie is playing?

I don't use the Hubitat integration. All my entertainment equipment is controlled by the Harmony Hub which does have a Hubitat integration. I set up a scene that turns on the TV, RX, and a couple lights. I set up an Alexa routine that turns on the scene. From there I use the Harmony Remote to control everything. It is a lot easier to use the remote for control than voice. IMHO. I just use Alexa to turn the stuff on and off.

I just hooked up my new Denon receiver and when I went to load the HEOS app on my phone there were nothing but horrible reviews and most said it almost never works. As such I decided to avoid HEOS and like David I plan to do everything thru Harmony Hub which I already have working thru Alexa. Good luck with what ever route you go.

I'm personally fond of Yamaha receivers. They seem to have a good balance of quality, features, and ease of use. Like David, I am using Harmony Hubs to control the 2 that I am using. The one in the bedroom is new enough to use the Hubitat integration, but I'm just sticking with the Harmony integration because I had it first and it also controls the TV and other devices.

For spoken notifications, I have multiple Alexa devices around the house so I have no need for that functionality in a receiver. I could have Alexa control my Harmony Hubs as well but would rather use the remote or my phone.

If integration with Hubitat is important, I would favor a receiver that can send and receive commands/status updates via Telnet or another network interface.

Harmony is great, but like any IR-based solution to control other devices, there is no confirmation the command was received, and no updates in device status if something is changed through another interface.

For example, even ignoring the community-developed HEOS app for a moment, with HE’s built-in Denon/Marantz driver I have control over basic receiver functions, with a confirmation the command was actually received, and the receiver will also update Hubitat if someone changes an input, volume level, etc by asking Alexa or using a physical remote.

I use a Denon AVR2113; it's 9 years old. The HE Denon integration allows for power, volume and source control, however I rely on my harmony hub for control as many others have suggested.

I have a Chromecast plugged into one of my AVR sources, which i use for HE speaking. Normally i have speech from my google home for HE automations; the AVR is used only for speaking very loudly to scare burglars....or me, if I forget to turn the alarm off.

I'm not very excited about getting another device (Harmony hub) to begin with, much less that I would have to line it up with the receive and make sure the kids don't block/move it.

The build in Denon or the community-developed HEOS sounds tempting. It sounds like you have a Denon using the built-in driver. Can you do all the basic functions like speak notifications, pause, hit next, adjust volume? Also, what happens when you are watching a movie and HE integration speaks a notification?

It comes with 2 extra IR blasters you can position independently. There is also an additional IR port to which you can plug an additional blaster (or more if you get splitters - and which don't need to be the harmony ones)

I'm not very excited about getting another device (Harmony hub) to begin with, much less that I would have to line it up with the receive and make sure the kids don't block/move it. The build in Denon or the community-developed HEOS sounds tempting. It sounds like you have a Denon using the built-in driver. Can you do all the basic functions like speak notifications, pause, hit next, adjust volume? Also, what happens when you are watching a movie and HE integration speaks a notification?

The Harmony has 2 jacks for a small remoteIR blaster. You can hide the hub behind your equipment and stick the blaster near the IR receiver(s). I have one taped to the bottom of the shelf above my radio, shooting down. Works well. 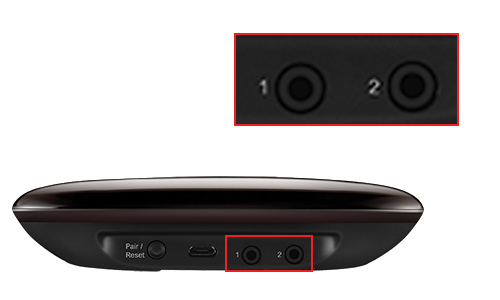 If your equipment has an input jack for an IR Receiver, I believe you can plug a jack directly from the Harmony hub directly into the device.

It sounds like you have a Denon using the built-in driver. Can you do all the basic functions like speak notifications, pause, hit next, adjust volume?

I have a Marantz receiver, but as I mentioned they’re a sister company of Denon so the receiver software is the same for both brands at this point. I make use of both the built-in driver and the HEOS integration to accomplish various tasks.

The built-in driver can do things like volume and change inputs, because those are commands that the receiver actually acts on.

Pausing or skipping to the next song is a function of the source, not the receiver itself. If you’re using HEOS to stream, then the HEOS integration can do both. If you’re listening to a CD or vinyl, there’s no app for that, AFAIK. Although you could use a Harmony remote for cases like that, which also has a community-developed integration.

As for speech notifications, I’m not sure how that would be done with most receivers, unless you had something capable of TTS plugged into an input on your receiver. But then you’d have to automate a process to switch to that input, allow the notification to finish, and switch back to whatever you were listening to.

Speech notifications are generally much easier to accomplish on a smart speaker like Amazon Echo or Google Home, or Sonos speakers. I could be wrong but I don’t think TTS is something HEOS supports at all; if it did then it’d probably be possible to get it to work with Hubitat.

I would have to line it up with the receive and make sure the kids don't block/move it.

As others note you can add blasters if you need to...my primary hub is in the family room entetainment center...it bounces it's signal off a wall 20' away on the opposite side of the room and back to the devices in the entertainment center (TV/receiver/BluRay player, Roku, Shield, etc.) and never drops a stitch.

People can be standing/walking around in front of the TV when I press a button on the remote and it works w/out issue. Not having to point a remote any more is so nice...you can have it in your pocket and press buttons and commands are sent. Older versions of Hamony remotes (no hub) could get out of sync since they relied on pointing the remote at the devices while pressing sending commands. The Harmony hub removes that requirement. I've had two hubs for years and I cannot remember either of them ever getting out of sync. I've got the Harmony connected to GH and can use voice commands if desired. It's worked so well that I've never even set up the HE integration.

TBH I personally don't get the obsession to automate everything in sight. For me first and foremost in an AV receiver is sound quality/number of inputs/preferably networked with Spotify at minimum, atmos etc...... If there is an integration that's a bonus.

Fortunately mine works with HE but the only thing I'm using it for is to detect when it's turned on so that I can activate exhaust fans to keep it cool in its enclosed cabinet.

That said I've always had harmony remotes and the best part is that when I upgraded to the hub all my activities got moved across as well.

TBH I personally don't get the obsession to automate everything in sight. For me first and foremost in an AV receiver is sound quality/number of inputs/preferably networked with Spotify at minimum, atmos etc...... If there is an integration that's a bonus.

I think that's a great point. I chose my current Marantz receiver primarily because it met my needs for the home theater I wanted in the basement of our new house. It does 7.2.4, uses the more advanced Audyssey MultEQ XT32 room correction software (the space was definitely not designed with accurate reproduction of surround sound in mind

), can support HDMI 2.1 features, maybe a couple other things.

The ability to integrate with Hubitat is indeed a great bonus, but it's at the end of the list of receiver must-haves for me as well.

Sure - but my super old receiver has great sound quality, it just doesn't support some more modern features like auto on or any newer hdmi specs. If I'm going to replace I will want at least those 2 plus the ability to integrate into HE

My 2 cents about the Harmony Hub. Of all the things talked about so far this is really the only one that does most everything people were asking about in one device. It can turn all the devices on / off, set volume, change channels, inputs on the TV, control the Blue-ray etc. Etc. HEOS and the HE driver from what I see so far are mainly for the receiver so you would have to find other ways to do the rest. The Harmony Hub also allows me to do all this via voice thru Alexa with the supplied Alexa Harmony skill. Sure it may not give me confirmation of everything but if it didn't do what I asked I would know it pretty quick :).

I get people like it, I just am not interested in all that. I'm really only interested in speaking messages on it (assuming Harmony can't do that), and pause/play current playlist, and adjusting volume.

As in Text to Speech? I was not aware really any receiver can do this, please correct me if I am wrong. I think you would have to get a connected speaker like Sonos or GH or Echo device and then use those services for TTS. With Echo devices, you can 3.5mm out to your receiver/speakers and switch the input, do the TTS, and then go back or something like that, but that would be relatively complex.

IMO Harmony is great because it is half decent right out of the box without a lot of effort and with the community app it only gets more powerful.