I had a Kwikset lock on my front door and this RM was set up as that worked.

What I want to see happen is,

Event: when door unlocks with code
Action: if time is between X and Y then turn on lights.

I know i'm missing something or adding something I don't need but after trying several different ways I thought the rule should be written, i'm at a lost

I do have an Alfred DB2-B. I moved from a Schlage a couple months ago.

Your first rule looks promising. If you trigger from a lock code detected and that the only way that your rm can trigger then you don’t need to retest for it in your IF statement.

Also, when the lock code detected triggers your front door may not be actually opened yet. It would be better to trigger off the contact sensor. The bad thing about doing that is that the last lock code detected does not get automatic cleared so it will always have one of your values.

I've done some more updating and I'm at a loss and frustrated, can ANYONE help me figure this out, I'm hoping more of you guys can reply so I don't have to waste my time emailing support just for them to point me back to the forum.

With my Kwikset, this was my rule and it worked like a charm because unlike the Alfred lock, I didn't have to unlock it when leaving out the house. 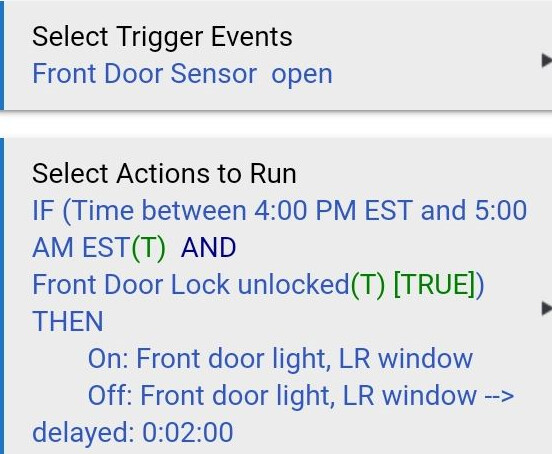 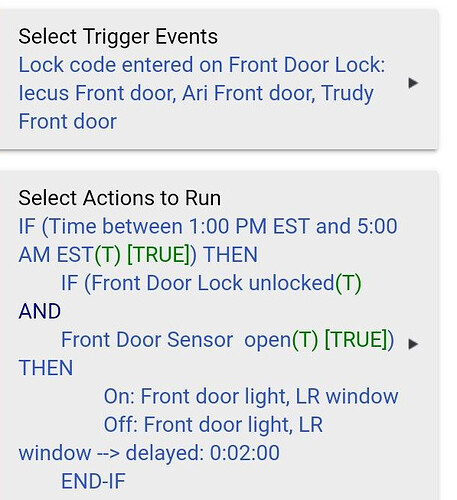 I removed everyone and left myself, thinking I needed to create a rule for each user, but this failed also 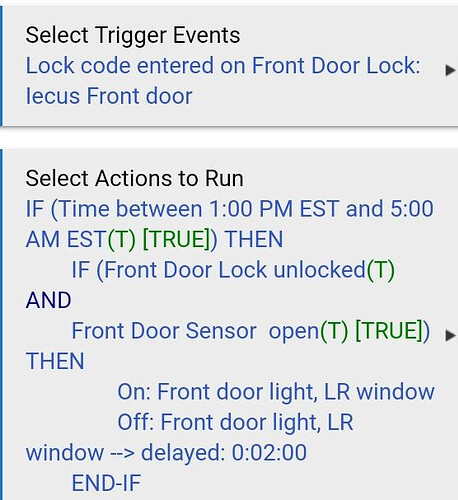 Side note, I also notice my notifications aren't working anymore and they were when I had my Kwikset lock. 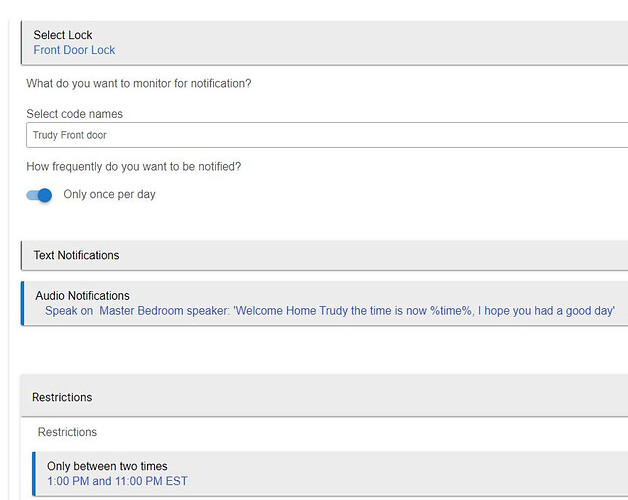 I’m no RM whiz but I do have an Alfred lock so your post caught my eye. Have you tried using the contact sensor as the trigger? I’m not able to test it out right now but visually it would look something like this:

ACTIONS:
IF last event device is lock code AND time of day is between 1p-5a
THEN
Light on
Light Off - delayed 2 min
END IF

That rule will just cause the lights to come on every time the door is open, so if i'm going out, it will still turn on, but I think the issue is coming from the Lock code manager, there's no logs, events or anything showing up in mine and I have 3 door locks linked to it, there should be some type of data.

I knew your rule would cause that effect but I tried it anyway and confirmed it did just that, but I only want the lights to come on once I'm coming in and not when I'm leaving out

I just looked at my logs and see now that the Alfred Lock doesn’t note who or how the door was unlocked. I’m stumped then short of using a motion sensor on the keypad side of the door to validate it’s opening from the outside.

I notice alfred shows unlocked "physical" and I'm wondering why it shows that when it's auto lock after 30 sec, I can understand physical lock sometimes if someone didn't wait the 30 sec and just locked it behind them.

If you have a contact sensor on the screen door that will work. Just tried it out and it worked for me.

TRIGGER: Door is unlocked
ACTIONS If screen door sensor is open then turn on lamp
Turn off lamp delayed 2 min
End if

Thanks for testing, but it will turn on when leaving out as well. Once I unlock the Alfred from the inside and open and then the screen door, that rule will be triggered as I'm leaving out. If there was a way to say it has to be in a 1,2,3 order then it would work perfectly.

Alfred Lock doesn’t note who or how the door was unlocked.

I disagree. I have the DB2-2 and this rule operates fine.

That next rule down the line applies a time restriction.

Also I set a VS indicating a lock code has been detected that triggers other RMs and gets cleared by then. 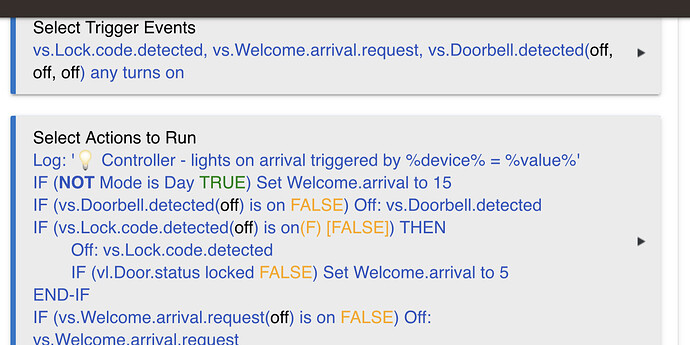 This turns on my outside lights when the mode is not day by incrementing my welcome.lights time to 15

And the following says welcomes my wife home only when she comes home from work. 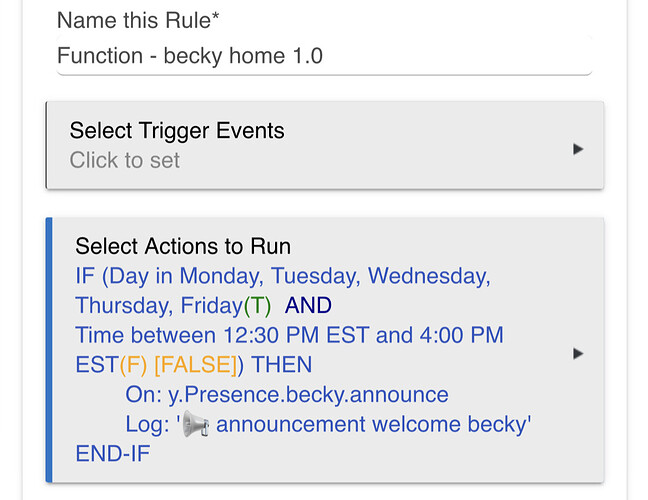 Can you share the steps to set this up. 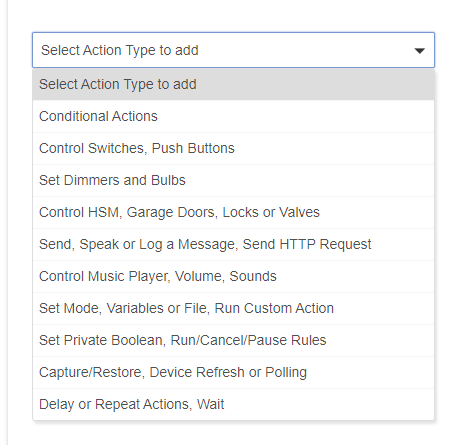 No I should have given more details.

Detected.lock.code is a RM global variable set up as a String.

Then that variable can be referenced in any other RM by using %Detected.lock.code%