I've used a Waxmax LeakSmart water valve (v1) since sometime in 2015. About a week ago, I had water leak which resulted in the water valve being shut. When I resolved the leak, I was unable to open the valve using Hubitat, or even using the open/close buttons directly on the valve controller.

When I tried to open the valve (via Hubitat or the physical buttons), I could hear the motor grind horribly, so I decided to open it up just to see what it was going on. The LeakSmart has a controller that slides onto a motor assembly, which in turn is bolted on to the brass valve body. The motor assembly comes off with four screws.

The motor is a low-speed, high-torque, DC motor connected a circular nylon gear that rotates to move a nylon gear on the valve body to control the ball valve. Anyway, a single tooth had partly broken off on the circular nylon gear, so it would engage to close the valve, but not open it. And obviously this happened after 5+ years of use, so that's not bad for wear and tear. 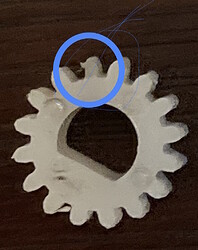 I called LeakSmart tech support to see if I could purchase that little gear and what the part number was, The guy I spoke with (Keith) was super-professional; he knew what I was talking about in less than a minute. He said they'd be happy to ship me a entire new motor assembly for free.

And, less than a week later, I received it.

I'm just hugely impressed by the quality of Waxman's support. I sent Keith a note of thanks after receiving the package and in his reply (below) he asked me to put a good review out there somewhere.

So this post is exactly that - first off, that valve worked flawlessly for 5+ years (maybe even 6 years). Either way, it was clearly out of warranty, so I think that Waxman's sending out a replacement part for free after all these years is incredible.

Anyone considering the purchase of a Hubitat-controllable main water valve should include the Waxman in their consideration. My experience with them has been excellent!

Stories like this is always is nice to hear about. A lot of companies doesn’t seem to care about customer support which to me, is one of the biggest mistake they can do. Not only will a company with good customer support get a returning customer, they also gets free advertising (like your post) which has a lot more value then a internet ad.

I've likewise been using their valve for about that long. I had an issue a few years back and got the same great service and support.

Takeaway, they've been providing great service for an extended period of time.

I have the same valve installed for several years as well. Maybe 2015, I don't remember. Glad to hear about this.