I'm in a bit of a dilema. My latest project is Zigbee based (im used to zwave) and it's a large house with lots of zb motion detectors , contact sensors,and smoke detectors ... yes it's basically a security system with some automation only.

I planned to use zb plugs to act as repeaters and spread them around the house to establish a good mesh network. But i realized, during power blackouts, the whole network will break and since this is a SECURITY system, that's not acceptable. The whole system must stay powered for a while even during brief interruptions.

So now i'm concerned and need to find a reliable solution.

Just make sure you're very clear with your client that this is not a proper security system.

It is a home automation system being used for security functions. As such it will never ever be as reliable as a dedicated security panel.

I'm not saying you can't or shouldn't do it, but you 100% need to be aware of the limitations of this approach in terms of reliability.

That said, the best I can think of is a few wall plugs plugged into small ups's. I don't know of any stand alone zigbee repeaters with backup battery.

Even security systems like ring would fail in this scenario. I guess some could fall back to the Hubitat node if it were on a UPS. I think you could have it trigger your sirens in case it an outage

I have a Ring security system. The unit has a built-in backup battery and cellular backup when the wifi is down. Its mains powered repeaters also have a battery backup, and the security devices (locks and sensors) are all battery powered. I have had the system for a few years now and never had to change a battery yet.

Security systems should have built-in redundancies that Hubitat doesn’t as it is not sold as a security system. That said, Hubitat is much, much more capable than Ring when it comes to home automation. Ring / Alexa can be used to do some very basic home automations, whereas the sky’s the limit with Hubitat!

For me, having both is the right solution. I feel that I have a good enough security system with Ring, and a really great home automation system with Hubitat. I find that both work together and complement each other very well.

If you want your Zigbee repeaters not to fail with a power failure, you could always put them on a UPS, or purchase USB dongle Tuya repeaters (they have them on AliExpress - I have lots of them and they work great!). The repeaters could be put on a USB battery backup device. It would not look as good and would be much more expensive, but would provide some level of backup.

Remember however that if Wifi fails, the owner would not be notified of an event unless they have some sort of cellular backup for their Wifi as well.

Again, I'm not saying that you can't use a home automation system as a makeshift security system. I'm all for grown-ups making their own mind up on things.

I just encourage those doing so to really understand that it won't be as reliable. If they're okay with that, and still think it will be reliable enough for their needs, that is their decision.

So now i'm concerned and need to find a reliable solution.

Then get a real security system.

There are USB zigbee routers/repeaters that can run on 5VDC backup power, but you’ll have to assemble the package yourself, including designing a suitable enclosure etc.

Thank you all for the responses

BTW
can hubitat be used as a repeater as well? perhaps i can install hubitat in another part of the haus.

First the obligatory "HE is not a security system" comment. Despite the fact that it works, there are too many variables in the performance of HE for it to serve as a mission critical security system (eg hub crash, need for backup power on your hub and network).

Down to your points :

can hubitat be used as a repeater

No, but you can use hub mesh to expose devices on one hub to another.

perhaps i can install hubitat in another part of the haus.

Yes (using hub mesh). Presumably you have wired ethernet and backup power to the other part otherwise you would need wifi and then have to worry about maintaining power to that as well as your access point(s).

but can ZB dongles work as well? like these 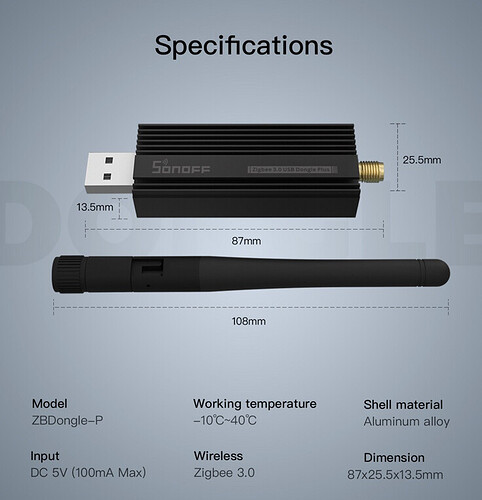 Will these automatically act as repeaters just as good? I ask coz i can get these easier around my area than the TUYA repeater

Just make sure you're very clear with your client that this is not a proper security system.

This. Even if this is a project being done on behalf of a friend or relative (OP didn’t specify). Earlier this year they added a disclaimer to the Hubitat Safety Monitor app configuration page to try to make that clearer to users. 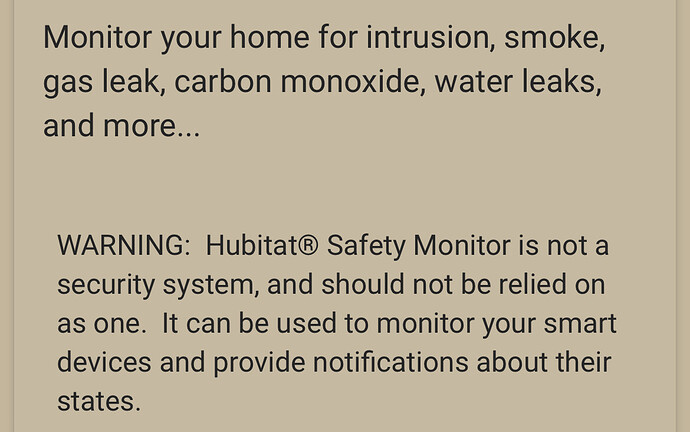 If I was expecting a security system from an installer, and then I came to find out this disclaimer exists but wasn’t disclosed ahead of time, I would be pretty PO’ed.

Would a repeater even act as a repeater if it had fallen back to battery power? It would have to be on a UPS that behaved like mains electricity.

There is a UL standard 681 that defines the characteristics and certifications of security systems. Many of the attributes of the standard refer back to heath and access of the system. You may remember that the first Nest systems were UL listed for using a UL monitoring station but the system itself wasn't UL certified until a later version.

One of the attributes is access to system's arming and disarming mechanisms, and there is a reason why Vista and SimpliSafe don't provide API access the "certification" would be nullified due to the access path is no longer under strict hardware access methods.

Those warning that HE is not a proper security system are spot on.

Here's some info about reliability of devices that act as repeaters and have battery backup. In this case it's my Ring Extender story (Z-wave, not Zigbee, of course, but it illustrates a limitation to think about).

We live in a rural area of Maine. Things like tree limbs sometimes play havoc with the grid power when a storm is blowing through, causing the electricity to go through rapid on-off cycles. I have three Ring extenders that I use primarily as power outage alert devices, to warn me that the power is out or has been restored in each building on our property (i.e., did the backup generator kick in, and did the transfer switch at each building do its job?). When the grid goes through those rapid power cycles, at least one of those three Ring extenders has ~ 30% probability of locking up and not properly reporting its status ("mains" vs. "battery"). I've no idea as to whether it is still repeating as that's not their main purpose. But I sure as heck wouldn't want to trust them as part of a security system! A manual unlpug/replug restores things, but those devices can definitely lock up, at least to the point they don't correctly report their status. Never happens with our "real" security system - the one we rely on to act like a security system because that's what it is.

Yes, you will need to flash the appropriate firmware for it to act as a router Creating a Sonoff Zigbee Router (Router Firmware) - YouTube

There are 2 versions of the dongle - P and E. The E version was only recently released but the P version is well supported. The only issue is that you probably need to use a cable to plug it into the battery pack as it's going to be quite unwieldy when plugged in directly.

It would have to be on a UPS that behaved like mains electricity.

The one I linked to has been discussed to death on this thread DIY- Battery Backup Hubitat- under TEN bucks-NO soldering. And yes my Tuyas still work fine if you disconnect power due to the way these are designed and the repeaters don't draw enough current to pose an issue, with the only exception being if the power outage is long enough to completely deplete the battery then when power comes on there may not be enough to charge and power the device simultaneously. That said these repeaters draw so little power that in my area this does not pose an issue.

Thanks for the advise. I actually advised and let my client choose and he is fully aware of the difference between our standard 433mhz dedicated alarm systems and hubitat. After explaining how the tech works, he chose hubitat for various reasons such as configurability. So it is my job now to design the system best i can. One of my considerations for this is to have redundant repeaters in the network just to make sure connectivity is good - expecting that we already have a good zw/zb repeaters with built in backup power already by now.. it's 2022!

Although I've to admit I didnt know about this disclaimer was in hubitat. I'd be sure to show it to him,.

THanks again for the advise

I think it’s always been the staff’s publicly stated position, for all the reasons mentioned above. But it was added into the app page itself only a few months ago IIRC.

Since it sounds like you’ve kept your client appropriately informed, ultimately it’s their call re: what to prioritize

There’s an issue here. Many zigbee devices stick to the repeater they pick initially. So I’m sure that redundancy is as important as picking high quality repeaters.

For indoors, I recommend the Tuya USB repeaters that @rocketwiz linked to.

For indoors, I recommend the Tuya USB repeaters that @rocketwiz linked to.

I second that. I have quite a few of these around the house and they’ve been very good to me!

Question..... are zigbee repeters like what ROcketWiz recommended better than using zigbee plugs (w/c are natively repeaters themselves) in terms of range and relay capabilities?

I ask because I can get Zigbee plugs around here easier. Then for my power backup, i realized that the IP CAMERA System we will install will have IDFs around the property that are powered from the server's UPS .. So it wont be difficult for me to use ZB plug as repeater, ill just have then plugged on our surveillance power line (that are, again, centralized directly to the server with UPS)

Zigbee plugs will work fine as repeaters in your case although if you have xiaomi sensors you will need to check the forums or do some testing as there can be compatibility issues (I can only confirm they won't with the old smartthings plugs).