Room Lights supports Zigbee Group Messaging (ZGM). This allows multiple Zigbee lights to activated by a single command on the Zigbee network. Doing so both cuts down on network traffic, but also causes the lights to respond all at the same instant.

There are a couple of things to note: These devices commanded according to how the Activator Device is commanded comprise a group. Such a group may also include non-Zigbee devices, and these are activated one at a time just as the ZGM devices are activated all at once. It is only in this context of a group of devices that ZGM makes sense. There is no other context where ZGM will work. Specifically, when there are different settings to be established for the various devices (a scene), ZGM won't make sense as ZGM causes the exact same command to be sent to all of the commanded devices.

There was a mistake made in the initial implementation of Room Lights with respect to when ZGM is enabled. Specifically, ZGM was treated as an opt-out option, and whenever there was both an Activation Device and multiple Zigbee devices, ZGM was set up. This would cause Scenes to not work as expected, since ZGM doesn't support different activation values. Consequently, to correct this mistake, ZGM has been converted to an opt-in option. When a Group-2.1 app is imported into Room Lighting, ZGM will be used if it was selected in the Group-2.1 app, and not otherwise. When a Scene-1.2 app is imported to Room Lighting, ZGM will not be enabled.

Notice: If you have been using ZGM intentionally, you must open the Room Lights app after updating to 2.3.3 and select the new option to affirmatively choose ZGM. ZGM will be deselected when the app is opened. If you never intended to used ZGM and had a scene not activated as expected, this might be the cause. In this case, simply opening the Room Lights app will disable ZGM.

Just updated to beta, and tried to access any of my Group-2.1 groups, but they all take me to blank page (Scene-1.2 access still works though)... Anyone else seeing that for Group-2.1 stuff?

Hmmm. that's odd, and I can reproduce it. Will get it sorted out.

Found the problem. Fix in next release.

This is how i thought it would work but it doesn't, as soon as i added a motion sensor for example it removed the ZigBee groups. Has this been fixed?

I thought the idea was to combine groups and motion lighting so my thinking was create my RL as my motion lighting but when I controlled the device all the lights would turn on and off via the group. That way it would always be active when the motion is and a OFF would work, how ever its not (unless now fixed).

I can't tell what you're talking about unless you provide the context with screenshots.

Has this been fixed?

Has what been fixed?

Has what been fixed?

that if you have more than just a activation device it no longer removes the ZigBee groups. 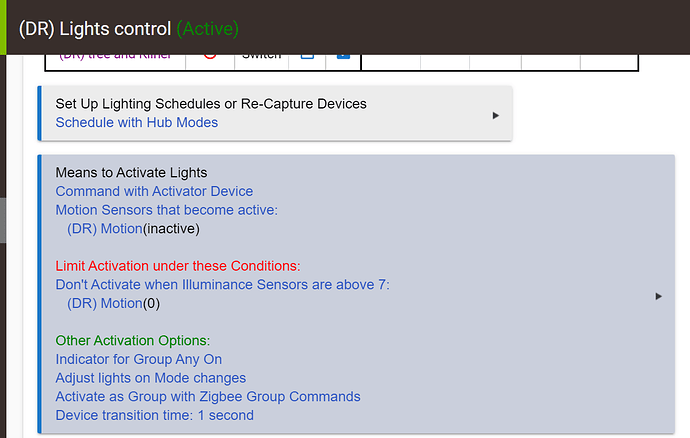 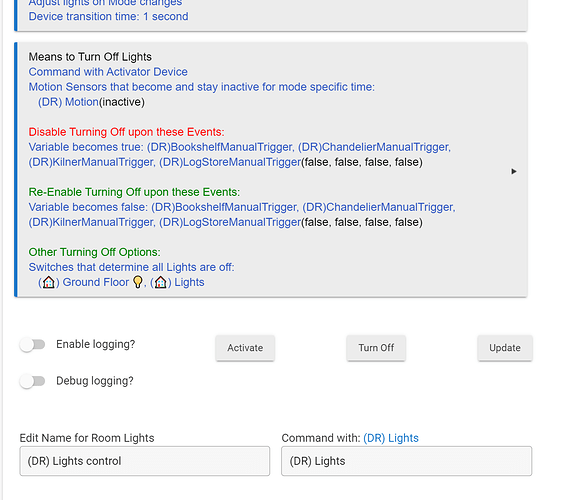 that if you have more than just a activation device it doesn't remove the ZigBee groups.

You make the most obscure posts ever.

I don't understand what you're talking about. You have the option selected to "Activate as Group with Zigbee Group Commands". You also have an Activator Device. Those are the two things that enable Zigbee Group Messaging. Why would it remove the Zigbee groups in that case?

Why would it remove the Zigbee groups in that case?

I'm saying why would it but it does. Hence bug.

You asked what I was asking had been fixed, hence the reply.

Edited above as grammar was confusing.

I cannot reproduce this. I have a group, and it has ZGM enabled. I add a motion sensor to Means to Activate, still have the ZGM map. Did you hit Update?

Did you hit Update?

Yeah tried that, no dice.

Will do this in the morning

And, show a screenshot of the Device table.

Are Chandelier, Kilner and Stairs all Zigbee? Remember, a group will want to set all devices the same way, so presumably you're only using on for the Activator Device. The motion sensor, when that is the means of turning them on, would not use ZGM. If you hit update on this, is there anything in state for zigbeeMap ?

is zigbee but on another hub.

Kilner and Stairs all Zigbee?

Remember, a group will want to set all devices the same way, so presumably you're only using on for the Activator Device.

for the group i mostly just want the off from the activation device but yes.

he motion sensor, when that is the means of turning them on, would not use ZGM.

yes that's what I would expect as some modes I don't want them all on.

If you hit update on this, is there anything in state for zigbeeMap ?

So all you could expect to be in a ZGM group are Kilner and Stairs. I don't know why they don't show up. Are they treated exactly the same as to on/off in every mode? If not, they wouldn't be in a group. Remember, Group-2.1 had identical treatment of every device with no concept of modes, or any other means to set them.

So all you could expect to be in a ZGM group are Kilner and Stairs.

Are they treated exactly the same as to on/off in every mode?

No I'm almost creating a scene per mode.

Remember, Group-2.1 had identical treatment of every device with no concept of modes, or any other means to set them.

yes but I thought the idea was due to the complex nature of the app the only way to use a group is to "group" all lights that are in the app but only use the group when the activator device is actually used?

No I'm almost creating a scene per mode.

So why would you expect it to behave as a group? It's not setup as one. The group has to have the same members for all modes. So, for example, if one bulb is not turned on and off in every mode, it couldn't very well be a member of the group.

So why would you expect it to behave as a group?

You have made some changes now, so this is fully how I expected / hope it to works. As it's worth a update.

If within the app and means to activate (possibly depending on mode) ALL ZigBee devices are down to do the same thing I would expect the group to be used for efficiency.

However if they are not then normal control would happen.

If within the app, whenever ALL ZigBee device are selected to turn off (possible depending on mode) and a means to turn off are selected, then again a ZigBee group would be utilized.

This way there is no dynamic chopping and changes of ZigBee groups as it would make it far to complicated and likely slow.