Hi all. Back when I had hair, a belt size in the low 30s, and dinosaurs roamed the earth, the X10 folks made a battery-powered tabletop remote that was uber-handy for controlling things like lamps. I would love to have four or five of something similar that work with my HE hub for controlling z-wave devices, if anyone has a recommendation for the modern, z-wave equivalent. The device was about the size of a smartphone but perhaps 3/4" thick, with about 8 on/off buttons and, as I recall, maybe even a dimmer rocker (that might have been on the "deluxe" version). You could just push a button and the associated light went on or off, which seems to be a very basic function we've forgotten about in the age of Alexa and Google.

BTW, I know I can (and do) handle these things with a tablet, or my phone, or via Alexa, etc. But sometimes it's nice to just touch a specific button on a dedicated, simple device without going to a screen, to do things like turn a lamp on or off. So, recommendations welcome and appreciated, if anyone knows of the modern equivalent.

BTW, for benefit of our younger members (say, under 40) X10 was a signaling standard, the equivalent of papyrus or the steam engine compared to today's home automation standards like z-wave or zigbee. It was the the thing we used "back in the day", that got old codgers like me into HA. It had fun "features" like having your buddy next door also decide to get into home automation, at which point you could do things like turn each others's lights on and off at 2 AM, until you negotiated which of you would use which "code banks" ("You take A-D, Bob, and I'll take (E-H). But we can't let Phil across the street get into this stuff, or we'll run out of codes"). Those were surprisingly fun days, looking back on them, but it's amazing that the same problems generally still exist (e.g., "I can't get this one device, at the far end of the house, to work reliably..."). Anyway, recommendations on a modern, small, battery-powered, z-wave pushbutton controller appreciated, and thanks in advance.

Have a look at the remotec zrc-90

Does it have to be Z-Wave? I use the Phillips Hue 4 button dimmer switch, which allows you to use the 4 buttons for a number of different things. Plus they're quite cheap.

Lutron Caseta Pico Remotes (~$15) make excellent 'Button Controller' devices for Hubitat. They also have a 10 year battery life and 'just work', every time. They do require a Lutron SmartBridge Pro ( L-BDGPRO2-WH) for integration with Hubitat, but if you're buying many Button Controller devices, the Picos are pretty inexpensive compared to alternatives, and thus the savings on the remotes can often offset the cost of the SmartBridge Pro. 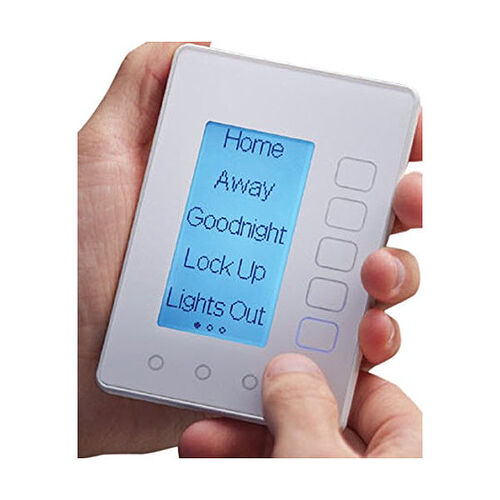 Aeotec minimotes - 4 buttons, but you get 8 actions out of them.

If you’re interested, I have two used and one brand new (in the box). Yours for the price of shipping and a six-pack of the IPA of your choice (or any other hoppy ale).

I have boxed up all my X10 a long time ago. I still remember having the x10 remotes and this LCD controls with my StarGate. I am using SmartThings buttons now but looks like they are also in short supply with the Aeotech guys taking over the hardware line from Samsung. 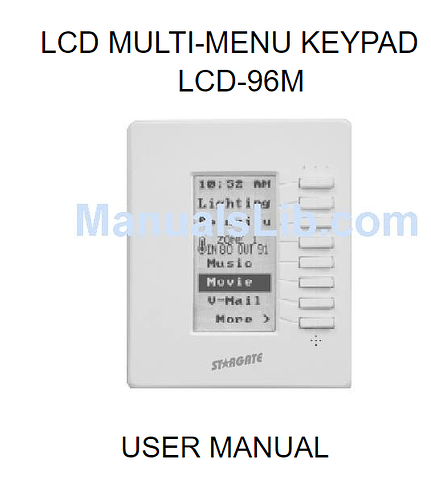 Yep. I searched for years for an equivalent device when I retired my x10 stuff and moved to z-wave. GE (Jasco) made a battery powered remote, actually a few different models, but they were crap and they've long been discontinued. If you see any around on ebay, steer clear of them. I also tried some smaller remote from Aeotec a while back but that didn't work very well either.

Some people use Picos but they're not really the same. Brian mentioned the Nexia which is probably the closest to the X10 remote, if you don't mind spending $100.

But if you're looking for a low cost simple device with some buttons like the X10 remote, good luck. I gave up and we just use voice commands. We've got echo devices in almost every room and they pretty much eliminate the need for physical remotes. Resistance is futile.

There are still those ZigBee "Cube's" that you can use as a remote. I played around with them and the wife couldn't master so I abandoned the project. But the theory was good. Each surface issued a different event that you can use in rules machine or other. I even labeled the cube and enabled some of the advanced options like tap and rotate.

The Nexia NX 1000 is expensive, but 1) it works well, and 2) gives you 15 buttons with configurable button descriptions (a bit less than $7/button). It gets difficult for those int the household who didn't design the system to remember the multiple up and down clicks on some alternative devices.

There are still those ZigBee "Cube's" that you can use as a remote. I played around with them and the wife couldn't master so I abandoned the project.

Yikes. Can't imagine a more non-intuitive interface. Could cause serious havoc if it fell on the floor and rolled around. And being a cube, the pointy edges could hurt when the wife threw it at you.

My wife is amazingly tolerant and often receptive to the geeky things I attempt around here, but if I tried to get her to use this I would definitely get "the look". And we all know what that means

I feel your pain.

I do miss this, I had it working with the IR Expander of the StarGate, X10, Phones, and the WebExpander, mapped out all sorts of cool things but the only downfall was wiring up of the IR receivers in the rooms where I had one. Oh and this is the only "Phillips" device I have ever had, please don't tell Paul HIbbert. By the way this is probably the last unopened Pronto remote in the world and it's the centerpiece of my dead technology museum. 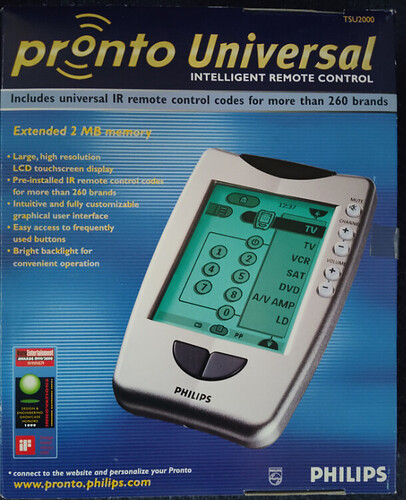 Thanks for the ideas and suggestions, everyone. It is surprising (to me, anyway) that no mfr sees a market for a simple, easily configurable, push-button remote (at a reasonable price). But then again much of the world wants glitz and dancing unicorns. I use basically three buttons on our microwave, and that includes the one that opens the door and the cancel button. Anyway...

@aaiyar, I will contact you directly but I'm happy to do a bit better than a single six-pack and shipping for those Aeotec remotes, which sound like the best idea possible for my needs. Thank you!

The Nexia looks promising as well, but perhaps more than I really need for my purposes (which largely involve turning off some lamps with a single push of a button or two, instead of telling Alexa to do it). I've used Lutron Pico remotes in another property we owned and agree they're great, but I don't want to add another bridge/controller.

Thanks for the ideas and suggestions, everyone. It is surprising (to me, anyway) that no mfr sees a market for a simple, easily configurable, push-button remote (at a reasonable price).

I know this is an old thread, but I remember complaining about the lack of a simple remote as well. I recently did a search and discovered the Zooz zen34. I'm surprised nobody mentioned this; it may be exactly what you're looking for.

I'm setting up a rental and have some lamps on old Enterwave dimmers. There's no way to directly control them except from the alarm panel's automation screen or via voice commands via Alexa. No doubt a renter is going to try and turn on or off the lamps in the normal way and get frustrated. Like you I wanted a simple dedicated control to turn a lamp on/off.

In this particular case, I am using SmartThings because of Hubitat's inability to work as a secondary zwave controller. I installed the driver Zooz supplies, and paired the zen34. Then in the mobile ST app I added the network id of the Enterwave dimmer to assocation groups 2 and 3 on the zen34. Simple and it just works.

The only possible drawback is that if you want to sit it on a tabletop, it looks like the paddle from a wall mounted dimmer switch, and there's no indication of up/down other the tiny led at the bottom. In my case I wall mounted them so they look like normal dimmers. If you want to use it as a tabletop dimmer, you might be able to use one of the Pico stands. Or just print "up" and "down" labels for the paddle, or maybe 3d print a holder.

In any case, it's a really cool little device and relatively inexpensive.

Thanks! I've had no time to spend on this so have advanced nothing thus far. I'll check out the Zooz product. Appreciate the thought!

The only possible drawback is that if you want to sit it on a tabletop, it looks like the paddle from a wall mounted dimmer switch, and there's no indication of up/down other the tiny led at the bottom.

The Jasco 39943 desktop base is a perfect fit for the ZEN34 remote.

Just use one of the many old phones in your box o stuff. Connect to Wifi. Create a Hubitat dashboard. Problem solved!

That was mentioned in the OP, but the desire was for a simple dedicated device with buttons.

The advantage of something like the ZEN34 is that it looks like a switch and everyone recognizes it as such, even people who don't have a clue about home automation In my particular case we have a rental property and simple, recognizable devices are a necessity for lights, fans, etc. even if they are automated.

Plus the batteries in a device like the ZEN34 will probably last for years, vs a phone which needs to be charged daily.

I use these on my nightstands. Convenience matters. WAF, and all…