Z-wave repair - brand new to HE

It has been a little while, but from what I remember: 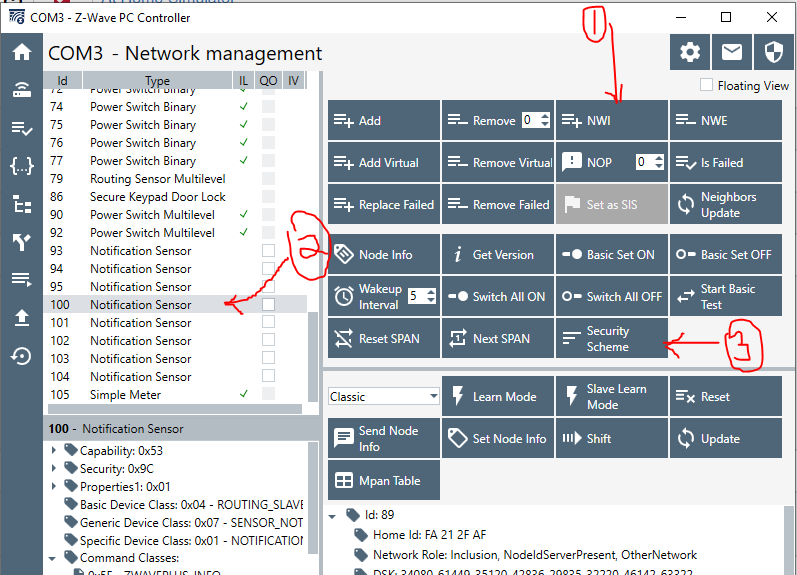 Oh, I had also setup a Fibaro motion sensor, but it didn't take - after a bit, it stopped working. I didn't do much in the way of investigation on it, try to re-activate it but gave up and just added it to my C5 and linked it with Hub Mesh.

Thanks...so there is some time-constraint you have to use the Security Scheme option by when you're adding a new device via PC Controller? Wondering why this works, but not when it's already included...

Still up and running. Have all but two z-wave devices connected. I downloaded a backup in case something goes wrong in the near future.

I'm apprehensive to add apps, setup a dashboard, and start automating things. I really...really don't want to reset and repair everything again.

Should I only add a few apps at a time, let things settle for a few hours, and then add more?

I have my deadbolt functioning fine, the response time is crazy fast. Not used to that coming from ST. It says 24 route changes under the z-wave details page. I still haven't run a z-wave repair since everything functions fine. Is that normal?

Adding apps, creating dashboards, and automating things aren’t going to cause you to have to start over. The C-7’s weakness is in the inclusion process, which sometimes goes badly and creates “ghost” (zombie) Z-Wave nodes that can mess things up. It’s not as bad as it was, many bugs have been fixed, we are hopeful that it will get better.

But adding apps and Dashboards aren’t the problem. Make a backup after you change things so that you can fall back if things go badly.

Logging does a good job of telling you where problems are, and I have never noticed an issue w/apps causing problems other than in the specific automations create in them. It is good to map out what you're going to automate and then choose the app appropriate to do the automation in. So install them, look at their capabilities/settings, and then you'll make better choices.

You should be able to create most of your automations using a few built-in apps:

There is a very very useful app called Hubitat Package Manager that allows you to easily install and update community developed apps and drivers from a central location...not every community app and driver are available in it, but most of them are. Having HPM is a must. It says "Beta" but it's very mature and very stable:

Just a few very useful apps you can get from HPM:

Don't touch the Z-Wave Repair button unless you get written permission.

Route changes only a problem if they become a real problem and you have mesh/performance issues. Go ahead and let your devices and mesh settle in.

Have fun setting your stuff up!

Thanks for the help and insight. Got a few basic things setup pretty easily. The built in rule machine is pretty awesome, I have a very basic understanding of using webcore when I had Smartthings, and this is actually easier for me to understand.

Only small hangup so far is with my backdoor deadbolt. It functions fine, but I would like to be able to disarm HSM, using the exterior keypad, but NOT with the physical lock being locked. I can't find anything so far that accomplished that. I have it set to "arm - stay" when the lock is locked which is great.

Couldn't find anything with the lock in the Package Manager, but found a ton of other useful stuff. I appreciate the suggestion on that!

Essentially if I were to have it disarm HSM with the "unlock" of the deadbolt, you could disarm the whole system just turning the lock from the inside of the door. I need it to disarm only with the correct pin.

Never used this feature, but if you select lock codes as your trigger in RM, you can then select the code(s) you want to use as your trigger, and they should unlock the door, and also execute whatever you tell RM to do.

From what I see the Event Engine app also supports lock codes as a trigger (called Condition in EE) to launch an automation.

I got that far, but when I got the drop down menu under "select code names" my only option is "Any Lock Code". Does that mean anything entered will disarm, or any lock code that's stored in the lock?

I'm not sure...mine shows my lock codes entered (Schlage) and at the top shows the "Any" option.

Yeah I'll try when I get home. The Kwikset lock I have never worked amazing with ST, so I'll verify it's working as it should. Thanks!

Here is what I see when I tried Rule Machine, new rule, define trigger on lock codes. See screenshot:

Looks to me like you can select from the named/defined LCM codes.

Mine seemed to work either way, but only got the lock codes to show up after I added them in LCM.

Everything seems to be working ok, but the HSM doesn't seem to work great with two iris keypads, and the keypad on the deadbolt. Sometimes it's super slow, other times it's lightning fast. Anything I should pay attention to in the logs? Most of what I see, I honestly have no idea what anything means.

I think this is the correct take but you have to be committed to actually using the system properly even if it is a pain to do. A lot of my clients/potential clients get such a system and then stop using it after a year or so.

I've been curious about the DIY stuff like SimpliSafe and Ring. You can actually add monitoring if you want but still have a useful system if not. With Ring you can build up the system or repurpose some of the devices with HE. Another interesting tech is Konnected - re-use existing alarm equipment and they also have monitoring as well.

With Ring you can build up the system or repurpose some of the devices with HE.

I’ve been doing this and absolutely love it. Saves me from having multiple contact sensors on doors and allows me to ensure my alarm is armed every evening and whenever the house is empty. I had Ring before Hubitat, and would constantly forget to arm the system. I the ability to automatically arm as required (not just on a schedule) is really useful.

The integration between systems also allows me to ensure that my doors are locked whenever the alarm system is armed. Couldn’t do that with Ring alone unfortunately...

you have to be committed to actually using the system properly even if it is a pain to do.

Not quite sure what this means. We set the alarm each night when we go to bed and when we leave the house. We turn the alarm off when we wake up and when we arrive. The alarm service files the forms/fees for us each year with the city. We have glass break monitors, contact sensors, fire/smoke detectors, and have never had a false alarm. The one time my wife burned something on the stove, the smoke detector in the kitchen triggered, and we got an immediate call. The connection to the crevice is a separate cell module, no dependency on internet. If I need to, I can VPN into our network, connect to the Vista 15P panel.

We are very happy, the service is local and they have always been very responsive. This is the third house we have used them.

Oops sorry was not referring to you -

I've noticed during my foray into residential tech that a lot of client's alarm systems are not being used properly at all. Either they let their plan lapse and are not using it or just not arming them in the first place.

I had one client who had a working alarm system except video cameras get broken into and all their stuff stolen. Yes the alarm went off and police were called but it made no difference the criminals knew how long the response would be and timed it accordingly. The family has since added cameras and glass break sensors.

The issue is trying to convince (some) people to get into a good pattern of usage with this stuff. Easy to become lazy when in a seemingly safe/secure area/neighborhood/town.

edit: I do NOT do home security for my residential clients, don't want to shoulder the risk.

I have know two people personally with a large security company monitoring service. Unfortunately the response time was very slow. I prefer to monitor my home myself with glass break sensors and cameras and asertain if it's a false alarm or not. I've been very happy with our new V3 wyze cams.

Are zigbee locks typically just faster than z-wave? The reason I ask is I think there's a zigbee module I can plug and play into my Kwikset deadbolt.

It does seem to respond a bit quicker but that is purely anecdotal. I have had less issues with Zigbee than Z-Wave for my Yale YRD256 - mostly with pairing and connectivity.

I still prefer Zigbee due to the ease of install/use... when the ZW Long Range devices start to appear maybe that will change.

I should mention that others in this community are happily using their Z-Wave+ locks so ymmv.