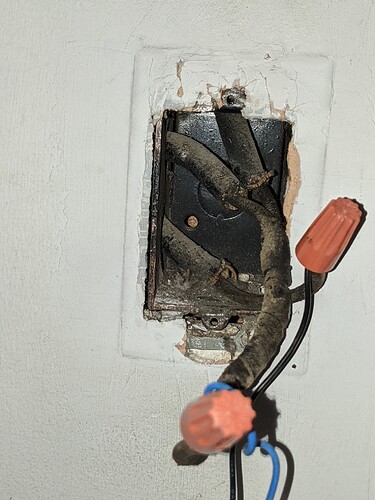 Furthermore, the join is on the switched side. The other theory, then, is that there's an additional downstream device (lamp, receptacle, whatever) that is also switched by this switch). If true, I have no idea what it is (and I've lived in this house for more than 25 years). No receptacle that mysteriously doesn't work sometimes, for example. (And this is a bedroom light, it's on some but off quite a lot also, something that didn't work when this was off would show up!) (Yet another theory is that it's the incoming hot that joins off to power something else plus go to the switch, and the blue wire is wired to hot, and the black wire is the switched output. That'd work on a normal switch, which is symmetrical, but I don't think that should work on an X-10 dimmer switch, which is what this is.)

The switch being replaced is an old X10. Which works fine, including dimming the LED bulbs in the ceiling fixture. Which I think is some evidence that it's not wired "backwards" as I speculated above.

Next step is to disconnect the switch, power the circuit back on, and check which of the incoming lines is hot, I guess. Try it with a basic mechanical switch, see what happens.

I think I'm going to find no neutral in this box, so actually replacing the switch will have to wait for some Zwave switches on order that will work in that situation. The other light switches I've checked on this floor are all wired as switch loops; this one can't be a simple switch loop, though it might be a switch loop also controlling a second location.

Always an adventure! Every time one looks inside the walls (or tests remotely what's going on in there).

Yet another theory is that it's the incoming hot that joins off to power something else plus go to the switch, and the blue wire is wired to hot, and the black wire is the switched output.

Would seem most likely.

If you have a multimeter or one of those little neon voltage testers, you can verify which wire is "hot".

You will have to run a measurement wire to a nearby plumbing fixture for ground reference. I'm pretty sure the metal box is not grounded. The "hot" wire will show voltage between it and the measurement ground.

You can also disconnect the two joined wires and see what doesn't work. You would then know the input power is on the black wire.

Yeah, got meters and testers. (You don't actually need a ground with the neon thingies, even; low enough power that random body capacitance is plenty if you hold the other pin, and the neon bulb very reliably limits current passed to safe levels.)

And I thought of one thing that might be powered downstream of this that I can check, that wouldn't have been noticed (a back sun-porch configured as an office, and hardly ever used; the ceiling light is not connected to this but I think there's also a light on the wall that we don't use).

Taking things apart and testing the pieces is always fun (though duplicating those old in-box splices is NOT fun; and there's often not enough slack to do anything else)

[ETA: the wire entering the box and connecting just to the switch's black wire is the incoming hot, based on removing the switch, turning on the breaker, and then testing both wire ends in that box with a neon bulb tester. So the X-10 switch is not wired backwards, and whatever is happening with that joint in the box, it's on the switched side.

And...I checked on the sun porch. There are two things that could barely possibly be fed from that, and they're both hot when the switch is disconnected and the joined wires in the switch box are hanging in the breeze. So, still no idea what that joint accomplishes or where it goes.

But, clearly, can't put a Zwave requiring a neutral in this box as it's wired now. I've got some of the no-neutral-required switches on order, I'll just wait and use one of them.

I suspect, when the time comes, I'll disconnect the splice, figure out which one goes to the ceiling light, and cap the other one. And wait and see if we ever discover what it feeds

It’s knob and tube. That’s what you see at the boxes. Very typical.

The ceramic knobs and the ceramic tubes, are in the walls and in the attic space, and or in the basement running through the joists.

10% of my wiring still has this. Typically you are going to have a hot that continues to many other outlets across the entire house. The other wire is the load. There is no neutral.

Yeah, I recognize it -- in fact I said so in the first sentence of my post! I've replaced a lot of it, but the bits in the ceiling of the first floor, and the walls, are just too much trouble to dig out, and it handles the low loads of lighting well enough (separating the wires by inches, and all that ceramic any time it gets near wood, actually makes it pretty safe).

I wouldn't swear to the formal terminology used in knob-and-tube, but there's something exactly equivalent to a neutral—the wire that's connected past the load, and which goes back and eventually connects to the neutral bus in the breaker panel (the entrance has been upgraded to breakers long before I bought the place).

And, because my life is just like that, this one circuit is also the one the refrigerator in the kitchen is on. So I don't get to poke around slowly forever, there would be consequences!

there's often not enough slack to do anything else

I still have nightmare about knob and tube. I spent hours working for free because of not enough slack but then again... Aluminium wiring also keep me up at night.

Aluminum wiring was a hot topic when I started working on my own house wiring, 1979 I guess. Happily I have never actually encountered any. (Unlike knob and tube, which at least 3 of my houses including the current one have had some of still.)

Just for completeness, here's what's inside that taped-up joint. They twisted it a long way back then! Doesn't look soldered, at least. 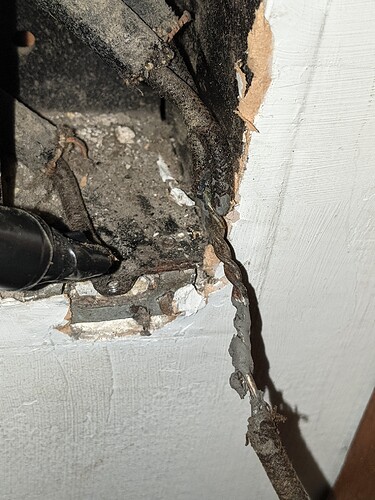 Now to un-twist it and find out which bit goes where.

[ETA: Untwisted -- the short piece of the two that are joined goes up to the ceiling fixture. The long piece, I have no idea. It's going to end up capped off and curled in the back of the box, maybe we'll find out eventually.

Gonna be a week or two until the order of no-neutral switches makes it here, but I think I'll just leave that light out of service (nobody else here but me to be bothered by it, hot capped with a wire nut and taped of course). Have lights on the headboard, and always carry a flashlight, getting in and out of bed will be fine.]

At a previous house, the inspector of the new buyer found some knob and tube and I had to hire an electrician to change it. That was before the modern home automation... But if I had some in my current house and with all the difficulties it seems to cause, I would most likely have it re-wired.

At that house, it was much easier to change than I had expected... easy to say though since I wasn’t doing the work... Required patching some holes after the fact and doing some re-painting. Luckily, I had some left-over paint.

It's really very stable and safe. Can cause difficulties with electricians or homeowners who don't understand it I guess.

It's also 25 years since I've bought or sold a house, don't really know what's expected today. In a 100-year-old house, nothing requiring cutting through the crown moulding, I would hope!

It's really very stable and safe.

Stable perhaps but safe? I guess the concept of grounding didn't exist back then. In the event some of the insulation disintegrated and ended up touching the metal box, it would become energized with potentially deadly results. I suppose if you use plastic wall plates that's mitigated to some degree, but still... I imagine in a system like this, it would be impossible to use GFCIs at the panel on any of these circuits either.

Eek. I thought I had problems when I start to look inside walls, etc. But most of the horrors I find are from pervious owners not knowing what they were doing, not the original construction.

None of the houses I've lived in were built after grounded outlets became the norm. Most of the grounded outlets are ones I've added myself, because I do think it's useful. But...floor lamps, for example, don't generally even have grounded cords, so they're the same in a grounded outlet or regular. I don't hold my ceiling fixtures to a higher standard than that

The inspector my insurance company sent around checked to see if the ceiling fans were properly grounded (none of them were when we moved in, but I fixed that before the inspection).

connecting the dishwasher with 2 conductor lamp cord into the side of an existing outlet.

That deserves a big WTF ...

I think of something built in the 60s or later as "new", myself

That deserves a big WTF

I had a long extended tirade of foul words for the moron who put himself, his family and everyone else subsequently in this house in danger by doing things like that.

That was the tip of the iceberg. There were so many coax and phone lines running around the interior and exterior of the house that I filled up an entire 40 gallon trash can with them. For whatever reason, there was one phone line that I hadn't yet removed. Good thing, because by chance I happened to find the other end connected to the side of an electrical outlet in an adjoining room.

In another room I remodeled, I found an open electrical box with loose connections hidden behind a sheet rock wall. In the back yard, I found two pieces of romex spliced with wire nuts and buried directly in the soil only a few inches deep. Romex, not even UF type cable, about 20" shy of the required 24" burial depth.

There's more but you get the picture. Whoever built this house went overboard and wired it like a commercial building, and some moron came along and turned it into a death trap.

I think of something built in the 60s or later as "new", myself

Most people do. But this is South Florida. The only culture you'll find down here is in a petri dish. Very little in the way of historic structures.

i would be more worried about futzing with the wire casing.. looks like asbestos.. In cottage from 1920'-30s wiring. They dont touch it.. left it be and put some basboard wiring in place of it. with new runs.

Although some of the oldest ones are down there; there just aren't very many, or very many left, if I understand this (early Spanish settlers were in Florida way before Massachusetts and such like places got colonized).