Water Flow shutoff valve's that work with HE

Continuing the discussion from Best motion sensor on battery?:

What is there difference between the home seer link and the leakgober ??

The homeseer is just a rebranded leak gopher - at least that is what I've been told. And as they look identical, seems believable.

Ahhhhh thanks for clarifying, I was confused. I thought you where combining items as doing something here......lol

Can I ask why you went HS route instead of leakgober

You didn't ask but there's a reasonably priced zigbee valve shutoff that works well and it runs about 32 USD. search the forums

To this list let me add - I have a LeakSmart zigbee in-line water valve that has worked flawlessly for 5-6 years now. You can find them on eBay for $60-80.

Find many great new & used options and get the best deals for leakSMART 8830000L Automatic Brass Quarter Turn Valve at the best online prices at eBay! Free shipping for many products!

Thanks ! I will search for it and check it out

I use Dome shutoff. Works great.

I could be mistaken, but I imagine that this is the type of zigbee valve controller that @Rxich referred to:

Like the Dome referred to by @Tim-in-Ca, this type of valve controller fits over an existing ball valve, and relies on that ball valve moving rather smoothly.

Nor am I. I had one for a year and found to have insufficient torque to consistently shut my main valve. So I was uncomfortable relying on it.

found to have insufficient torque

Do any of these monitor flow of water ? Looks like they rely on a sensor

Save water and money with a home water monitoring system: leak detection, automatic shutoff. Control water remotely from your smartphone with Flo by Moen.

great excuse for me to break out the acetylene torch and sweat in a brand new valve. Mine was 20+ years old anyway

I think I am looking for something like this

It montiors flow with a meter and have shutoff value and works on zwave . I haven't searched the forums yet to see if anyone else is using

I’ve had my Dome for about 3-4 years, and haven’t had an issue. I did have a new ball valve put on as the old one was 18+years old, hard to turn and the handle was bent by the builder. I run a rule that exercises the valve every month. I also use Samsung water sensors to detect leaks in 12 areas. I recently installed a Flume monitor to see if I can detect smaller / slab leaks, but haven’t integrated with HE yet.

I have used an EcoNet Bulldog valve for a couple of years now. There have been at least two or three instances where a water leak was detected. The valve has worked flawlessly each time. Some people recommend that you cycle the 1/4-Turn valves 2-3 times annually regardless, just to keep them moving freely. This seems well built and provides lots of torque. When I've had to turn the water off for other reasons, I've watched and it has never struggled. Mine is a 3/4-Inch valve. 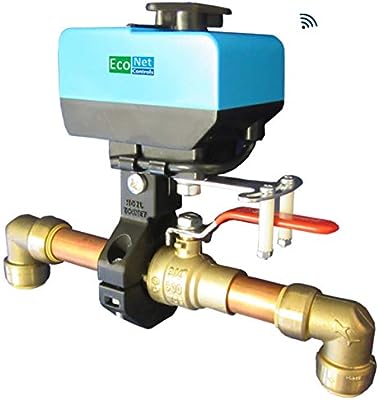 Ultimately, I plan to add a second one so that as the water turns off, 1-2 seconds later the other will open to start relieving residual system pressure into a drain. I've just got to look into building code here as far as things like an air gap. The idea is to reduce escaping water from the area of the leak to further minimize damage.

Further to this, when I spoke to someone from EcoNet Controls regarding another matter, he discussed a situation of a washing machine (as I recall) developing a leak. While the water sensor properly sensed this and shut the water off, the problem ended up being a drain issue. I'm told that the machine just kept pumping out the dirty water all over the floor. As a result, I have added 20A relay modules (overkill since the circuit is only 15A anyway). If a water lead is detected at a washing machine or the dishwasher, not only will the system shut off the water, but it will turn off the power to the affected appliance as well.

I have this as well - replaced my Dome which still works fine but seems less powerful (although I read somewhere they have the same motor - maybe different gearing dunno).

I like the bolt on valve switches - you can operate them manually or remove in the event of an issue + I didn't have to get a plumber involved to install. Also attached a contact sensor as an extra verification that the valve actually open or closed. All good so far.

I also noticed that Zigbee device... yikes wonder why it's so cheap would be worried about it burning out or worse but the price is tempting.

Which driver are you using for that in Hubitat?

@mraz.camren
The built-in generic z-wave valve driver will work with the Bulldog.