"waking up" a motion sensor for faster operation?

There are a few cases, with smaller "task oriented rooms" (closets, bathrooms) where even a small delay on a motion sensor triggering can be a little annoying, esp at night.

Is there some kind of concept of "waking up" (not triggering) a motion sensor in order to have it respond to motion more quickly?

afaik the sensors work on their own accord with the sensor inside of them. there may be different reaction rates based on brand, but i don't think there's a way to predict the motion

What kind of motion sensors are you using? Almost all of my Zigbee sensors are pretty fast, with a few of those (Iris v2, ST v5/2018) standing out as particularly great, but I'm talking only a dozen or two millseconds later for the ones that aren't this good--hardly noticeable to a human. Almost all of my Z-Wave ones are much slower than this, a few hundred milliseconds for some of the "better" ones and way worse for some of the bad ones--all noticeable to at least some extent. Alternatively, if the space has a door and the door operates in a predictable fashion based on the occupancy of the room, you could consider using a contact sensor instead.

The other part of this is what automation you're using to control the lights. A small app like Simple Automation Rules (formerly Simple Lighting) or Motion Lighting is likely to respond faster than a Rule Machine rule. And besides the sensor, there is the issue of the bulbs/switches you're controlling and how fast they respond. If you haven't figured out where your perceptible delay is coming from, that may be worth doing. (Personally, with Iris v2 sensors--or most of my sensors, but I have a lot of these--and Hue Bridge bulbs or groups, everything is pretty fast, despite the fact that there are several "hops" involved from the sensor to the hub, the hub to the Hue Bridge, and the Hue Bridge to the lights.)

But to answer your actual question: no.

Using battery powered Inovelli 4-in-1 sensors, they work well 90% of the time but sometimes they can be sluggish with 1-2 second lag. They're all set up using Motion Lighting rules and controlling Lutron light switches and dimmers

Maybe a placement issue? Try a different angle or spot in the room?

I think Zwave motion sensors in general are a bit more sluggish than Zigbee for some reason. That has been my experience anyway. My Iris V3 have nearly zero delay compared to my Monoprice and Zooz. I don't know where Inovelli falls as far as responsiveness compared to other sensors?

placement is fine, because sometimes its instant, I don't know, could be anything differences in light level, hub load, who knows.

If you were really into it, you could probably graph the delay between motion active and the light coming on to see if that change in time fluctuates and correlates with anything else.

I suggest looking at your hub logs for timestamps on device events as well as automation triggers and actions. I don’t think there’s any other way to resolve down to the range of hundredths or milliseconds where the delays are coming from.

Maybe if you graph the timestamps it’d be easier to compare or look for trends.

I found that contact sensors on doors, drawers, and cupboards are the fastest way to turn on a light.

I use Zigbee motion sensors, my lights turn on instantly (no perceivable delay). The only times they don't is because the hub slows down due to some internal issue. After a reboot all is instant again. My slowdowns is probably due to having had browser windows up with websockets connected to logs and other things for days. These slowdowns is not something I've investigated in detail and my conclusions are very much anecdotal. Don't take this as me saying that these things slow down the hub. I don't leave my hubs alone, I always tinker and change things, so hard to know exactly what makes a hub slow down after a random number of days. I'm ok with reboots fixing it.

I use Iris v2 motion sensors and they are amazingly fast to respond.

It is important to locate PIR sensors in such a manner as to detect motion across the face of the sensor, not straight on which is much slower.

I use Zigbee motion sensors, my lights turn on instantly (no perceivable delay).

Same here. According to logs, the time from motion detected to the light reporting as being on is 130-180 ms.

I have 2 Hue sensors.
1 turns on a hue bulb, the other turns on a fibaro relay

The one attached to the hue bulb is definitely faster than switching the fibaro relay. Its quite noticeable as well. I can be almost 2 steps into the room before relay turns the light on, where as the hue bulb is on as soon as i've entered.

It could also be positioning, the sensor controlling the relay is further from the door than my other motion sensor.

While this is probably generally correct, there are fast zwave+ motion sensors as well. I have two Fibaros and a Dome that are as fast as my Xiaomis or Iris v3.

fast zwave+ motion sensors as well. I have two Fibaros

There are several firmware releases of the ZW5.

Will have to look into this then!!

You'll get lots of difference of opinion here but the end result is any RF sensor can be slow at times. In general the zigbee ones are faster. The problem you are having is one that took me down a different road years ago.

I purchased some GE motion dimmers and GE motion switches(They are zwave). These are switches that have a motion sensor built in and can operate as motion switches without any hub involvement. Because they can be set to Occupancy mode they are just about instantaneous in that mode. I use these on exactly the use cases you have. Kitchen/Bathrooms. Especially at night. Luckily there are ways with custom commands to turn "occupancy" and "Vacancy" on and off in their firmware. So if you don't want the light coming on with motion, you can disable that. I've been asking Inovelli for a smiliar feature in the future...Here's to crossing fingers. 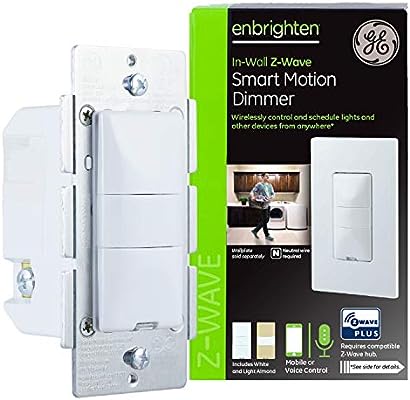 Of course that motion sensor needs to be in a good spot based on where your wall switch is...but I found in things like 1/2 baths...It's generally in a perfect spot.

My spots for these:
Kitchen
Bathrooms
Stairs to basement
Living room

Here's an example of a rule where I set this. This turns OFF the automatic turning ON of the light at Night. I then use the motion sensor of this switch to trigger some very low accent lighting...just enough to get your business done. 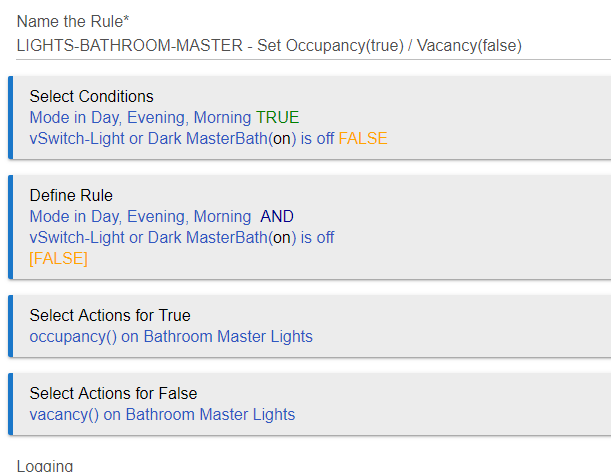 You can also pre-set the dimmer level without turning on the light like this: 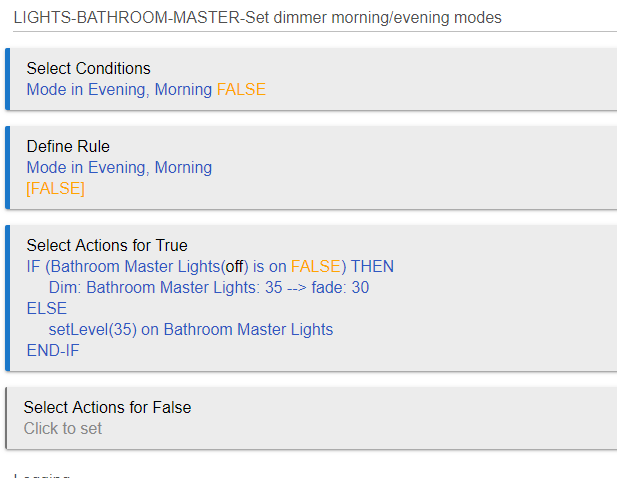 That's a very old version of RM you have there!

Most of my RM Rules are still v2.5. I can't see any reason to upgrade them since they work so well.