I am attaching 3 pics below. They are my Mesh Wave Details using Tony Fleisher's app. I really don't understand what I am looking at. I have googled some of the various terms like LWR RSSI or RTT Avg and it was really "Greek"" to me. What is good? What is bad? What do I need to work on and HOW? Thanks
Ginny 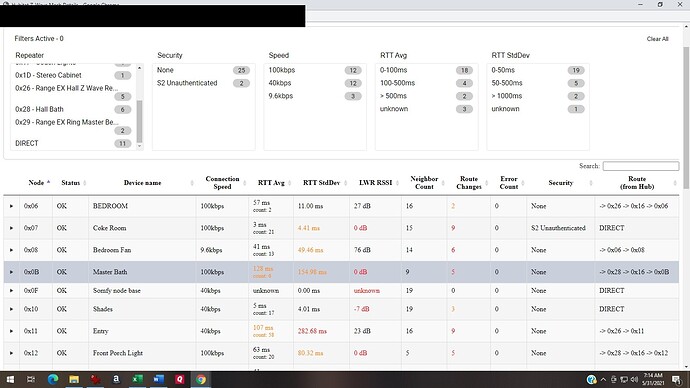 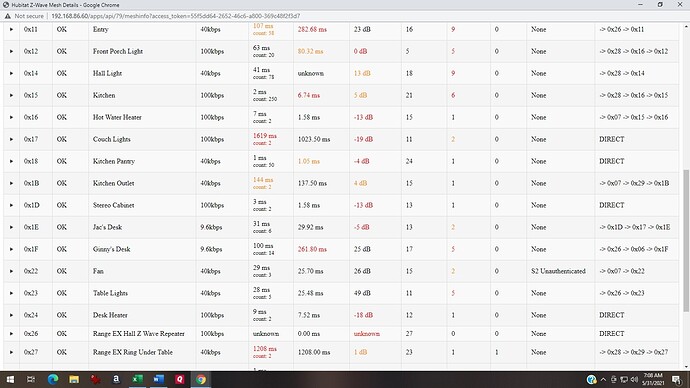 The first question is - are you experiencing any Z-Wave issues?

Here are those that I know:

Round trip transit time - average time to send a command to a device and receive ACK from the device. Lower is better, but there is not much you can do to fix except fewer hops, higher connection speed, and faster devices.

Standard deviation (spread of values about the average) for round trip transit time.

Bryan Copeland answered this in another thread:

It is the received signal between the end device calculated across all the hops and calculated against the background noise level.. So a negative number means your signal is lower than the noise level, which means that at a minimum you will have a lot of re-transmits from dropped packets due to the receiver not being able to get the packet cleanly. .

Are you having issues, or just curious. I discovered that I have no issues, my mesh looks terrible. All of my devices on one hub have LWR RSSI that are red unknown, or red small negative numbers. I quit worrying about it.

LWR RSSI that are red unknown

Send those devices a few commands from their device page, the unknown will be replaced by numbers. It doesn’t populate instantly. It clears on reboot, I believe, so the hub has to run for a while to accumulate data. The Mesh Details app merely reports what the hub gives.

This guide https://www.silabs.com/documents/public/user-guides/INS12712-Z-Wave-Network-Installation-maintenance-Procedures-User-Guide.pdf contains info that provides more details on many of these metrics.

Some of them are dependent on the SDK level of the Z-Wave devices in your network, notably LWR RSSI which is described in appendix A.4; all repeaters and destination nodes in a given route need to support the powerlevel command class (so they need to be based on SDK 6.60 or newer; this should include most Z-Wave devices released since 2019).

The value of the "Route Changes" column seems to be a key indicator of mesh stabililty. Described in appendix A.1 "RC is the number of times the protocol needed additional routes to reach a destination device because of a transmit failure. The number is a combination of Last Working Route (LWR) changes and jitter measurements during transmission attempts between the gateway and the Z-Wave device."

If a LWR has failed, that's bad for performance. LWR's are stored in the device's nonvolatile memory and are remembered when the device loses power, so they aren't expected to change often. If a LWR no longer works, in the worst case, a new route has to be discovered via explorer frame flooding which is slow and impacts other devices trying to use the mesh.