I am attempting to update the firmware on one of my Red Series Inovelli Switch from 1.19 to 1.20 but it is not working. I am getting the following error:

I'm using the 1.20 firmware that I downloaded from Inovelli for the LZW30-SN switch.
https://files.inovelli.com/firmware/LZW30-SN/ 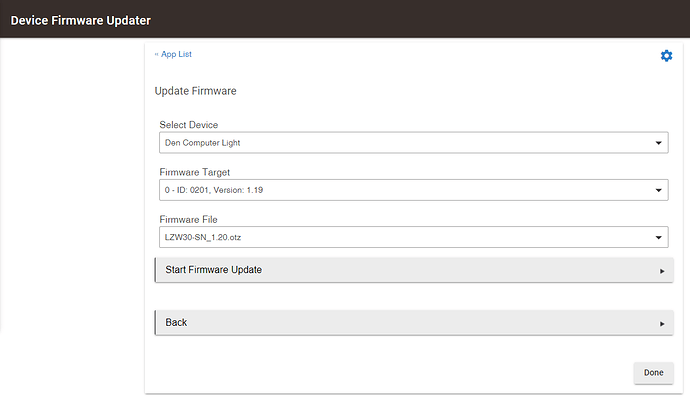 Looking for ideas on what could be the cause of this error...

Tagging @bcopeland who wrote it.

I had the same problem with the LZW30-SN going to the firmware version 1.20. I kept getting a couple of different messaging but I keep aborting and restarting and after around 20 minutes I was ready to give up and it finally took and updated to the version 1.20.

I find that the Inovelli switches are very finicky. I have a lot of them and the upgrade can fail over and over and then eventually just work for some reason. Sometimes the device hangs and I have to airgap it to get it back.

The devices close to my hub though seem to work the best. Once I try upgrade devices that may go through a few hops it gives a lot of problems. So I might just get into the habit of moving the hub around to do the upgrades.

Fixed in next hot fix release

It works! Thanks for this!

Out of curiosity, does anyone know of a way to see the firmware of select (of all) z-wave devices in one screen? As an example... In case I want to update all my Switches that are on an older version of the firmware...

I very much agree!

@bcopeland, it Device firmware updated sometimes doesn’t seem to work for updating Inovelli Red or Black switches from 1.19 to 1.20 on 2.2.158. I tried on three switches in the past days. When attempting the update, it starts the process, but looks like it gets stuck. The switch LED becomes blue (solid) or stays stuck at the previous light effect.

This is the screen where it seems to gets stuck at. The progress bar doesn’t move for a while, though at one point I left it there for several minutes when the LED was blinking blue as expected and it did start the process. 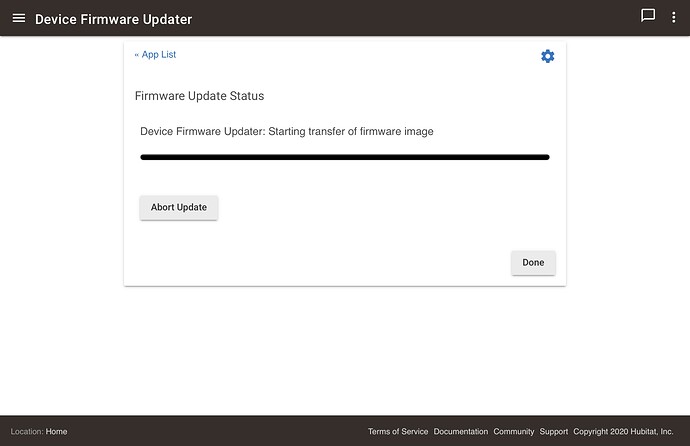 The logs show the following:

When I cancelled, the switch then becomes unresponsive (physically or via Hubitat) and must be air gapped before it works again.

It may just be a cosmetic problem where I need to wait more every time...? 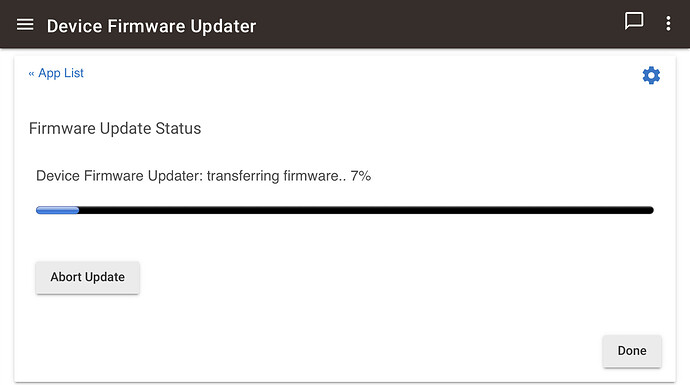 At that point, I Aborted the update. I also checked the firmware version to see if it had updated, but it was still at 1.19. So with this, it seems that there is more than a cosmetic issue unfortunately...

I also checked the logs and found nothin new. Just the same as above.

Did you get firmware to update?

I have a case open with Inovelli and they want me to update the firmware. I attempted to update one of my dimmers to 1.48 and the firmware tool just stopped pushing the update without any errors. I attempted a couple of more times and received the following error:

I went to look at the dimmer and LED was showing a solid, soft red color. The dimmer functioned correctly physically and through Hubitat but continued to show the notification. When I air gapped it, the notification went away.

I am also going to attempt to update one of my switches to see if I experience a similar behavior. I have never attempted to update the firmware on one of these switches so wasn't sure if the red LED was an indicator of something.

Unfortunately not. I still am not able to update the firmware with the new Device Firmware Updater. It doesn't work for you either, you can try using the earlier version. Note - there are 2 versions...

Hubitat OTA Z-Wave Firmware Updater [584828d8cef1014c0b5e49ee] The firmware updater is in the form of a driver. It is a utility based driver similar to the basicZwaveTool. It is designed to be switched to, used to update your devices, and then switch back to your original driver. While released exclusively to the Hubitat platform. This is not a product of Hubitat Inc. This is a community developed and community supported feature. Use at your own risk I am providing this as a convenience for …

Thanks. I will give that a try instead. I was hoping to use the latest and greatest tool as it looked easier to use than the device driver.

@bcopeland Is there anything that I can provide that may help resolve the issue that I am experiencing in a future release?

This indicates that after multiple attempts the device was not able to receive the firmware parts .. At this point the device has given up.. This is usually indicative of mesh issues, or overloaded mesh (too much traffic)..

@bcopeland, as noted above, I am still unable to update my Inovelli devices’ firmware. I have the latest Hubitat Firmware. I just got myself a Z-Wave Toolbox and have been looking to see if I can find issues with my mesh. There doesn’t appear to be much interference and the mesh seems to be doing okay. That said, I am no way near an expert on Z-Wave... Just learning as I go...

Is there anything specific that you would recommend I should be looking for? I plan to spend a bit more time on this over the weekend.

I have a new setup but my Z-Wave mesh is strong (followed the Hubitat guides) and I have not had any issues with mesh slowness or unresponsiveness.

It's not a mesh issue.. it's an issue with the device not responding in some situations to the firmware update request..

This indicates that after multiple attempts the device was not able to receive the firmware parts .. At this point the device has given up.. This is usually indicative of mesh issues, or overloaded mesh (too much traffic)..

Any insight on why I would be receiving the exact same "ERROR: The device was unable to receive the requested firmware data" message, when it is in the room that the hub is in?

Every attempt using the Device Firmware Updater has failed for me, except one attempt (it was like attempt #5 for the same device). The device I just tried, in my office, next to my hub provided the typical error, and I switch the device to use the Inovelli Z-Wave Updater code, and it works. it is processes much faster too. in the time it took the built-in app to update to 2%, the device driver version has updated to 28%.

I have 3 more dimmer to update, and I can hold off if you would like to do some more testing....

I have had success with Inovelli by power cycling and disabling all security.

My office dimmer has not been functional since the update attempt. I was able to get it to take an update only by excluding it and pairing it to a Z-Stick with Security Mode disabled. Thankfully these devices are quite tolerant to failed firmware updates. Unfortunately they are excruciatingly slow to recover after a bad update. 1.5 hours to complete the firmware update after the failure. What is most odd, is that the office dimmer's route back to the hub is office, to Guest Room, to Gym, to hub. In order of distance, closest to farthest (both in linear distance, and in number of obstacles/walls), is Office, then Gym, then Guest Room. So I wonder if this rather long route is attributed to the failed firmware update.