Greetings all, I recently switched from smartthings to a hubitat elevation. My house contains ge/jasco switches. I'm seeing delays of 3-4 seconds in various automations (bulbs and bond home). I believe this to be related to the switches and was wondering what everyone would recommend. Unless there are things I should try first or if all switches are like this...

Hey Dude, Welcome to HE. First off the delay is not normal. What devices do you have ? z-wave or z-wave +? How many and what is the sq. ft. they are spread over?
do the devices respond normally from the devices page with on/off commands?
Check your z-wave details page from settings and post it here

If these are zwave switches we should probably take a look at your zwave details page. I'll hazard a guess and say in the migration you ended up with some zwave inclusions that failed the first time and created ghosts. Not uncommon. As @Rxich suggests if you want to take a screen shot of your zwave details page and post it there are a number of folks who will give advice.

Beyond that I really like Lutron Caseta switches. You'll need their PRO hub for integration but they are fast and rock solid.

here is a screen shot. it's a mix of s2 and regular zwave, anything hardwired has no real issue. It's the various other smart devices (like my fans which use a bond home) or some lightify led strips and bulbs. House is only 1700 sq feet. 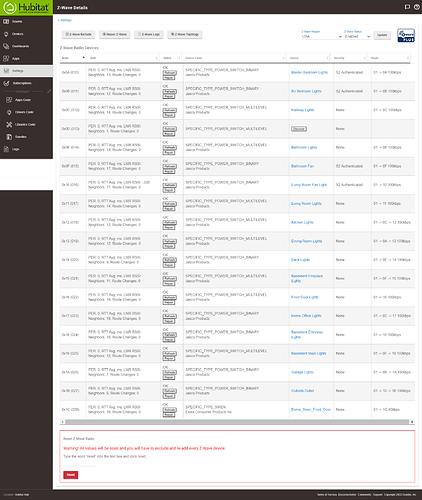 Device OD (hex) or 13 (dec) looks like a ghost and may be causing you issues. Odd that none of your devices are showing RSSI info. Did you recently reboot?

If you can get rid of that ghost I think you'll be happier... lots of info in the community on how to do that but basically you need to find the device that it is a ghost of, sometimes the next one in line, and remove power to it. Then click repeatedly on " repair" until a "remove" option becomes availabvle, then remove it. Could take a few tries.

Interestingly enough all I had to do was click refresh and i was given the option to remove. I'll see if performance improves, i'm not optimistic though

It’s a start. May not make any difference. All of your devices have plenty of neighbors. I don’t understand why the RSSI numbers haven’t populated though. They should be an indicator of the quality of the connection between HE and the device. And the ms response time of course should ooont to slow devices. If you’ve rebooted recently that would explain why they haven’t populated. But maybe wait for those to populate and then let’s see if they show issues.

how long does rssi usually take to populate? i restart my hub daily at 3am, but maybe I should stop.

i restart my hub daily at 3am

Why? If you are noticing a slowdown, perhaps we can address that?

i'm coming from smartthings, so I just got used to it. Is there a recommended reboot cadence I should follow? My hub has been fine, other than this switch issue which was also present in my smartthings setup. I was hoping hubitat would eliminate it

I usually only reboot my hub when I'm installing an update. There are folks who do otherwise but I think @aaiyar's advice is right - figure out why you need to reboot and address root cause. Of course if it's ST hangover I get that entirely!

i'm coming from smartthings, so I just got used to it.

We're running ST (v2 hub) as our production hub and never reboot it. It's completely stable. Daily reboots on either ST or HE shouldn't be necessary at all.

I can't believe how attentive this community is, smarthings had a great community too but I grew tired of having to use a raspberry pi to integrate things. I'm thinking the culprit might be these GE Zwave switches, but i really want to make sure of it before I make the plunge and go lutron. We have a series of fans in the house that use RF remotes. I use bond to control them, the idea was to set up switches to relay the commands via local API but the delay drives my family nuts. I used to think it was the best I could do but I realize it's not and others don't have this problem. So I traced it back to the zwave switches as when I run a virtual switch or commands from a network pc, it's nearly instant.

Is there a recommended reboot cadence I should follow?

Not really - I reboot my hubs only for platform updates and power outages. Can I ask how you are rebooting your Hubitat? Are you cutting power to it? Or using a rebooter app? Or something else?

I find the Hubitat Zwave Mesh Details app by @tfletcher61 particularly useful. If you exercise those switches do they populate the RSSI and ms responstime fields in mesh details? I'm guessing you're right but it would be good to confirm.

I'm assuming the zwave switches control electrical circuits as well and you want them to go on and off with the fans? Otherwise you could just use a button controller.

I had a couple of those Jasco switches. Never did really like them, but they should still work ok.

so the fans that they control need power, so I actually have them set up to get constant power all the time through the existing switches (both wired to the same line wire). I could just use a button controller and tie the line/load for the fan giving it constant power. The button controller would then be able to run the commands for the lights, and modes of the fans. Any recommendations for this route?

The other option is lutron/pico's, which I think could work as well and work in areas like my kitchen which is a combination of hardwired lights and bulbs/cabinet led lights that are zigbee. And the picos would work in the areas with fans. Just not sure how many buttons I have to work with on the picos...

Just not sure how many buttons I have to work with on the picos...

On, off, up, down, and a little button in the middle makes 5

But they have other models as well, including one specifically for fan control.

I'm a huge fan of Lutron. I have about 25 switches and a dozen picos in various configurations.

here is what z-wave mesh details is showing 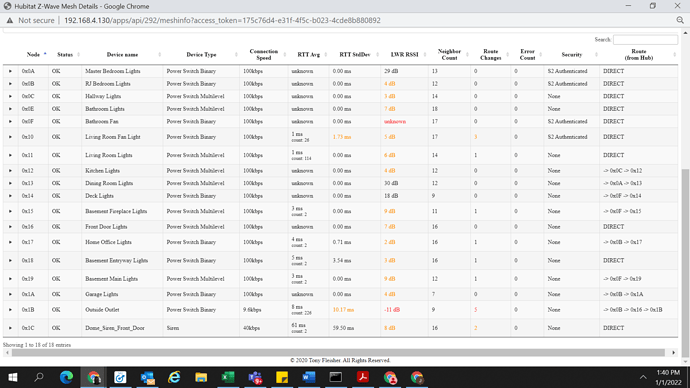 Your problem is definitely not the Jasco/GE switches, I and others have entire households of them and they work immediately and w/out issue. I also use Lutron Picos extensively as my wife loves them. Don't use Lutron wall switches as my wife prefers "normal" paddle switches for most wall mounts.

Removing the ghost (which hopefully completed successfully when you used the Remove option) should clear up your main issue.

As others have noted, don't reboot daily or on any schedule, not needed if things are working as they should, and just masks issues if not working consistently.

I do reboot after excluding or including more than a few devices, or after removing a ghost, that does seem to help w/hub stability.

Are your Jasco switches, Z-Wave, or Z-Wave+...the Z-Wave switches don't report status like the Z-Wave+ switches do, so that can cause problems w/automations that include on/off optimization, as they won't send a command if they think (erroniously) that the switch is already on or off.

so the switches being used in all 3 rooms are Zwave + switches. I can tell you if I execute the switch turning on in the hubitat menu it's ~1 second to turn the lights on. If I do it at the switch it's between 3 and 4 seconds.