You don’t need to code but setting things up is not as easy as wink robots but the power of the automations is not limited either. The built in simple apps are powerful compared to anything wink can do.

Just gotta jump on board and the community is awesome for supporting new users.

Hello, welcome to Hubitat. I am a former Wink user, there are lots of us over here.

And just a side note, Hubitat isn't Wink. You have to change your mindset a bit. The Wink app did everything, both the admin and user side of things. Hubitat has a computer browser interface for admin or users (dashboard), and the phone app for dashboards. Wink has the very limited robots, Hubitat has many ways to automate things from simple to very complicated. Hubitat allows lots of control over devices, and apps where Wink had only the built-in stuff.

Anyhow, ask lots of questions, and don't let yourself get stuck on something. Ask us and we will almost surely have an answer.

mark - thanks for the quick reply. I didn't seem to have a problem with the bulbs on ST but who knows.... I think the youngest of my bulbs is like 6 years old!

steve - thanks for the reply and attention. I think I'm going to pull the trigger and buy a hub now

neonturbo - thanks as well for the reply and some more detailed answers. Got it with the garage doors.... I've been dealing without the integration for a few months now and hardly ever notice it so I might just do without. I've been pretty lucky with the GE bulbs. Every now and then some get disconnected but it's usually related to a power issue whether it's surge or outage. I reconnect and they work. There was one on my porch that was on the fritz for a while but has been fine for ~8 months now. I know and see the differences from Wink and am excited to get started. I always wanted to be able to have a desktop interface I never understood why Wink didn't offer it.

Excited to get started and start asking some questions. I come from an engineering sort of mindset so any time I have specific questions, it'll hopefully be detailed enough of a post that people can offer a good solution. We'll see..... heading out to the edge of that diving board now....

it'll hopefully be detailed enough of a post that people can offer a good solution.

If not enough, people will ask for the details they need.

Glad we pushed you off the fence

If wink comes back up, migrate all your stuff off of it, then put it in learning mode, block internet access in router, then you can trash the account, leaving the wink hub in repeater mode, at least you can still get some use out of it,

Got it with the garage doors.... I've been dealing without the integration for a few months now and hardly ever notice it

While a tilt sensor works, a contact sensor works as well (I use an Aeotec Door/Window Sensor 7, has worked perfectly for me for over a year with the MyQ Lite driver). To me, a contact sensor is better because it can alert you if the garage door is forced open for a crawl-under. I left Wink when I received the notice that Chamberlain functionality was ending.

One other piece that you may (will) want is Hubitat Package Manager (“HPM”), an excellent community driver by Dominic Meglio (@dman2306). Installs your drivers and apps, keeps them up to date.

Welcome to the community!

Just want to congratulate you...many show up and ask questions w/out looking/reading first. You on the other hand looked and read. Kudos.

Thanks EVERYONE. To be fair.... I typed up my questions and then searched. So I was half-*ssed lazy

So I was half-*ssed lazy

a contact sensor works as well (I use an Aeotec Door/Window Sensor 7, has worked perfectly for me for over a year with the MyQ Lite driver). To me, a contact sensor is better because it can alert you if the garage door is forced open for a crawl-under.

I agree. I am using the SmartThings sensor. 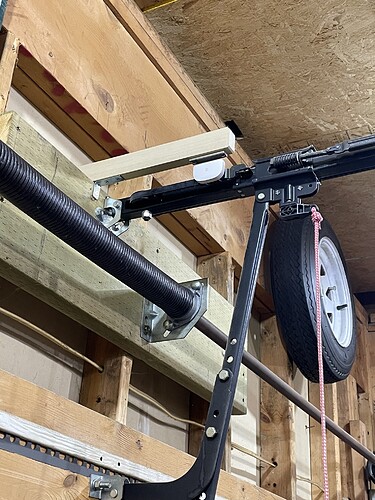 Thanks to all who posted! This thread was the last needed read to convince me. I just ordered a hub. About to say good bye to Wink, sad to see it go but no choice left. That said I am excited with all I have been reading to switch...

I just ordered a hub.

You do realize we're all Hubitat employees, right?

Good decision.
Now, how do i get my wife a house in mexico?

Rob a bank and run for the border?

Now, how do i get my wife a house in mexico?

To help with the issue we need. more information. With or without you.

LOL.... LONG story short, my company sent me to work in Mexico several years ago. It was temporary and I shared a rented house with a younger coworker who had relatives in the area. Him and his cousin set me up with someone that the cousin worked with and we wound up getting married a few years ago. I still don't 100% understand it but you get credits (I guess similar to Social Security) as you work year after year. She used those credits for a downpayment on a house and then we've been paying a monthly rate back to the government similar to a mortgage. It's nothing luxurious at the beach or anything; it's a smallish comfortable house that we use when we go to visit family. The fact that it mostly sits empty was why I wanted to load it up with smart things like bulbs, motion sensors, and door/window sensors. My (Wink) app recognized the hub but I couldn't link it to my account and I wasn't able to get anyone on the phone (out of business?) to help me. For the time being until I next go back, the house only has a Ring doorbell and two plug-in cameras inside the house aimed at the back doors.

Now, this morning, my Wink seems to be COMPLETELY useless. For the past week, I've at least been able to control the lights by my Android (but not on my work iphone). This morning I got my lights on and that's it. ~4 hours now and the app hasn't worked. I think they stole the last $4.99 x 20 of us left and walked out the door. My hubitat is on the way but I'm afraid it might be delayed with this snow on the east coast. It was leaving from Delaware today but who knows if that will happen. Aside from that, I'm waiting on an iphone 12 pro max for my wife and Samsung S21 Ultra for me but they'll probably be delayed in the shipping with the snow

They disconnected the phones as well. I would immediately call your bank and reverse the charge for the subscription.

LOL, I thought about that but the time I'll spend on the phone with my credit company is worth (to me) more than the $4 or $5. Now, I'll be sure to make there are no ongoing charges in the coming months however!

Something I forgot to mention in the last post is disconnecting the current devices from Wink without the use of ... Wink. I remember I was in a situation similar to this 2-3 years ago when I tried Smart Things and some of the devices gave me a REAL hassle because they wouldn't connect with ST since they were still "connected" to Wink as far as the device was concerned. One way or the other, I'll get it done though. Much easier having a shorter commute since I'm working from home

Wink has been down for a week and counting

The Wink smart home platform may be finally circling the drain. For the last week, customers have been reporting connectivity problems, and the Wink