Hi, I just bought two of these thermostat thinking they were to be working as good as with a smarthings hub. But to my surprise I cannot see the outside temperature on these unit as mentionned in the user manual. The driver is embedded in the Hubitat software and not editable.
Sinope has a driver available on their website but for smarthings only and they are not really helping with the problem sending me directly to hubitat support.
Everything else works but the outside temperature. I would really like this feature. I dont know where to look if I want to edit the default driver.

But to my surprise I cannot see the outside temperature on these unit as mentionned in the user manual.

The manual states:
** Feature available if supported by your Zigbee-compatible hub and its application

Now I asked these guys for all their manufacturer specific clusters, where this likely could be set, "Yeah, we're a little behind in our documentation", and I haven't received squat from them...

Irrespective of that, even if I knew how to twiddle this, the Hub doesn't have a built in source for exterior temperature, which would make the driver functionality dependent on some other source of data, so I wouldn't have implemented this anyway. In the second image there is the out 7.5
In the driver code for smart things the outside temp is managed with the postal code.
It replaces the set temp
https://www.sinopetech.com/wp-content/uploads/2019/03/Sinope-Technologies-TH1123ZB_TH1124ZB-V.1.0.5-SVN-503.txt

In the second image there is the out 7.5
In the driver code for smart things the outside temp is managed with the postal code.
It replaces the set temp

The second image is the wifi model I have. I was curious and went to ST forum reading up on the Zigbee model and you are correct. Here's a quote from ST forum
"As for the setpoint and outdoor temperature: you can select either one or the other from SmartThings. To have the setpoint featured on your thermostat display, you need to go in your thermostat parameters on SmartThings and leave the zipcode field blank. To have the outdoor temperature displayed, you put the zipcode in the field."

Not sure how the thermostat read the outside temp. Probably some kind of API.
Have you tried ported the ST driver?
@mike.maxwell

I am keeping an eye on this since I am getting a few soon.

ST uses their internal wheather service to populate this display value.
Hubitat doesn't have a whether service installed by default.
I don't port drivers from ST btw.

Is it possible to have an input field to enter weather service such as Apixu?
The ST porting part was meant for @glabbe0299

Is this thermostat for general purpose use? Or, only for electric heating? Does it do a/c?

I'm looking for a geral purpose Zigbee/Zwave thermostat that displays the current time (WAF).
Any suggestions?
(Besides which, I'm really tired of my Ecobee going down.)

yes possibly, but this isn't a priority at this time.

yes possibly, but this isn't a priority at this time.

as a side bar, while I'm not discouraging any one from development, taking on a zigbee thermostat (even if porting), is not going to be a training wheel device to start with...

Can anyone point me to the reference device driver? I’ll take a crack at it.

This one is for Smartthings.

HE won't give out their native drivers.

Thanks! I already started experimenting with this one; just figuring-out how must I reformat the ZigBee cmds to become a hubitat.device.HubAction type, and invoke sendHubCommand(HubAction)

Update: I have pretty much all the core commands working (set heating point, refresh) on one of my TH-1123ZB thermostats, just have to fix the HeatLevelUp/Down's (overly-complicated) logic, and then I can move-on to getting the weather.

So I got everything working; I’m just wondering how I could make the glue for outdoor temperature better.

Right now I just have gave the device a notification capability, then I’m using the OpenWeatherMaps device temp sensor, and passing-on the temperature through a triggered event through the rule engine.

@mike.maxwell; what attributes are you using in the 0xFF01 cluster to show/hide the time, and set the brightness? 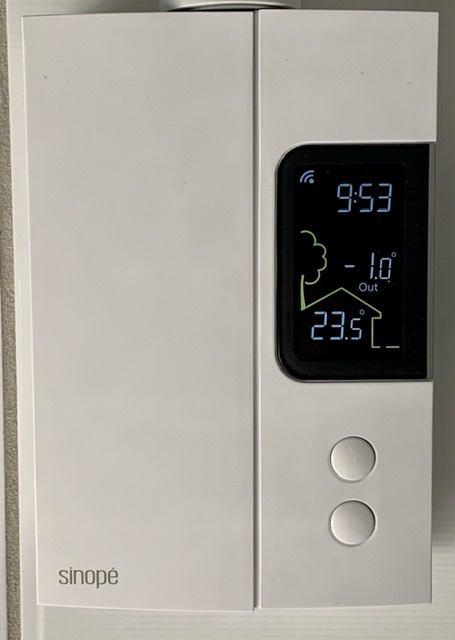