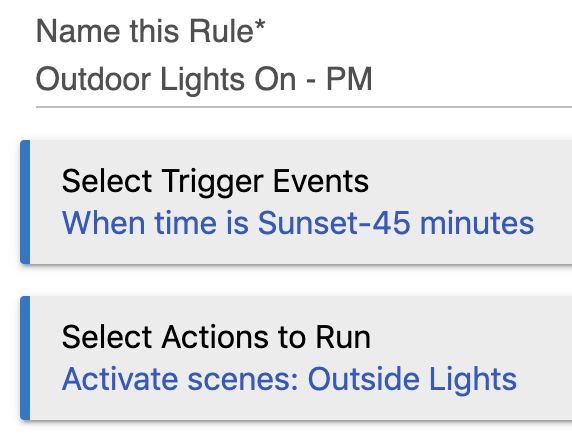 But when I go to create the deactivate rule, it seems odd that there's no companion "Deactivate scenes" option when defining an action.

Since a scene is represented as a virtual device, is it appropriate to simply turn off that scene's device in the second rule? 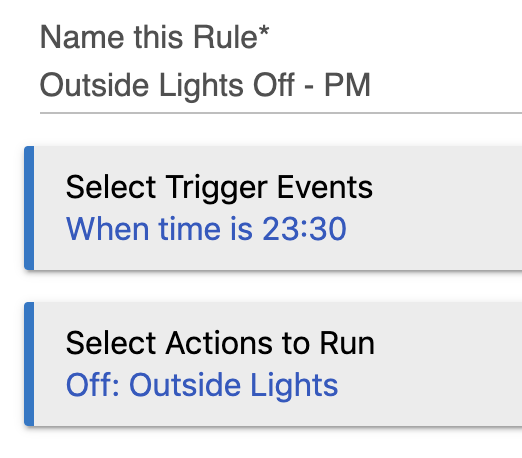 If using the scene device is fine for the "deactivate" rule, what is the value of activating the scene in the first rule as opposed to simply turning on the scene's switch device?

Since I encountered cases in which lights would not turn on when attempting to activate scenes via such rules, I replaced the activate scene action with a simple switch action to turn on the scene's device.

I'm still curious to find out the purpose of the "Activate scenes" option in rules actions.

Although I read the introduction to groups and scenes, it didn't answer my questions about activating and deactivating scenes in rules.

Groups and Scenes We have added a new parent app called Groups and Scenes. A new version of Group is available, and a whole new app: Scene. These two apps are similar, but function in distinct ways: A Group selects a collection of color bulbs, color temperature bulbs, dimmers and switches, all of which will turn on or off together, or change level, color or color temperature together. These are controlled by a created virtual device that has the same name as the Group itself. This device c…

I'm still curious to find out the purpose of the "Activate scenes" option in rules actions.

All it does is turn on the Scene device.

The icon on the dashboard for a scene has an "Off" and "On" button.

In the rules wizard, the best I can do is "Activate" a scene.

I dont see any "Deactivate" scene.

What are we missing?

All it does is turn on the Scene device

As all activate scene does is turn on the scene device, I would suggest all you have to do is turn off said device.
Maybe if it said 'turn on scene device' it would be more obvious but I think Bruce has answered the question.
Give it a try and see what happens.

It seems better to use the virtual device control action instead of the activate scene action in rules wizard.

But, now I have a new problem.

My scene works great with the button on the dashboard ON/OFF buttons.

But when triggering it with my smartthings button, the lights turn on as they should along with my harmony remote turning on the TV and Nvidia Shield, but then the lights in the scene power off again a second later leaving the TV and Shield on.

Actually its 3 outlets and 1 color bulb that turn off immediately after the button push that toggles the scene virtual device on and they arent even the same brand.

It seems better to use the virtual device control action instead of the activate scene action in rules wizard.

Both do exactly the same thing.

There is no such thing as "deactivate" a Scene. What does that mean? Turn off all of the lights in the Scene, or return them to their prior settings? What if part of the Scene is to turn something off? It would be better to think of activating a Scene as a one-way action. Then, you could have some other Scene or actions that represent "deactivate" that Scene, depending on what that actually means.

Doesn't the Scene Button in the dashboard suffer the same dilemma? It does have an "Off" mode, which appears to turn off all the items in the group..

To me, activating a scene is a way to not only turn things on, but set them to a specific value (CT, RGB, whatnot).

"Activate Scene" (or ON) turns a set of devices to a specific on/off/RGB/CT state. As an option, it could do an automatic capture of the current state before applying the scene.
"Deactiveate Scene" (or OFF) would then turn all the associated devices OFF.
"Revert Scene" would then grab that saved state (if it exists), and apply it. If the capture doesn't exist, then it would either defualt to "OFF" behavior, or do nothing.

An example of this would be a "Movie Mode" scene. it would grab a current state of the seleced devices, then apply the scene. When the movie is "over", you could "Revert" the scene to the previous setting.

In fact, the more I think about it, maybe it should be activate, deactivate, and off, with "deactivate" being the "revert". It could even be set by option in the scene...

In fact, the more I think about it, maybe it should be activate, deactivate, and off, with "deactivate" being the "revert". It could even be set by option in the scene...

These are interesting ideas. I will look into it.

BTW, you can already stop Off from turning off the devices in a Scene.

Oh, this will help simply the rules for my garden spots! I have them set to an accent color (via a scene) until there's motion, which activates a scene that puts them into white-only. Having them restore back to the accent color has been tricky (since I have different accent colors for fall, Christmas, winter, etc).

Same for me and my driveway color lights... I leave them a color "by season" (i.e. Christmas time, one is red, the other green), but, when the garage door or front door opens, they all turn white 100%, and then when I'm done, they revert back to the previous scene. The capture and revert will save me having to have additional rules options to do the revert once they close.

Just read this thread and love the collaboration! One thing that still is not making sense to me is that when I have an action to activate a scene (eg. Tv at night) when the motion sensor is active. The previously activated scene (lights out) is still showing as “on.”

The rule is supposed to activate "lights out" again once the motion sensor has been inactive for 30min.

Hopefully, my screenshots will help explain l/show any problems with my rule. Thanks for any help! 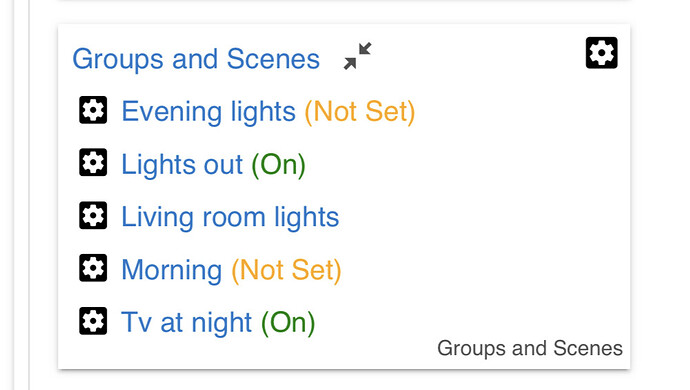 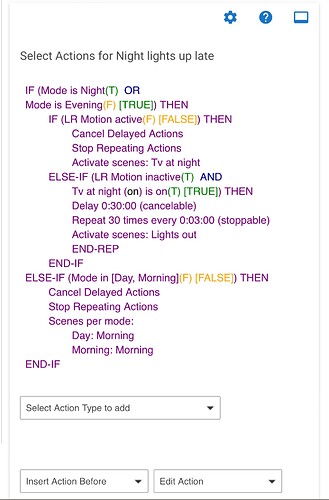