Not sure if this is the proper subcategory but here goes:

Looking to activate an Iris Plug which operates a wall heater in a bathroom.
Iris Plug communicates with an Ecobee Sensor in the bathroom.

I was able to do one rule with only one time frame, and unable to rename this SAR. Unsure if I could create another similar rule separately for the second time frame.

Any help would be greatly appreciated. Thank you.

You can create as many SARs as you want. Sometimes having separate rules is the only way to do things. So you can go ahead and create one Simple Automation rule for 7-8 am, and a second rule for 7-9 pm. Nothing wrong with that.

@bertabcd1234 - Unfortunately for all of us I have some free time this AM and found this interesting to play around with. Just wondering, if one were to write a "between two times, two times" rule in RM, would this be an efficient approach? I'm betting you know a better way...interested generally in the best way to handle something like this in RM. 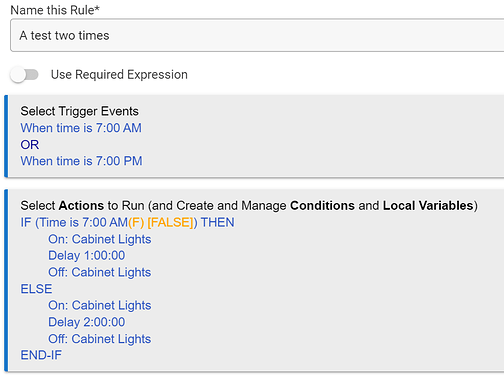 From the hub's standpoint, they'd be about equal (minus the bit of extra work it has to do to process the actions, including evaluating the conditions)--it's just a matter of whether you have one app that schedules a job for 7 AM and another for 7 PM, or one that schedules two jobs.

A third approach is to trigger at 7 AM, do the first set of actions, add a "Wait for event: time is 7 PM," then do the last set of actions. This rule will schedule something at 7 AM then add a subscription for 7 PM when that action is reached. It's cleaner than the above rule, but a bit more fragile in that the 7 PM stuff won't happen if the 7 AM schedule was missed that day for some reason (e.g., you were rebooting for an update at that exact moment). Not saying it's better or worse.

Thanks for the additional info and context. I had thought about using "Wait" to write it as you note, but ended up choosing the conditional approach for no explicit reason, other than maybe I think the If/Then structure looks cooler.

Thanks everyone for all of your help. I think i have it running with a simple automation rule.

As long as you're exploring options/approaches, one tool you could take a look as another option for your automations is Event Engine. It's a "point and click" app that allows you to create automations with a wide range of complexity, from very simple to quite complex, by selecting devices, options, and settings in the app. Covers the range from Basic Rules/Simple Automations up to Rule-machine level complexity.

Event Engine - This is not available in HPM, it's installed from Bundle Manager, next link below:

[RELEASE] Event Engine - Automate your world with easy to use Cogs. Rev up complex automations with just a few clicks! Custom Apps

Introducing 'Event Engine' Automate your world with easy to use Cogs. Rev up complex automations with just a few clicks! Features: Tons of features! Too many to list here, but here is a small summary. EASY to use interface with built in hints, just hover over the - Info - tags! Create virtually unlimited Periodic Calendar based triggers. Create your own or use premade expressions. Conditions include Time/Day/In Between/Sunset/Sunrise, Acceleration, Button, Contact, Energy, Garage Door, Glob…

Introducing 'Bundle Manager' The place to explore Bundles. Find, install and update bundles quickly and easily. Bundles are an easier way for Developers to maintain and distribute their work. It also makes it much easier for any user to install the apps/drivers/libraries they are looking for! Requires HE version 2.3.2.130 or above Features: Simple, streamlined interface Powerful search features. Search by 'All Bundles, New Bundles (last 7 days), tags, developer, contains keywords and doe…