Hello,
Has the Generic Z-Wave driver been updated to support multiple positions? (Like a dimmer switch for a light?)
Or is there a different driver that has better support for Bali/Somfy Shades? The Generic drivers works fine for On/Off but it would be nice to be able to set them to 50% (or any position)

What driver are you using? Generic Z-Wave Shade? If so, that has a "Set Position" command. This is the analog of "Set Level" for dimmers, but it's the shades-specific command (perhaps usable with a smaller subset of apps, which is why some older drivers expose more, dimmer-esque capabilities, too, but nowadays you should be good with most...so if that's a problem, mentioning what you're doing there would be a good idea, too).

Thank you so much for the reply. I should have mentioned that I am integrated with Google Home and that Google Home only allows for "On/Off" using the Generic Z-Wave Shade driver. I know there is a separate Google Home Integration App for Hubitat (that seems like it may be awesome) but I am trying to avoid all of the setup because this is really the only issue I have. It seems like any shade driver should support 0-100% of positions. I keep Hubitat hub updated regularly and was hoping an update to the shade driver was there.

Hello,
*Repost in hopes of an update.

Has the Generic Z-Wave driver been updated to support multiple positions? (Like a dimmer switch for a light?)
Or is there a different driver that has better support for Bali/Somfy Shades? The Generic driver works fine for On/Off but it would be nice to be able to set them to 50% (or any position)
I'm integrating into Google Home.

*Repost in hopes of an update.

Hi there, you don't need to start a new post to get updates on previously raised issue. Replying to the same post is just as effective.

To address your question (which has been merged into this existing thread now, as you see) again, the answer is still that what you want already exists: the "Set Position" command will set the blinds to any postion, 0-99 (or sometimes 100, though this is technically outside the "raw" range Z-Wave uses for these values). This is usable by a variety of apps on Hubitat.

A different question is whether Hubitat's built-in Google Home integration supports a way to effectively call "Set Position" by voice. That I don't know, though your experience suggests not. The Google Home integration would have to be updated to support that if it doesn't. The driver is unlikely to change (and it's not really the best way to approach this issue long-term), though perhaps someone has one somewhere you could use to "trick" Google Home into thinking it's a dimmer (do be aware that this may have unintended consequences if you tell it to do things like turn off all the lights). I do not know of any specifically for this device or Z-Wave devices in general though perhaps someone else does. If nothing else, you could create a virtual dimmer on Hubitat and "sync" that to the blind positions, though that's a bit of work...

I think you are correct. In the research I've done, the dimmer driver "functions" exactly like expected except for the Google Home integration seeing it like a light (which is what you said).
It just seems like the shade driver should be written similar to the light driver but where Google Home would recognize it as an actual shade with positions from 0-100% in positions. I'm assuming that the other Hubitat Google Home Intergation tool has this handled.
I'm not as experienced as most in this group but I do love the Hubitat Hub and overall works really well and fast!

Do you want the shade position to be infinitely variable or would you be OK with a few pre-set positions?

I haven't tried what you ask (yet).

I have 5-Button Picos setup for my shades (or groups of shades) that open/close the shades to pre-set positions corresponding to the Pico button pressed.
Top Button ("On") = Full Open
Next Button ("Dim Up") = 75% Open
Middle Button ("Favorite") = 50% Open
Next Button ("Dim Down") = 25% Open
Bottom Button ("Off") = Full Closed
I find this so convenient that I never tried to add any shade capability to Google Home.

What I am thinking is whether you could set up virtual buttons in Hubitat that you could then add to Google Home . . .

I will try and play with this later this week - I'm jammed for time today.

Just for giggles I tried to see if I could add the Pico to Goggle Home - no dice, it rejects it as an incompatible device.

I really appreciate your efforts. I see many people have been down this path. The Shades are Bali using the Somfy motors. I'm not suffering too bad but would be nice if it just worked as expected.

It just seems like the shade driver should be written similar to the light driver but where Google Home would recognize it as an actual shade with positions from 0-100% in positions.

The shade driver is correct and complete, written using shade capabilities. It is the role of the Google Home integration to expose shades (and commands to manipulate them) to Google Home, which it sounds like it does not at the moment. (There are some older drivers that used the dimmer-esque capabilities; Hubitat is seems to be moving away from this direction, so I wouldn't expect that to change. The Alexa integration was recently updated to support shades as-is. Google Home seems like an unfortunate omission at the moment.)

I'm assuming that the other Hubitat Google Home Intergation tool has this handled.

I do believe this is correct (though not officially supported, of course). I haven't used it so can't comment for sure--just what I see with a quick search. So, that's another option if the other workarounds don't seem appealing.

Just for giggles I tried to see if I could add the Pico to Goggle Home - no dice, it rejects it as an incompatible device.

Yeah, buttons don't normally accept commands, just generate events, so telling Google to "push button 1" or whatever is a bit odd (though technically Hubitat's button capabilities do require these commands now, which on most devices would just simulate a "digital"/virtual event).

But you could still do something like this--maybe a few virtual switches. Enable the auto-off option to turn them off shortly after turning on, making them effectively momentary. Create an automation on Hubitat that sets the blinds to a specific percentage when the switch is turned on, then turn on the switch from Google Home when you want to do that action.

What I am thinking is whether you could set up virtual buttons in Hubitat that you could then add to Google Home . . .

I haven't done this with Google, nor with shades, but my hot tub temperature was a lot easier to do with virtual switches exposed to Alexa. The theory behind what I did should be the same for Google though.

I created a virtual switch named "Hot Tub 101", and made a rule that if this switch was active, it triggered a rule to turn the thermostat to 101 degrees. For your blinds, you would just command them to a certain opening instead. You can name it whatever you want, it could be by percent (25%), closed/less open/medium/more open/full open, or whatever is easy to remember.

The virtual switch has an option to automatically turn off after a time, I used 1 second. I don't trigger the rule for VS OFF, just ON. The auto-reset to OFF makes it so you can run the command again, the switches don't get stuck in one state, and the rule doesn't have to reset them, so no weird logic to turn off other switches. 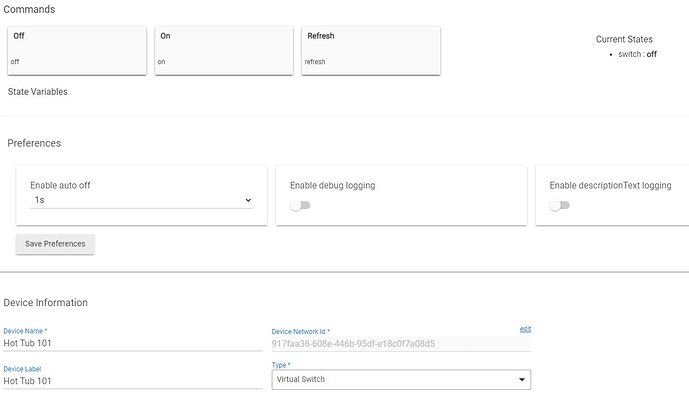 I just learned that Google Home will not accept a virtual button as a device it will control through Hubitat. So much for my experiment.

Google Home will not accept a virtual button

That is why I used virtual switch in Alexa (see my post above).

As @neonturbo says, virtual switches and simple Rules are an easy way to do this...

Aha! I see the method of your madness!
Thanks!

This is me on a good day.