I have eight of the basic element white dimmable bulbs and four of the element plus colour bulbs.

I have noticed that reliability and responsiveness of these bulbs is terrible with Hubitat. I am not using the sengled hub but directly with hubitat. For basic functions like on/off they are OK, but any time I want to use them in a more complicated rule to flash lights, change colours more than once, capture and restore, etc. I need to have a minimum of a four second delay between actions to make sure the bulb receives everything properly (I have only 4 lights included in the rule - all three on constant power except one which is not always on).

Has anyone had good luck with these things? They have been hugely disappointing from the start. I am wondering if there are settings that work better than others or if I should be using the sengled hub, etc? My current settings are the default driver that was automatically applied (seems to match hardware name) with both power level and colour set to prestaging enabled.

I've removed the 5 i had in my system, they were just to unreliable and seemed to cause issues with my zigbee mesh.

Thanks Welby. That is what I'm finding as well. The whites are OK, but man the color ones are just difficult from start to finish.

I only had the white element classics and they were bad haha.

My experience with the color capable Sengled bulbs is if I try to do anything at all involved or somewhat complicated, they do not respond consistently.

If I keep my automations really simple, they are okay.

Thanks. Do you use a Sengled hub?

I've noticed similar issues with most Zigbee bulbs, and the problem was not limited to Sengled. The issues I noticed sound similar to the above: on/off usually worked reliably, but trying to do a "Set Level" or "Set Color Temperature" (or both, as you might do with Hubitat scene activations) usually resulted in one or more commands getting missed. Sending what I wanted a second time, ideally after at least a small delay, improved reliability. Modifying the driver (it's one of the examples they published) to increase the delays by a couple hundred milliseconds or more (between its own Zigbee commands for these Hubitat commands) helped a bit but did not entirely eliminate it in all cases for me.

I got rid of the Sengled in my setup and returned to what I was doing before I tried this: using a Hue Bridge. ("This," by the way, was using a dedicated Zigbee-bulb-only Hubitat hub. If you're mixing bulbs with non-bulb Zigbee devices on the same network, that's possibly a recipe for problems, though it shouldn't be with Sengleds that don't repeat. Most of mine were Hue bulbs with a few Crees.) A Hue Bridge network works with most Zigbee bulbs except unfortunately (for you) Sengled and Sylvania/Osram as they are ZHA-only, and seems to be flawless in terms of how the bulbs respond to commands. Hubitat's Hue Bridge integration works well (the only disadvantage is the need for polling to bring in states from external modification), though I wrote my own to address what I consider a few shortcomings with theirs.

I do know staff are aware of issues with at least how some Zigbee bulbs seem to behave for UK users. My hope is that whatever they discover for those (whenever they get around to looking at that) will help us over here, too. I wouldn't be surprised if part of the problem was with the devices (one theory: Zigbee bulbs don't like receiving commands "too fast," perhaps for the same reasons ones that are repeaters make bad ones), but I also wonder if there's anything Hubitat could do to make this better (and to be clear, I'm not talking about their behavior as repeaters, just their behavior even when they're on their own network in terms of not consistently responding to all commands).

Instead of using the dedicated Sengled Drivers, I find the Generic Zigbee Bulb and Generic Zigbee RGBW Light drivers to sometimes work better. Just be sure to click CONFIGURE after changing the driver before testing.

I've found that, too. I think it's because the Sengled-specific driver simulates things like on/off commands with a fade by way of, effectively, repeated "Set Level"s (as the devices native on/off commands are abrupt, so I guess you would be stuck with that, but I liked reliablity better). So, if the guess about them not liking a bunch of commands "too fast"in a row is indeed the case, that is only likely to make it worse.

Has anyone had good luck with these things

I have 4 of the classics, 5 color plus and 2 of the br30 color plus bulbs. All have been working great. I use some of them with lutron Pico's and they respond almost as well as the lutron dimmers do.

Has anyone had good luck with these things?

I have several Sengled soft white bulbs and they work fine. I am using the Sengled Element Classic driver.

I also have some Sylvania/Osrams, but they run on a separate Hubitat hub.

I have about 12 of the classic bulbs around my house and an additional 7 that are grouped together in a light scene for the basement. I will say that they have the 100% reliable but I do have repeaters strategically placed around the home. Out of all the smart bulbs I have tested these have been the most reliable for me.

I am using the Sengled driver on the Hubitat but I also made sure to update the firmware on the bulbs with my old SmartThings hub. The last batch of bulbs I purchased were behind on the firmware and that was about 8 months ago. I do hope that we get firmware updating on the Hubitat soon.

I have about a dozen of the classic white bulbs. I use the Generic Zigbee Bulb driver. Mostly because I like the instant level setting vice the fading up and down of the Sengled driver. They don’t affect my mesh at all because they aren’t repeaters. That’s one of the main reasons that I use them. I haven’t had any trouble with them but like I said they are just the white bulbs. I use them in groups, scenes and rules with no problems. I would buy more if I needed more bulbs. They just work.

Has anyone had good luck with these things?

I only have 4 Sengled Color Plus bulbs on a mesh with about 55 Sylvania RGBW bulbs, recessed lights, and light strips. I haven’t had any problems with them, but I send most commands (CT and level) to the light group (of 4) using zigbee group messaging. I am using the Sengled driver with these settings: 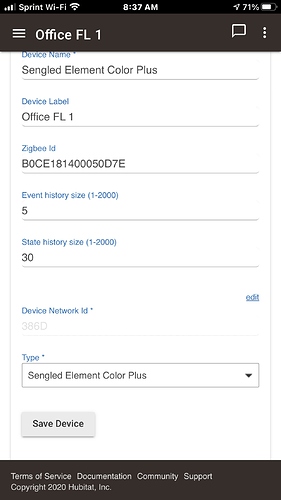 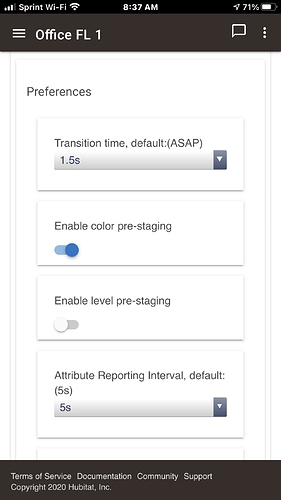 I have 6 of them and initially I had some issues but, per a recommendation, I installed a zigbee repeater (plug) and they have been rock solid ever since.

I have approx 15 A19 Sengled, 1 color Sengled and maybe 10 Sylvania bulbs. I don't have any issues with any of these bulbs. They all come on reliably and quickly. I don't flash any or change colors too much so I don't know how they would react but I couldn't be more pleased with them.

I have one of their color bulbs. No issues w/reliability, it comes on and turns of as requested. I did have to slow down an automation that turned on and changed color from 500ms to 1s delay. So they are probably a little slower than Hue bulbs. But for my uses (warning/notification lighting) 500ms vs. 1s is irrelevant.

I have several of Sengled color and white bulbs. No issues at all - with the bonus that they haven't interfered with Xiaomi sensors on the same mesh. To be fair, I have 5 Tradfri outlets, 6 Tradfri repeaters, and 4 of @iharyadi's sensors as repeaters on that mesh - so I'm guessing it is a strong mesh.

I did have to slow down an automation that turned on and changed color from 500ms to 1s delay. So they are probably a little slower than Hue bulbs.

I am guessing that any type of delays are only required when using the "Sengled" Hubitat drivers. These drivers emulate a smooth ramp up and ramp down when turning the bulbs on and off. Thus, the driver is pretty busy sending Zigbee commands to the bulbs to accomplish this. Personally, I would rather have reliability and fast performance. Thus, I choose to the the Generic Zigbee Bulb (for white bulbs) and Generic Zigbee RGBW Light for color bulbs.

Hey, Dan. I am using the generic Zigbee RGBW Light driver. This was an automation using the Event Engine app, and I simplified my description for brevity, but to elaborate - Initially the part of the automation that turned on the Sengled bulb and set the color was not successful. That was using 500ms. When Brian slowed the automation to 1s it started working.