I have nine Schlage Z-Wave locks in my home. They all work beautifully!
Lock Code Manager now runs cleanly with 10 users!
finally

It was a long and painful odyssey. Many folks here contributed tidbits of info along this long voyage. Thanks!

The Ship (My hardware):
— Hubitat Elevation® Platform Rev C-7 Version 2.3.0.116
— Schlage BE468/BE469 Z-Wave Locks: 9. Several are non Z-Wave Plus, several are Z-Wave plus. I have no clue as to their internal version numbers. I have used them out of the box, and never updated them. They are using the Hubitat Schlage BE468/BE469 Lock driver.
— Range Extender 6, and 7 repeaters: 8 near the locks, using the Hubitat Generic Z-Wave Repeater driver.
— other Z-wave stuff.

The goal of the Odyssey: Make all my locks work in the mesh and with Lock Code Manager.

How I got here: I have lots of outside doors, we travel a lot, I needed remotely managed locks. While on Wink, I chose the Schlage BE 469s. Wink stopped development, and could not handle new Schlage Z-Wave Plus locks. Off to Hubitat, then.

The voyage begins: Adding Schlage locks to Hubitat was a massive pronlem, as your earlier readings here in many threads will attest. To kick the earlier problems with Hubitat's mesh, per your advice, I added 8 repeaters near the locks. I still had problems adding these locks. Now Hubitat has fixed the mesh issues, so maybe the repeaters weren’t all necessary. I’m happy, though: the house covers 4,200 sf, two floors, an outbuilding, several steel-clad doors, several aluminum-clad walls. The locks add easily, now. The mesh is strong and extensive.

More storms along the way: Lock Code Manager (LCM) was a huge pill. It failed with some users on some locks, others on others. In frustration, pressed for time, especially as I added new locks as time went on, I manually entered codes for people at the lock.

The logs are a pain. I couldn’t tell which users failed with each lock. I finally realized I should delete the failed jobs in LCM, and that would then show which locks were the problem for each user. Eureka!

I then went to the Device Manager page for each lock, and began to delete the codes which showed no username. After this LCM could add a code for that user. I then realized the locally-entered code for that user showed as a no-username-name “????”, and that code duplication was causing LCM to fail for that user on that lock. It even showed in the Logs page for the lock while LCM was running. But also, if I ran Get User Codes on the Device Manager page for that lock, the missing username would show up on LCM’s display for that lock with a Null username. So I also deleted that user in LCM, and reran LCM to add a user to that lock. I then used the DM display repeatedly until the Null users and the null user code positions were erased on each recalcitrant lock.

Then finally, came a final lock which I had reset in testing while trying to unscrew the LCM mess. It had been easily removed and re-added to the mesh (now cleanly functioning thanks to Habitat's work over the last year or so), newly factory reset, then my personal local admin code locally replacing the lock's, all the default local users removed locally, and the lock locally set to 6 digit codes.
Not one user could be added to the lock using LCM!
So I added a user locally, manually on the lock, and saw in Device Manager the new Null username associated with a new code position. I then added one of my users using the Device Manager (DM) display which asks for the code position, code, and username, then used the DM Get Codes function, and refreshed the DM page, and saw the newly added user in the DM output, along with the null user. I then tried LCM to add another user to the lock, and voilà, the lock accepted him!
Hallelujah! LCM now fully manages all of my users on all of my locks with no reported errors!

The manual for LCM needs updating….

(Now, there is one sorely-missed Schlage feature absent on Hubitat, which was available with Wink’s far superior Schlage user interface: the ability to enable and disable autolock from the device interface.)

Nice write up. I have two Schlage's at home and once I setup, which took brining the lock to the hub initially, they have been working well. Even the code manager seems to work well even though I haven't had to change codes for a while, I added my family to the lock using that utility.

I have been handling auto-lock with rule machine vs adding any additional configuration via their programming codes.

I moved my Schlage lock to SmartThings some time ago because the battery life was really poor when using Hubitat.

I'm now installing a second Schlage 469 and am wondering if there has been any change in the Hubitat driver aimed at the battery life situation. I would prefer to use Hubitat, but I was only getting a couple of weeks on the batteries. I'm getting many months of life using SmartThings.

I'm getting just over a year with my Schlage BE469ZP (Z-Wave Plus). I changed out the guts on my two BE469NX (non-Plus) locks (thereby converting them to BE469ZP) because the S0 security pairing (3X packets) was giving me about 3 months battery life. Changing to BE469ZP, with S2 pairing on my C-7 when the C-7 came out (replacing my C-5), increased the battery life on both locks to just over a year.

Thanks! My new lock is a Plus. I should give it a try.

I am getting many months-to-a-year on all my locks, both non-Zwave-Plus and Plus. I have 8 repeaters, as well, so they are likely helping the locks keep connected with a minimum of power. (All the advice from earlier recommended using repeaters, even one per lock, so I did so. Adding Zwave devices since then has been a breeze.)

How? Can you please assist someone who wants Auto-lock functionality with instructions?

Howdy!
Unfortunately, the Hubitat Device manager for locks is fairly basic, and does not include Schlage functionality for autolock.

However, I always want my locks to autolock, and I live in my home where the locks are, so can easily make-do without remote access to autolock enable/disable. So I use the Schlage built-in programming codes on-lock—>
- Go to the lock,
- enter the Administrative code, then
- tap the 9 to enable or disable autolock on that lock.

Appreciate the auto-lock feature code instructs, but I am trying to get more flexibility using Rule machine and was hoping the other commenter would share his rule(s). 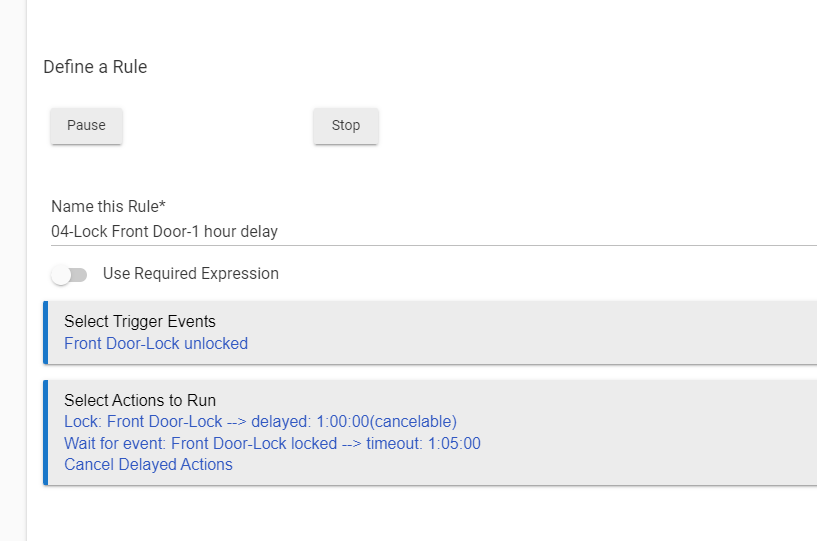 Thanks @ronv42 ! I watched the youtube videos on Rule Machine and played around and came up with this rule and it works great!

I have Schlage BE469ZP (Z-Wave Plus) lock that used to work well with ST. Now, I am trying to implement it on Hubitat and I am getting nowhere. I can not pair the lock and Hubitat hub. I have moved the Hubitat hub to be 10 inches from the lock. I am getting to the point where I see a message telling me that the z-wave device has been discovered and after that the device is completing bootstrap. Initialization should follow but it never happens.
As you can imagine, I have tried factory resets and exclusions.

I am no expert, but every time I have a problem adding anything, it’s because there are devices with errors in the z-wave mesh. Read up jere on ghost devices, as well.

Ensure there are zero errors, then add the fairly-finicky Schlage lock.

What's the point of logging?

I have the same issue with 3 of my Schlage locks. I think I found the issue and it boils down to the lock firmware. The 2 locks that work are on 0.10.9 and the 3 that do not work are on 0.10.8. I called Schlage and was told that they do not support firmware updates and that I would need to purchase new locks at $282 each. I decided to just move all locks back to my old Smarthings hub since they work perfectly with it.

You all might try this... It has basic lock/unlock functionality, and at least it stays on the network. Once I figure the code lock-code thing out, I'll add it back.

The crux of the story is, the "built in" driver changed a few years ago, and it is currently borked, but hubitat staff won't accept that, it's got to be the <mesh, lock, weather, act of god, etc>. An 4 y/o custom driver still worked for lock and unlock, and persists through reboots, but doesn't currently work with Lock Code Manager, so I am trying to reengineer it.

Schlage Locks - It's the built in driver, stupid