[RELEASE] Tile Master - Display multiple devices that can be Controlled from the tile!

Is there a way to change the line spacing ?

Nope, my original version had all kinds of options like line spacing, bold, italic, underline, strike through, etc... but with the 1024 character restraint, they all got booted. The html to create them was just too many characters.

Hi Bryan,
I noticed that my hub is slower than usual. I added some devices (added more caseta switches but they are managed by the bridge, added 2x Zooz ZEN15 and 2x ZEN20).
I also managed to display of the power consumption with your TM and the log is filled a lot with realtime changes. In the Zooz settings, I choose 5 minutes for reporting power and energy but it seems that every change is instantaneously recorded. So, I'm guessing if that non-stop logging could be the culprit of that slower hub ? And what can I do to avoid that ?
Thank you
CC to @agnes.zooz 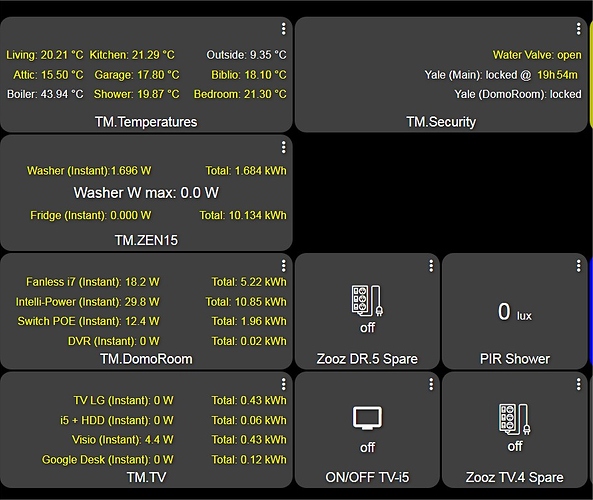 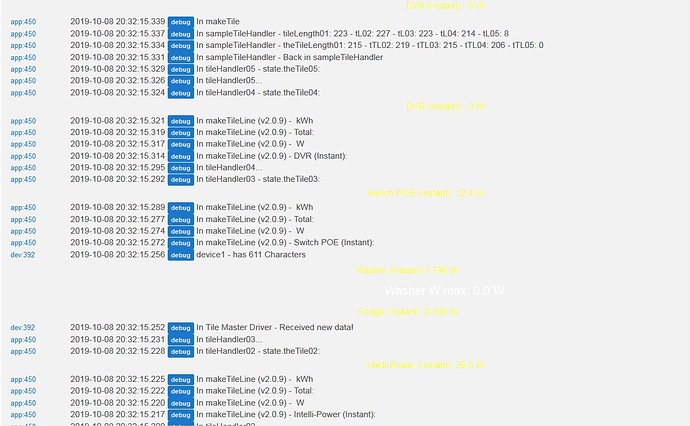 Tile Master will update anytime the device updates. Check the logs of the devices to see what's going on.

Checked and installed Hub Watchdog (thx again, nice apps you made).
One of my Zooz 20 (a fanless i7 running W7) is always changing its power (normal) because it runs different apps (file and cam server). So the log is always updating.
I'll increase the threshold in the settings (15w instead of 5) to lower the updates and see what happens. Maybe it's the culprit ?
Btw, Hub Watchdog displays a value of 0.207 and counting.

*Edit:
changed the threshold for 15W, Zooz Zen20 is way shorter now (less updates), discovered that one of my ZEN15 (Fridge) power data was updating every 30 seconds ! 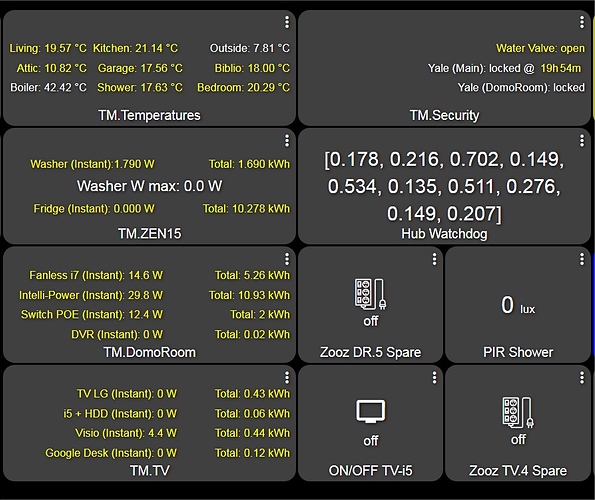 I was just going to reply that I thought your Power Reporting threshold was too low but you just updated your post. I have a dehumidifier connected to a ZEN15 that goes up and down and I think I have the threshold at 50W.

30 seconds is the lowest Z-Wave will allow but some devices with older firmware can even report more often than that. We always recommend decreasing both the frequency AND reporting threshold to make sure the amount of reports sent is minimized, especially for devices that produce a lot of power fluctuation (any inductive load).
It's especially important with devices like the Power Strip which should really be counted as 7 separate entities since it will send unsolicited reports from 5 outlets, 2 USB ports, and the master device (combined readings and status updates).
Glad to hear it's working better now!

Hey Bryan, I found a little bug in the latest update, when you click use custom colors on the 2nd column (so far I've found it on rows 1 and 2) it changes the value of the attribute to be the same as the 1st on the Tile only, the value on the setup page still shows correctly) i'll try to get a screen shot to better explain what i'm seeing, whats really weird is I created another tile for contact sensors and it seems to work correctly, maybe something to do with the Attributes themselves. or it's my Hub the thing's been kinda nuts latelyClicked|690x388 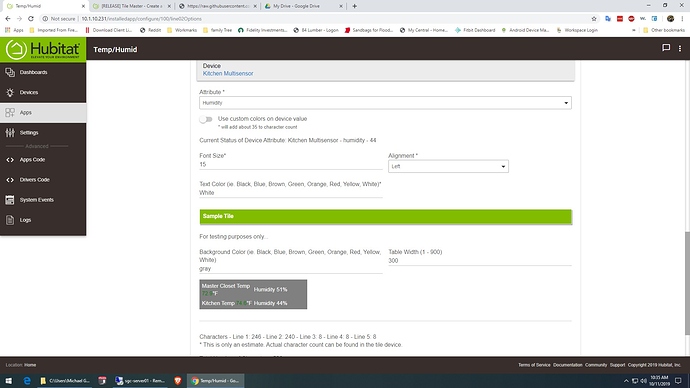 I took a quick look through the code and didn't see anything. I'll need more info please.

Thank you for looking into it. when I get a chance i'll try and dive deeper into it and get more information for you

Hello @bptworld,
Thanks for very useful app.
I have a question regarding SharpTools - it is possible to display your tile on SharpTools Dashboard ? I tried to, but i see only this: 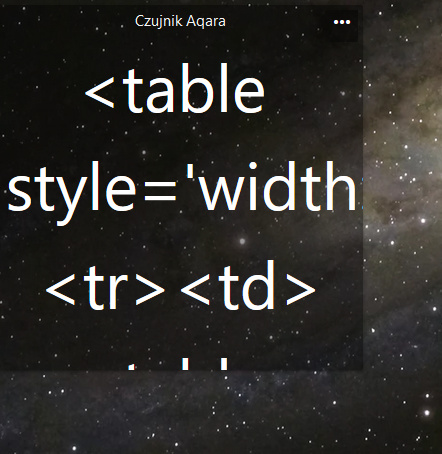 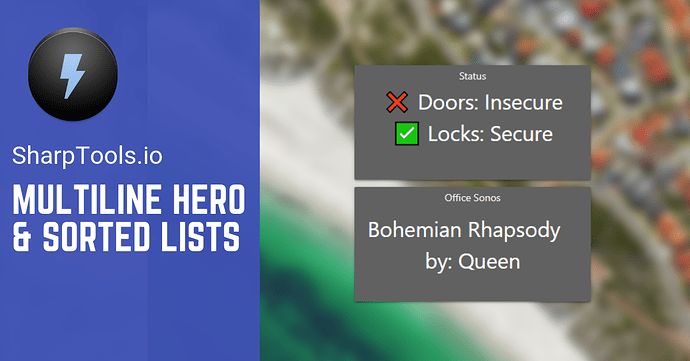 Thanks for very useful app.
I have a question regarding SharpTools - it is possible to display your tile on SharpTools Dashboard ?

Thanks!
The tiles are definitely created with Hubitats builtin Dashboards in mind, so others may or may not work. I don't use SmartTools so I honestly don't know. It looks like it's not converting over the HTML used in Tile Master. Maybe @josh could shed some light on this.

Thanks for tagging me! We don't allow arbitrary HTML in Hero Attribute tiles at the moment.

The short version of it is that allowing arbitrary HTML to be rendered is a security concern, so the SharpTools Hero Attribute tile displays text only.

We're open to the idea of allowing a whitelisted subset of HTML tags (like basic table / text formatting that appears to be used here), though we'd need to determine what should and should not be included in the whitelist.

In the meantime, the SharpTools Hero attribute tiles have the option to maintain white space and traditional line breaks (eg. \r\n) as you noted.

Great app @bptworld ! I'm like a little kid with a new toy!

Hello
can we have a link to a dashboard. I like to use it as an overwiev but when I click on it to go to a detail dashboard?
Thanks
Larry

There is already a link option available on the tile.

Thanks for quick answer but still not get it. Should I use wlink option and if yes how I can link to a dashboard? or is something else which I am missing?
Thanks
Larry

Every dashboard has a web link associated with it. Put that link into a URL shortener and then use that shortened link in Tile Master. Now you'll have a clickable link on a tile. 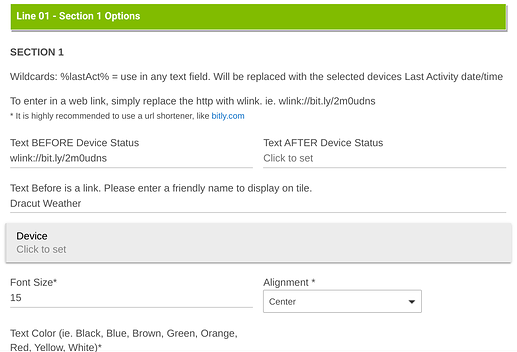 thanks. I did not know the dasboards have that link. I see both of them, cloud and local.