. Now i have a need for a power draw monitoring plug with a fast response time. I don't care about cumulative kw/h or anything, just real time draw so i can determine when the device is active or in stand by.

Thing is, i don't really know how monitoring works in detail as I don't use it. I have a strong aversion to chatty devices. I assume that power monitoring plugs are proactively chatting their current status every x number of seconds?

Any recommend plugs (zigbee or z wave both good, or i guess lan with local integration also okay because i suspect this is one area where a separate app with a hubitat plugin running locally might introduce some capabilities beyond HE's power monitoring abilities)

There's a few other threads floating round at the moment, one on wifi plugs, but there are other suggestions included

Hi Chaps, I’m looking around for Wi-Fi plugs with energy monitoring that integrate easily with HE. I know there is the tp-link plugs kicking around. Can anyone recommend anything that’s easy to track down and not cost me an arm and a leg. Cheers Carlos

@giudicistefan You could do an iotawatt for larger things, and Sengled outlets for smaller. I would avoid the wifi if I could

What do you mean by fast response time? How fast it reports when it reaches a certain wattage or how frequently it reports the change? For power reporting my preference is:

Just order 4 Sengled NB7 Zigbee outlets with power monitoring. If there's a power outage do they go to last known state (On/Off) when power is restored?

The Zooz Zen 15 is great especially for appliances or heavy loads. I don't recommend their other plugs, they seem to be problematic. The 15 has lots of adjustments and can be anything from a very chatty device, to a slow talker, or no reports at all.

Okay more specific question. Is there a power monitoring plug which has a device parameter for reporting based only on increase/decrease in wattage/current draw rather than time based? I have a device that is always on but when in use uses way more power than when on standby. I want to turn on a light when the device is in use, so i want the power monitoring plug to send a report within a few seconds (at the latest) of the wattage spiking. However, I do not want this device sending it's current watt use to the hub every 5 seconds so the hub can do the math and trigger the automation. I want the plug to stay quiet until it recognizes the power has increased, then report the power increase. Is that a thing?

want the plug to stay quiet until it recognizes the power has increased, then report the power increase. Is that a thing?

Short answer, no. Is not a thing.

Long answer. You have to think about event streaming. If your sensor is in "quiet" mode, then how would it know when it's time to be hyper active. Most sensors can be set to report based on time frequency or percent of change, or a combination of both. You can make a sensor kick in a hyperactive mode, but you'll need to use a custom driver. I am not aware that one exists, but it can be done.

@bobbyD
To be clear, i don't care if the plug itself is sampling the power usage every microsecond, by "being quiet" i mean i don't want it sending reports to my hub constantly, only when the power draw jumps considerably, and ideally very quickly thereafter.

Wouldn't percentage change reporting basically be what I'm asking for? I just don't want it sending power draw on a timeline basis, cluttering up my hub reporting how much power it's using on standby 24/7 in order to be able to detect a change on the hub when it's actively being used for a few minutes a day. When being used the power will skyrocket from probably 5 watts to hundreds in this case (item has a chonky motor). If the plug features such a percentage change trigger for reporting, wouldn't i be able to set it to say 50%, disable any time based reporting or polling and expect the hub to only receive data from the plug when it's actively used and the wattage jumps and then a minute later when the wattage tanks and it goes back into standby (without 20,000 reports all day saying "wattage: 6w, wattage 6.05w, wattage 6.1w" in the interim)?

Wouldn't percentage change reporting basically be what I'm asking for?

Yes, and I missed one other common preference in my previous post: change in wattage. For example the Generic Zigbee Outlet will let you set the number of watts (+/-) before it records an event. That might be something to consider. A Wi-Fi device that doesn't report back to the hub without polling would be harder to customize % or wattage change, because you'd need to poll it constantly from the hub in order to get the wattage and then suppress posting the event - so that will still hammer your hub with 20,000 reports all day long, even if you don't see them listed. 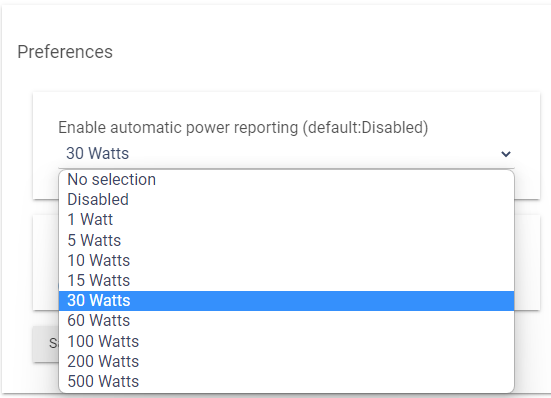 Wouldn't percentage change reporting basically be what I'm asking for? I just don't want it sending power draw on a timeline basis, cluttering up my hub reporting how much power it's using on standby 24/7

Yes, I think this would work for you. Or the Watts change set appropriately high. If you putting this on something like a wash machine, these settings or something similar would probably work fine. With mine set as shown below, the Zooz Zen15 doesn't spam the hub...